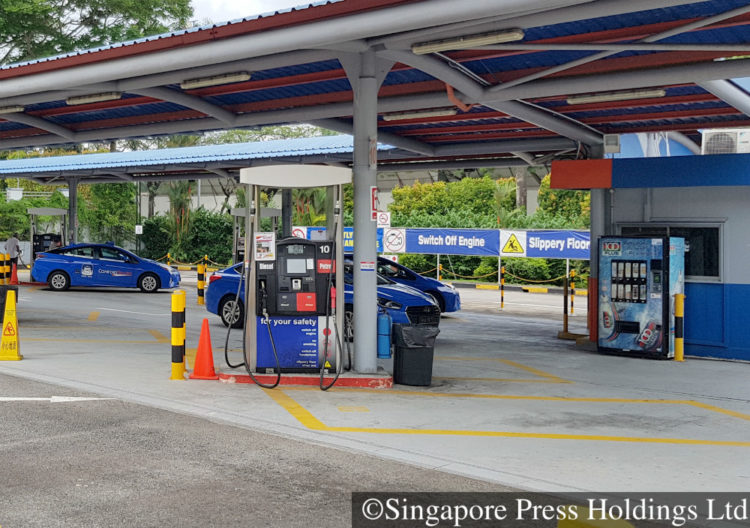 Petrol pumps at ComfortDelGro’s Sin Ming Drive premises are understood to have been operating for close to a year. Petrol retail in Bukit Batok started towards the end of last year, and two other company-owned locations are set to offer the fuel later this year.

Transport giant ComfortDelGro has started a petrol station business to serve its growing fleet of hybrid taxis, and possibly a larger fleet of private-hire cars once its alliance with Uber is approved.

The Straits Times understands that petrol pumps at ComfortDelGro’s Sin Ming Drive premises have been operating for close to a year, while another in Bukit Batok started up towards the end of last year.

They will be joined by petrol pumps at two other company-owned locations later this year.

ComfortDelGro and other taxi operators have been selling diesel at discounted rates to their cabbies since the 1990s – a lucrative business which contributes tens of millions of dollars in profit each year.

But ComfortDelGro is the first to enter petrol retail. The move came after it added the Toyota Prius hybrid to its fleet in 2011.

According to the Land Transport Authority, hybrids now make up 18 percent of Singapore’s total taxi fleet of around 23,000.

Like its diesel, ComfortDelGro’s petrol – available only in 95-octane – is priced lower than fuels sold at commercial pumps outside. It is currently retailing at $1.56 a litre – about 30 cents lower than the discounted rates offered by oil company-owned stations.

ComfortDelGro gets its fuel supply from Caltex. Asked why it was supplying to a competitor, Caltex said: “We are supportive of a healthy, competitive environment, and believe trade should also be fair… We are not against approved ancillary pump points required by transport-related companies to serve their own fleet of vehicles.”

Cabby Phua Cheng Guan, 66, said he has been using ComfortDelGro’s petrol pumps since he started driving a Prius cab seven months ago. “It makes sense, since the price is a lot lower than that outside.”

Like other observers, Mr Phua expects the pumps to be opened to Uber drivers if ComfortDelGro’s alliance with the US ride-hailing company is approved.

Mr Elliot Lin, 33, who drives for Uber’s Asian rival Grab, said the pumps “will be another draw” for private-hire drivers.

Others said the prospect of cheaper petrol might even encourage motorists to start driving for Uber. ComfortDelGro was not available for comment.