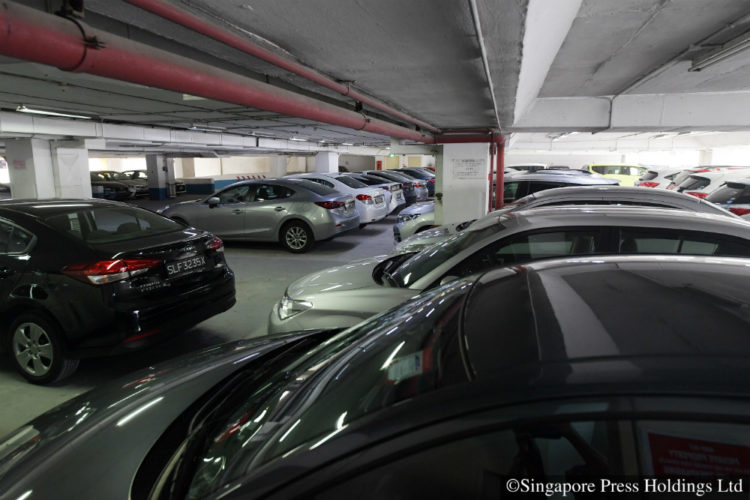 Lion City Rentals’ cars at the Parklane shopping mall carpark in Selegie Road. It has a fleet of about 14,000 vehicles that account for the bulk of Uber’s supply of cars in Singapore.

It said in a statement that the deal, which is subject to regulatory approval, is valued at about $642 million, with $295 million in cash.

The news comes more than three months after a likely alliance with Uber was announced in August.

Lion City Holdings operates Lion City Rentals, which has a fleet of about 14,000 vehicles that account for the bulk of Uber’s supply of cars in Singapore. Uber will retain the remaining 49 percent stake.

With the joint venture, ComfortDelGro’s taxis and Lion City Rentals’ private-hire cars will come under a centralised fleet management system, which will handle the dispatch of vehicles to customers.

ComfortDelGro said its cabbies will potentially earn more as they can receive ride requests through the Uber driver app. Uber drivers can likewise get bookings from ComfortDelGro’s customers.

The stake ranks as ComfortDelGro’s single largest deal to date, it said, topping the $203.7 million spent earlier this year on buying the remaining 49 percent stake in its Australian venture, ComfortDelGro Cabcharge.

“Uber will benefit from our fleet maintenance and management capabilities while we will benefit from Uber’s world-class technology. At the same time, consumers will have even more choice with either taxis or private-hire vehicles, shorter waiting times and greater reliability,” Mr Yang said.

Singapore Management University Associate Professor Terence Fan, a transport expert, said ComfortDelGro’s acquisition of a majority stake is a “shrewd move”, as it will have greater control in how Uber will grow in Singapore.

This can help it stem the loss of revenue from its taxi rentals, which have faced stiff competition from the private-hire car sector, Prof Fan said.

Assistant Professor Yang Nan of the National University of Singapore Business School’s strategy and policy department said the tie-up will help ComfortDelGro and Uber compete against Grab, which had teamed up with the other five taxi companies.

In the past months, Grab has been aggressively wooing ComfortDelGro’s cabbies to join the company, by dangling guaranteed fare earnings and rental rebates.

Mr Li Jianggan, founder of Singapore-based Momentum Works, a tech investment company, said the implementation of a licensing regime in July for the private-hire car industry meant new drivers are harder to come by. By adding ComfortDelGro’s taxis, Uber increases its supply on the road.

Ms Ruby Chan, 43, a Comfort relief driver, said being able to take Uber bookings can help increase business. “But we do not know yet how much levy Uber will take from such jobs or whether the fares will be lower,” Ms Chan added.

ComfortDelGro’s share price closed at $1.94 on Thursday and fell three cents to $1.91 yesterday, before the company’s announcement.

The stock has lost around 11 percent since ComfortDelGro’s announcement in August that it was in talks with Uber. Bloomberg said the decline was due to investors losing patience over the lack of details.