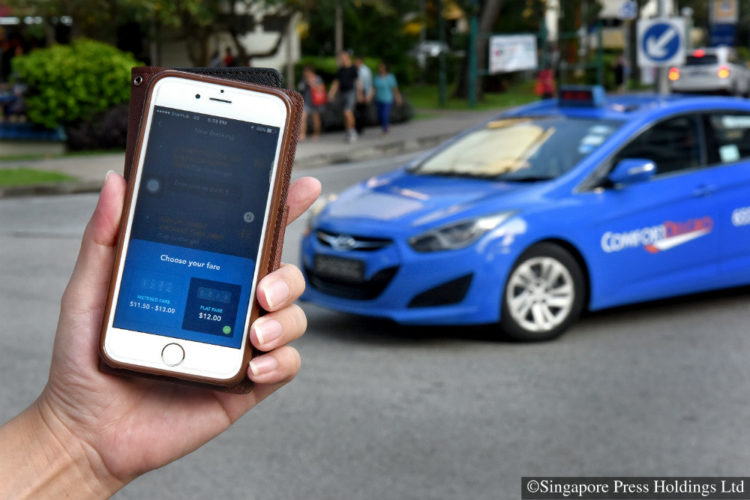 A picture of someone using the ComfortDelgro app to book a taxi outside Singapore Press Holdings (SPH) News Centre.

ComfortDelGro’s new flat fare option has won largely positive reviews from commuters for its simplified charges, while cabbies from the biggest taxi operator are hoping to win over more customers with it.

ComfortDelGro, which owns close to 16,500 cabs, yesterday joined ride-hailing apps Uber and Grab in offering commuters the convenience of a single, upfront fee for bookings made through its mobile app.

The new offering comes less than a fortnight after five other cab operators – SMRT, Premier, Prime, Trans-Cab and HDT Singapore Taxi – launched a dynamic pricing system for some 10,600 of their taxis under Grab’s JustGrab function.

ComfortDelGro said it has received an “encouraging” response to its flat fare system, which does not have a surge variable but factors in the distance travelled, and is computed based on existing surcharges.

This means its fares do not surge during periods of high demand, like those of Uber’s and Grab’s.

Its group corporate communications officer Tammy Tan revealed that about 2,000 bookings were made yesterday morning with the flat fare option, and the firm expects the volume to grow further.

“Many have yet to update their app and we expect more to (do so) in the next few days,” Ms Tan said.

With the update, app users will be shown two sets of fares when they enter their pick-up and drop-off points: a flat fare and a metered fare given in a range.

Opting for the former means they will not have to pay additional surcharge levies, unless they change destination or make unplanned stops along the way. Electronic road pricing tolls are applicable.

This simplification has won over commuters like Ms Betty Bai, 32, a senior public relations consultant.

She said the flat fares offer “peace of mind”, adding: “I wouldn’t worry if the taxi driver takes a longer route or I’m stuck in a traffic jam.”

Her trip from Rendezvous Hotel to AXA Tower in a Mercedes cab yesterday cost her $10.50, a more “attractive” price compared to the $12 to $13 she would normally pay.

However, another commuter, Ms S. Pang, 32, an events manager, said she was not sure the flat fare was always the best choice, after she booked a taxi from Park Royal Hotel to Ion Orchard.

Checks by The Straits Times found that flat fares could be cheaper than their metered equivalents, but not always.

Cabby P. Gunasagaran, 52, said: “I think flat fares can win over those… who worry about the meter fares ‘jumping’ in a traffic jam. There are also many surcharges, which commuters find confusing.”

However, cabby Chris Erh, 59, said some cabbies may find it a “hassle” to remember keying in the ERP charges, which are automatically computed into the fare in a normal metered ride.