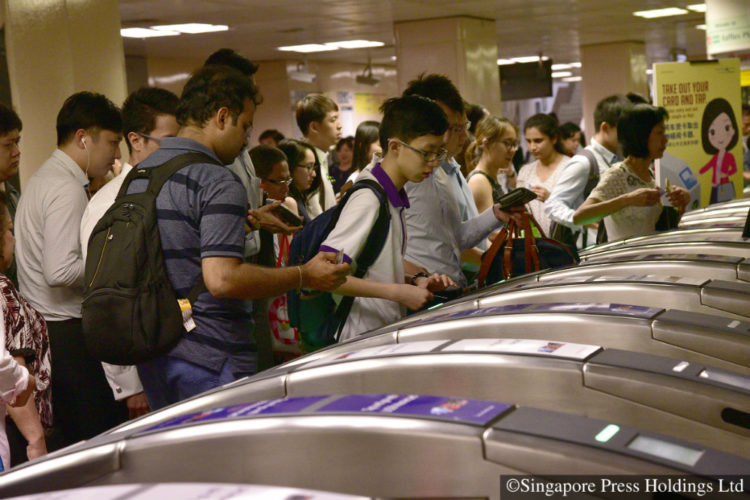 Commuters passing through the gantry gates at Raffles Place MRT station during the evening peak hours on 20 March 2017.

Commuters can pay up to 50 cents less in transport fares if they enter any MRT or LRT station before 7.45am on weekdays.

This reduction will be implemented across the 157 stations from Dec 29.

The announcement was made as part of the Public Transport Council’s (PTC) annual transport fare review where it added that all other transport fares for the coming year will not be adjusted.

The discounted fares before the morning peak period will amount to a fare adjustment quantum of -2.2 percent. The balance -3.2 percent quantum, which was allowable under this year’s fare formula, will be rolled over to the 2018 Fare Review Exercise.

The lower pre-peak fares will translate to a combined reduction of about $40.1 million a year in fare revenue for public transport operators.

“Spreading out travel demand in this way will also make more efficient use of our public transport system, as capacity during off-peak periods will be better utilised,” said PTC chairman Richard Magnus.

Commuters currently get free rides if they tap out of 18 MRT stations within the city centre before 7.45am.

This has resulted in a a sustained 7 percent shift of rail trips out of the morning peak hours, since it was introduced in June 2013. The peak period is between 7.45am and 9am.

The new off-peak discount will apply to all stations and when a commuter taps in before 7.45am. The discount will be 50 cents or the fare for the rail leg of their trip – whichever is lower.

Previously, free travel was only available if commuters tapped out before 7.45am at those 18 stations.

This new initiative was a result of the PTC reviewing the free pre-peak travel at the 18 stations and the off-peak pass, which allows unlimited travel outside peak periods of 6.30am to 9am and 5pm to 7.30pm on bus and train networks.

These two trials will end in December this year.

Under the new initiative, a commuter who taps into Beauty World station before 7.45am to travel to Tan Kah Kee station, will see his fares reduced from $0.87 to $0.37.

A student with concession fares, who also travels between the same stations at the same time and pays 42 cents, will pay nothing for his ride from Dec 29.