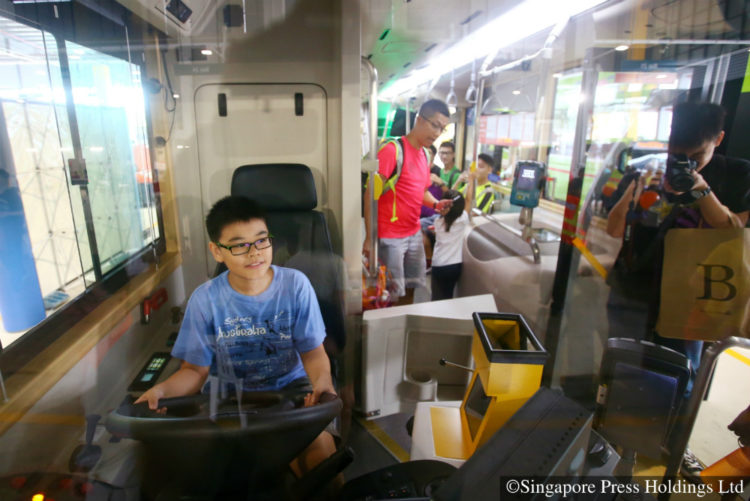 Jeroy Seng, 12, in the driver’s seat of the MAN A95 three-door SBS Transit bus at the Seletar bus depot carnival. SBS Transit will expand its bus service network in the Ang Mo Kio and Yishun areas in two months’ time.

A new bus depot in Seletar was officially opened on 27 January, as SBS Transit expands its bus service network in the Ang Mo Kio and Yishun areas in two months’ time.

On March 18 and 25, SBS will take over 12 bus routes from SMRT, as part of a package of 26 bus services it clinched the rights to run through a tender awarded last year.

SBS is the incumbent operator for the other 14 bus services under the Seletar bus package.

It is the third set of public bus services put up for bidding under the bus contracting model, in which the Government pays a fee to winning operators to run bus services.

Transport Minister Khaw Boon Wan opened the 96,000 sq m depot in Yio Chu Kang Crescent, which can house close to 530 buses, yesterday morning. He toured the facility’s amenities, which include a gym, a rest area with deck chairs and an air-conditioned canteen with cashless payment options.

SBS Transit chief executive Gan Juay Kiat said in an interview that 925 staff, including 777 bus captains, will run the Seletar bus package. Mr Gan said SBS had to recruit 150 more drivers for the bus package, which demands higher standards of bus frequency and punctuality under the contract.

“The commuters can expect better headway, and higher reliability in our (bus) services. Because of bus contracting, the standards have gone up,” he told The Sunday Times.

Under the bus contracting model, operators are subject to strict reliability standards, with performance incentives or financial penalties given depending on whether standards are met.

More than 120 bus captains who are currently driving for SMRT will join SBS in the transition in March.

Mr Gan said that to boost safety, all 390 buses under the Seletar bus package will be equipped with crash avoidance devices and a telematics system, to monitor bus captains’ driving habits, such as acceleration, braking and cornering.

The Seletar bus depot is the third depot built by the Land Transport Authority, which owns all bus assets and leases them to operators under the contracting model. The other two depots in Bulim and Loyang are operated by Tower Transit and Go-Ahead respectively, which won the first two bus contracts.

SBS chief bus captain Joseph Yap, 63, gave the thumbs up to the amenities at the Seletar depot, such as mobile device charging stations, free Wi-Fi and massage chairs.

“Because of our shifts, we may have long breaks. With the amenities, we won’t feel so bored,” Mr Yap said in Mandarin.

Yesterday (27 Jan), the public was given a chance to visit the new depot, as part of a carnival held by SBS.