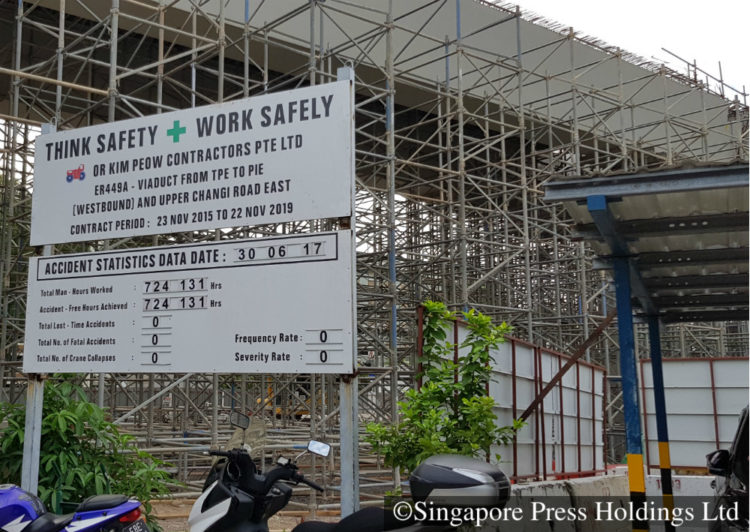 The Straits Times understands the samples were required by the Building and Construction Authority (BCA), which is looking into why the corbels – angular structures built to support heavy loads – on the raised highway in Changi gave way at about 3.30am last Friday.

The analysis will determine, among other things, the quality of the mixture, and that it met design specifications. A lower quality concrete could be weaker than designed, and could indicate that contractors or suppliers cut corners.

Workers could be seen on Tuesday afternoon using drilling equipment at both ends of the viaduct structure where the failed corbels are located.

The BCA was unavailable for comment, while employees of Or Kim Peow – the contractor that teamed up with CPG, the corporatised entity of the former Public Works Department to secure the viaduct project with the lowest bid of $94.6 million – declined to talk to the press.

Asked why it awarded the contract to a contractor that was, at the time, being investigated for an earlier work site fatality case, the Land Transport Authority reiterated that its tender process took into account “many quality aspects”, including “track record”.

In Friday’s collapse, which killed one worker and injured 10 others – of whom two are critically injured, preliminary findings pointed to failed corbels as the cause.

But experts on Tuesday (July 18) said it was too early to say why the corbels gave way.

Retired civil engineer Go Yang San, who was involved in several rail and road infrastructural projects here in the past three decades, said theories about poor design, weak processes and sub-standard materials should not focus only on the corbels.

“It’s unfair to pinpoint any one party,” he said, adding that secondary supports such as scaffolding could have shifted out of place because of “ground movements”.

“If the scaffolding is not supported carefully, a ground movement could transfer the load to the corbels. This could have tipped the balance,” he said, referring to the designed strength of the corbels.

Mr Go pointed to wet concrete being poured – that can also exert a “moving load” on the structure. “Anything that moves can tip the balance, too,” he added.

West-facing corbels supporting both ends of the viaduct section gave way, sending the uncompleted 40m section of the elevated road crashing down. Apparently, workers had poured in 50 cubic m of concrete – weighing about 125 tonnes. There was about 10 more cubic m left to go before the accident happened.

Mr Go said while the contractors and checkers are supposed to ascertain the ground conditions before erecting the scaffoldings, Mr Go said “we shouldn’t pre-judge” before investigations are completed.

Asked why Or Kim Peow clinched the contract despite being investigated for another workplace fatality case just weeks earlier, he said: “Only the LTA evaluation team can answer that. But the company has been around for a long time.”

In September 2015, a 24-year-old worker died after he fell from a 6m-high platform below the Yio Chu Kang flyover. Three others were seriously injured. The four were working at an Or Kim Peow work site.

In November that year, the local firm announced that it had secured the contract to build the viaduct in Changi.