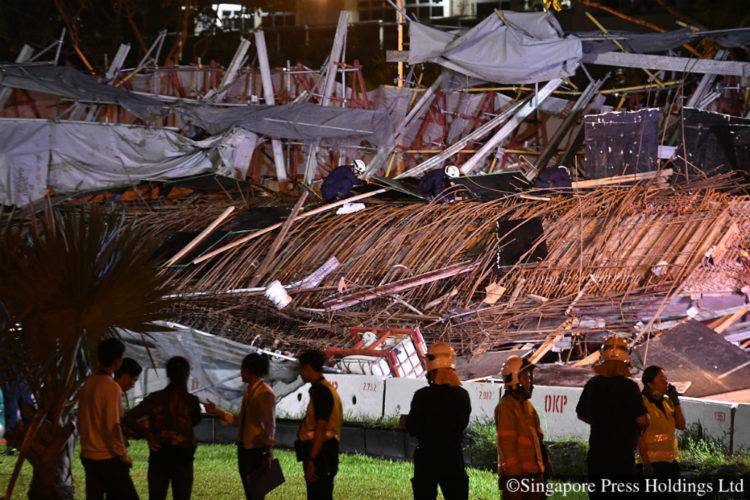 The construction firm building the structure that collapsed on Friday morning (July 14) has asked for a halt in the trading of its shares.

The call from OKP, the holding company for Or Kim Peow Contractors, came at around 10.15am, with its shares down 8 percent to 39.5 cents.

Shares of the mainboard-listed OKP Holdings slid when trading opened on Friday. At 9.20am, they were down 7 percent to 40 cents.

One worker has died and 10 others have been injured in the work site collapse.

The structure that collapsed on Friday is believed to be at an early stage of construction, with the metal reinforcement bars still being placed. No concrete tear marks could be seen at the adjacent structures, which are still standing.

According to the Land Transport Authority, preliminary investigations indicate that the corbels supporting the pre-cast beams had given way. A corbel is a structural piece of stone or metal jutting from a wall to carry a weight.

The firm had been found guilty just three days earlier in connection with another accident at a construction site.

In that case, too, one worker had died, while three others were injured.

Before that, the firm Or Kim Peow (OKP) had received 25 demerit points from the Ministry of Manpower (MOM). It had been blacklisted from January to April.

In the incident which happened in 2015, OKP was found guilty of breaches of the Workplace Safety and Health Act. The firm and its safety coordinator and site supervisor Victor Tan Kok Peng were fined $250,000 and $12,000 respectively for a workplace accident on Sept 22, 2015.

Four workers fell 6.4m to the ground when the section of the working platform they were standing on under Yio Chu Kang Flyover dislodged. One worker died and the other three suffered injuries.

According to the Manpower Ministry, the firm was engaged to expand the CTE/TPE/SLE interchange, which included structural, piping and finishing works for the flyover.

There was also no warning sign or label displayed stating the maximum permissible load of the working platform at its access point.