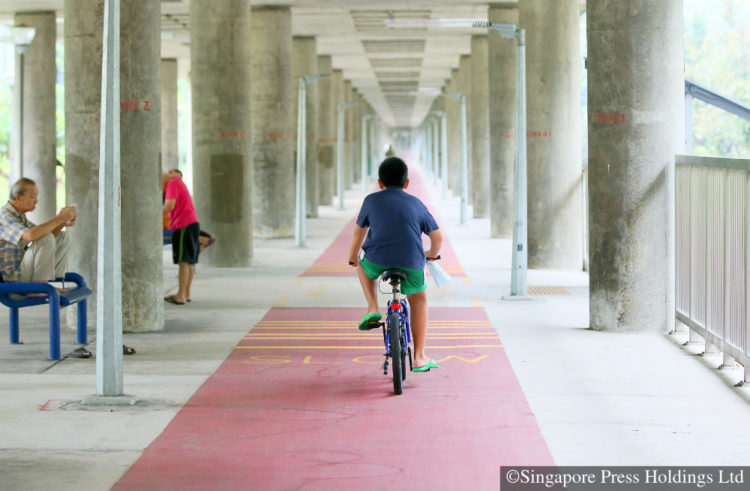 Ang Mo Kio was identified in 2014 as a test bed for new cycling infrastructure. A 4km-long red cycling path that loops around Ang Mo Kio Avenues 1, 3 and 8 was built last year.

Build it and they will come, goes the old adage – and that is exactly what happened in Ang Mo Kio when the Land Transport Authority (LTA) built a 4km cycling path one year ago.

After it was launched, the LTA found that there was an increase of more than 30 percent in cycling activity at certain stretches where the circuit was laid, such as under an MRT viaduct.

This is significant because LTA surveys showed that about 40 percent of cyclists have adopted cycling as part of their first-and-last mile journey to the MRT station.

Ang Mo Kio was identified in 2014 as a test bed for new cycling infrastructure. It completed its first phase of transformation into a model walking and cycling town in July last year.

The 4km-long red cycling path loops around Ang Mo Kio Avenues 1, 3 and 8. It was built with safety features such as road markings to alert motorists of pedestrians and cyclists at crossings.

To gauge the effectiveness of these measures, the LTA conducted manual counts along the path and did face-to-face interviews with 800 residents living nearby.

More than a quarter of the residents surveyed were cyclists, while the others were pedestrians.

About 88 percent of cyclists said they feel safer with the new infrastructure, compared with 65 percent before.

Meanwhile, 56 percent of pedestrians said they also feel safer, compared with 33 percent before the implementation of the cycling path.

Pedestrians told The Straits Times that this is because there is better segregation of cyclists and pedestrians. Pedestrian priority zones behind bus stops, which also separate the two groups, were also welcomed.

Mr Pragash Kulasagar, 51, the team leader of an active mobility patrol team in Teck Ghee, said: “When the cyclists enter these zones, they encounter (rumble) strips, which make them slow down.”

While residents welcomed the new cycling infrastructure, some raised concerns about reckless users taking advantage of the smoother ride.

Secondary 4 student Tasha Ng, 16, took issue with e-scooter users who speed down the cycling path, especially at night. “How fast do they go? You can hear them coming but by the time you see them, they are whizzing by you,” she said.

Mr Kulasagar said there have been no reported accidents on the cycling path. He supervises about 100 volunteers from 10 residents’ committees who patrol the town to educate residents on safe riding.

But he agreed that the path can become crowded with two-way traffic during peak hours, and hopes more signs can be put up to remind users to be cautious.

Ms V.L. Koo, 29, a project manager, said it was common to see joggers and pedestrians using the bike circuit, especially along Avenue 8.

“It’s a habit. Many residents used it as a walking path before. But I don’t think it’s a problem – they will move out of the way when there are cyclists,” she said.

The LTA is now finalising design plans for the second phase of Ang Mo Kio’s transformation, which will add 16km to the biking route.

A tender will be called in the first half of next year, the LTA added, with construction to start in the second half and an expected completion date of 2020.

Mr Ong Eu-Gene, a deputy director at LTA’s Active Mobility Unit, said that building on the positive feedback on the red cycling path, the LTA will extend the design to future cycling towns, starting with Bedok.

Bedok is set to become the ninth cycling town next year, joining the likes of Jurong Lake District, Punggol and Pasir Ris.

The Government’s plan is to construct cycling paths in all 26 Housing Board towns by 2030, contributing to an islandwide network of 700km. The current network, which includes the park connector network, is now more than 400km.