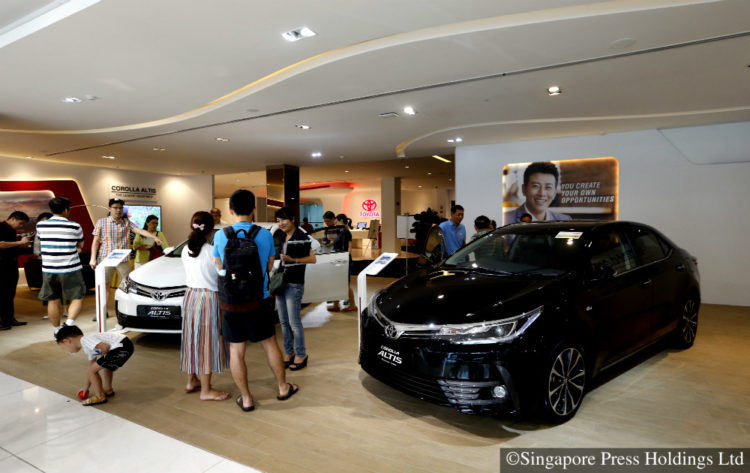 Customers at Borneo Motors’ Toyota showroom on Sep 10, 2017. The agent said most buyers were keen on Category A cars like the Corolla Altis.

Car dealers told The Straits Times on Monday (Sep 11) that foot traffic in their showrooms had increased anywhere from 30 percent to more than 100 percent.

Toyota agent Borneo Motors, which saw a jump of about 50 percent in foot traffic, said activity began picking up since last Thursday, a day after the latest tender.

Its marketing director Samuel Yong said most buyers were keen on Category A cars like the Toyota Corolla Altis, the category with the steepest drop in COE price. He said: “As long as COE prices remain at this level interest will be high.”

In the three showrooms visited by The Straits Times, there was a steady stream of people, with smaller cars drawing the most interest.

Industry players attributed the 16.1 percent price plunge to factors like private-hire firms Grab and Uber stopping their fleet expansion, and the new Euro 6 emission standard that came into effect this month. This means car dealers have no more saleable backlog of cars that do not meet this standard.

Kah Motor sales manager Gary Quek said there was about 30 percent to 40 percent more visitors to Kah Motor’s Honda showroom this weekend compared with the previous week. He said: “People are feeling that the COE prices will increase in the next round, so many are putting their money down before prices go up.”

Over at Nissan agent Tan Chong Motor, sales consultant Christopher Kuan said the situation was “crazy”, with the number of customers sales staff had to attend to more than doubling since the last COE tender.

Indeed, many of those at the showrooms yesterday said they were prompted to go car shopping by the news of the lower COE prices.

Business development executive Koh Seng Chye, 57, who was looking at the Nissan Qashqai, said he was at the showroom because one of the sales staff told him there was a good deal on cars. And he added that while there were many factors he had to consider before selling his current Volkswagen Jetta, the low COE price was definitely an incentive to get a new vehicle.

Another customer, Mr Mohamed Ali, said he had been considering a new car for some time but decided to buy only after the prices dropped. “We’ve been waiting for the COE prices to drop a bit, so now seems like the perfect time to come and buy a car,” said the 51-year-old software consultant, who was at Honda distributor Kah Motor yesterday with his family.

Related story: Some popular car models will exit Singapore when Euro 6 emission standard kicks in
Related story: How will my car’s road tax and insurance be affected if I renew its COE?