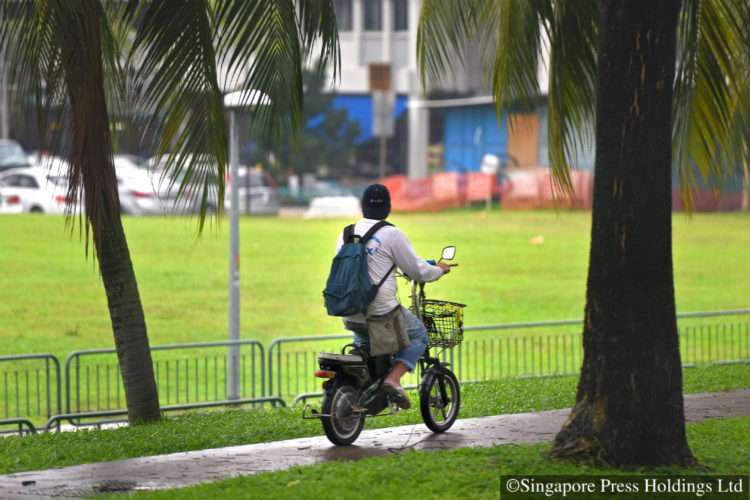 Since 2004, there have been 30,000 electric bicycles that carry the LTA seal and are approved for use on public roads. About half are estimated to be still in use now.

Owners of power-assisted bicycles, or bicycles equipped with electric motors known as e-bikes, will have to ensure that their bicycles have been approved by the Land Transport Authority (LTA) and get them registered by Jan 31.

After this date, owners of e-bikes without a valid registration plate may be fined, jailed or both.

Registration channels open from Aug 14, and those applying must be at least 16 years old.

In January this year, the Government announced that all e-bikes would need to be registered to an owner and have registration plates in an effort to clamp down on those who illegally modify their bicycles.

The move also aims to make it easier for the authorities to nab reckless riders and make pathways and roads safer for other users, in particular, pedestrians.

Accidents resulting in injuries involving e-bikes went up from 39 in 2015 to 54 last year, though the number of fatal accidents involving the two-wheelers dropped from five in 2015 to three last year.

Since 2004, there have been 30,000 electric bicycles that carry the LTA seal and are approved for use on public roads. LTA estimates that about half are still in use now.

Potong Pasir MP Sitoh Yih Pin, chairman of the Government Parliamentary Committee for Transport, said: “I am extremely pleased to know that LTA has decided to mandate the registration of power- assisted bicycles. I had asked for more regulation for personal mobility devices during the Active Mobility Bill debate. This is a step in the right direction.”

He added that in addition to registration, he also hopes that LTA will consider requiring third-party insurance for e-bike users.

“While we cannot eradicate accidents completely, we should try to ensure that unwitting victims of accidents involving personal mobility devices have recourse to an adequate compensation scheme for personal injury suffered,” said Mr Sitoh.

“Because of the rules, it is harder for me to sell the bikes,” said Mr Ong Beng Teng, 64, the owner of e-bike shop Esibike. “However, registration can prevent people from stealing bikes or from modifying the motors. I have seen modified bikes that can go up to 70km/h like a motorcycle.”

He noted that e-scooters are rising in popularity because they do not face such strict regulations.

Mr Tay added that there needs to be more education and awareness raised on how to properly use e-bikes.

“There should be road signs about to remind people, rather than just fines and penalties,” he said.

Ms Chong Say Mooi, a 63-year-old cleaner who rides her e-bike to work, said: “Registration is good as it deters bad behaviour, but ultimately, safety is a personal thing.”

To register, e-bike owners may visit www.onemotoring.com.sg or go to any post office.

The registration fee will be waived for LTA-approved bikes which are registered by Nov 30.