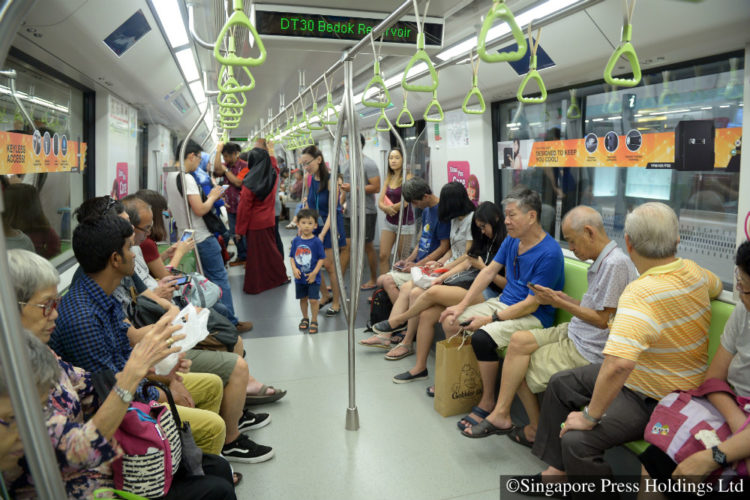 Giving subsidies to commuters travelling throughout the MRT network during the morning off-peak period is likely to be an effective move to ease peak-hour crowds, said experts.

The Public Transport Council announced yesterday that commuters who tap in before 7.45am at any train station on weekdays from Dec 29 will receive a discount of up to 50 cents on their fares.

Transport experts say this is an improvement on the existing scheme, which gives free rides to those who tap out before 7.45am at 18 MRT stations in the city area.

Associate Professor Michael Li, a transport economist at Nanyang Technological University, said: “This is the right move. By giving the off-peak incentive, it should encourage people to move towards that time bracket.

“Commuters definitely would respond. If 5 percent of commuters make the shift, I think it would be a success.”

He added, however, that the Government would need to do a trial and error of the discount quantum to reach a price point that is most attractive for commuters to distribute the load more evenly.

He added that it had a better chance of getting people to travel earlier than the existing free pre-peak period initiative.

“Previously, people had to tap out before 7.45am to get free travel, so it benefits those who already travel very early anyway. Now, by shifting 7.45am to the time people tap in, it is more targeted at those who travel around 8am to 9am, which is when there is a spike in commuters.”

He added: “It is now also nationwide rather than just the city area, including congested stations such as Jurong East. There are many travelling to work in commercial areas outside the city, so this will impact them too.”

Commuters interviewed had mixed views on whether such a move would make them change their travel patterns.

Ms Nadia Rosli, 24, a project manager at a food manufacturing company, said she would not wake up 30 minutes earlier for a 50-cent reduction. “Maybe I would do it once a week but definitely not every day,” she said.

“I would also rather have fast, efficient trains that don’t break down as much even if it meant paying slightly higher fares,” she added.

Mr Eugene Tay, 42, an executive officer, said: “I tap in at 6.45am, so I will get the discount but it’s not a big deal. I would prefer that the trains are more frequent and on time.”

Ms Deanna Lim, 23, a lifestyle blog intern, said she would consider travelling earlier for the discount.

“If I get to work an hour or so earlier, I can go to the gym and have breakfast before work. I wake up early anyway, so it isn’t such an issue for me,” she said.