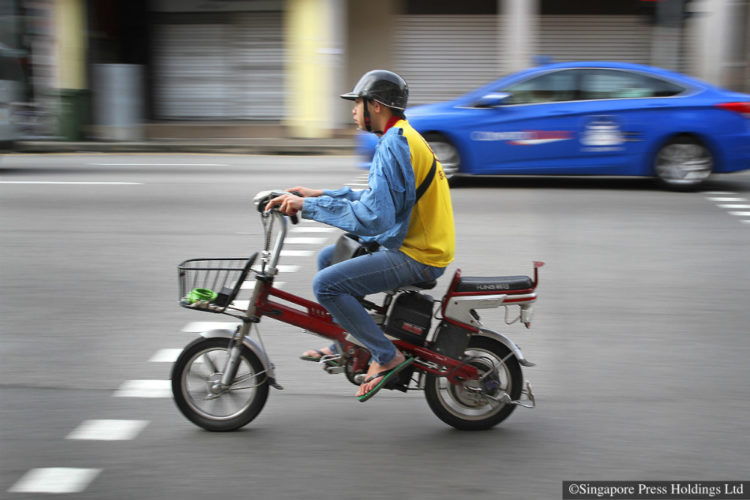 An e-biker riding fast on the road.

Two power-assisted bicycles (PAB) or e-bikes were impounded by the Land Transport Authority on Tuesday (Jan 30) night, after an operation by enforcement officers in the vicinity of Bedok Town Centre.

The two bicycles, which had been illegally modified by adding a throttle, were also found without a valid LTA seal, said the authority in a Facebook post on Wednesday.

The respective riders are assisting LTA with investigations.

From Thursday, all PABs must be registered and affixed with a valid LTA seal.

These include bicycles that are equipped with electric motors that assist in pedalling.

Anyone caught keeping or using an unregistered power-assisted bicycle or one without a valid number plate can be fined up to $2,000 or jailed up to three months, or both, said the authority.

The authority added that it “will continue to step up enforcement efforts”.

Riders can register their devices online at www.onemotoring.com.sg from Thursday. Registration services at SingPost post offices will cease.

Bicycles with blue seals will not be allowed to register.

In January last year, a new law was approved in Parliament to regulate the use of personal mobility devices (PMD), with Senior Minister of State for Transport Josephine Teo saying that PABs in particular were targeted as they “were prone to illegal modification to achieve high speeds on roads”.

So far, more than 13,000 PABs have been registered, said the LTA on Wednesday.