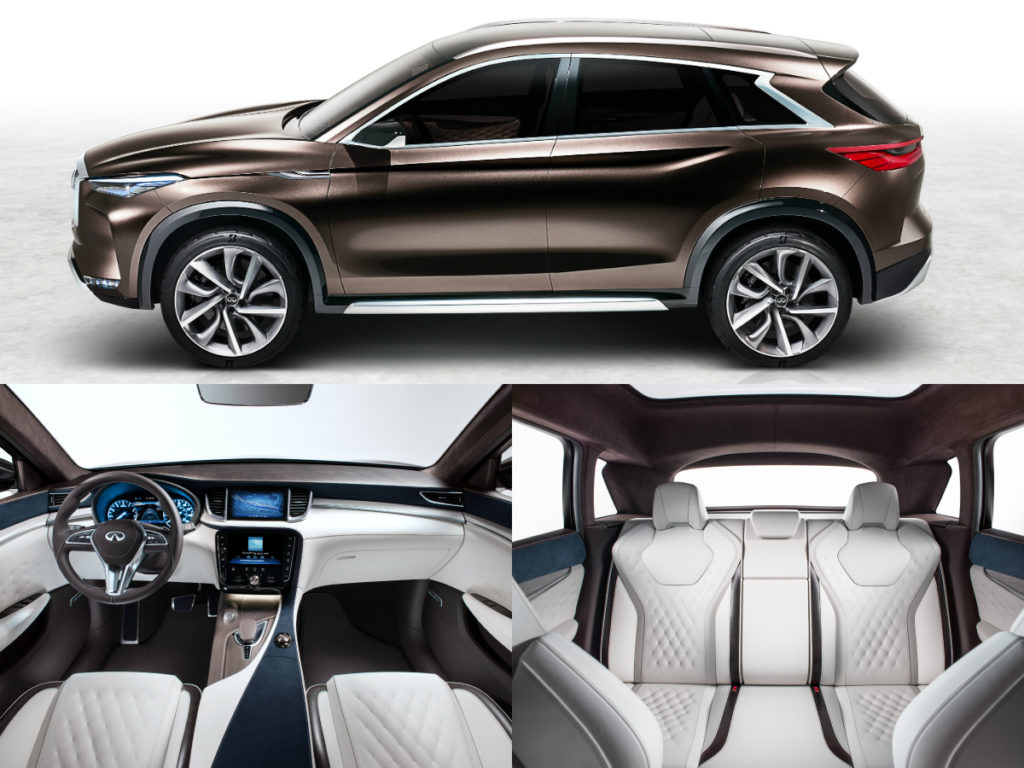 With the QX50 Concept, Nissan’s upmarket division seeks to explore a more emotional execution of crossover design, bringing a degree of elegance and artistry to a segment typified by an uninspiring, clinical aesthetic. Marrying human artistry with utility, the QX50 Concept fulfills the expectation of practicality with a spacious cabin and cargo area.

Furthermore, with a design adapted for the greatest possible packaging efficiency, the QX50 Concept previews how Infiniti could adapt its future vehicle designs to accommodate a compact powertrain, such as the company’s VC-Turbo engine.

The QX50 Concept confidently articulates the automaker’s “Powerful Elegance” design language. A cabin-forward silhouette combines with muscular lines and flowing surfaces to telegraph its purpose as a dynamic yet practical crossover.

The production-ready VC-Turbo 2-litre 4-cylinder engine represents a compelling alternative to diesel powertrains, particularly in the mid-size premium crossover segment. The VC-Turbo 4-pot is able to adapt its compression ratio according to driving conditions, so as to deliver optimal levels of performance and efficiency. It challenges the notion that hybrid technology and diesel are the only powertrains capable of offering high efficiency and torque.

For its application in the QX50 Concept, the human-machine interface (HMI) demonstrates to the driver and passengers how the VC-Turbo is adapting according to driving conditions. The HMI displays the engine’s current status as it intelligently chooses appropriate levels of performance and high efficiency.

With a downsized capacity plus high power and torque, the 2-litre VC-Turbo engine boasts an impressive specific power output which is higher than that of many competing 4-cylinder turbocharged gasoline engines, and close to the performance of some V6 petrol powertrains. In time for the engine’s production debut in 2018, Infiniti’s engineers are targeting a 27 percent improvement in fuel efficiency over V6 petrol engines of similar power output.

Read about the importance of car colour to Infiniti.