Honda HR-V lines up alongside the Peugeot 3008 in this Group Test
Loading posts... 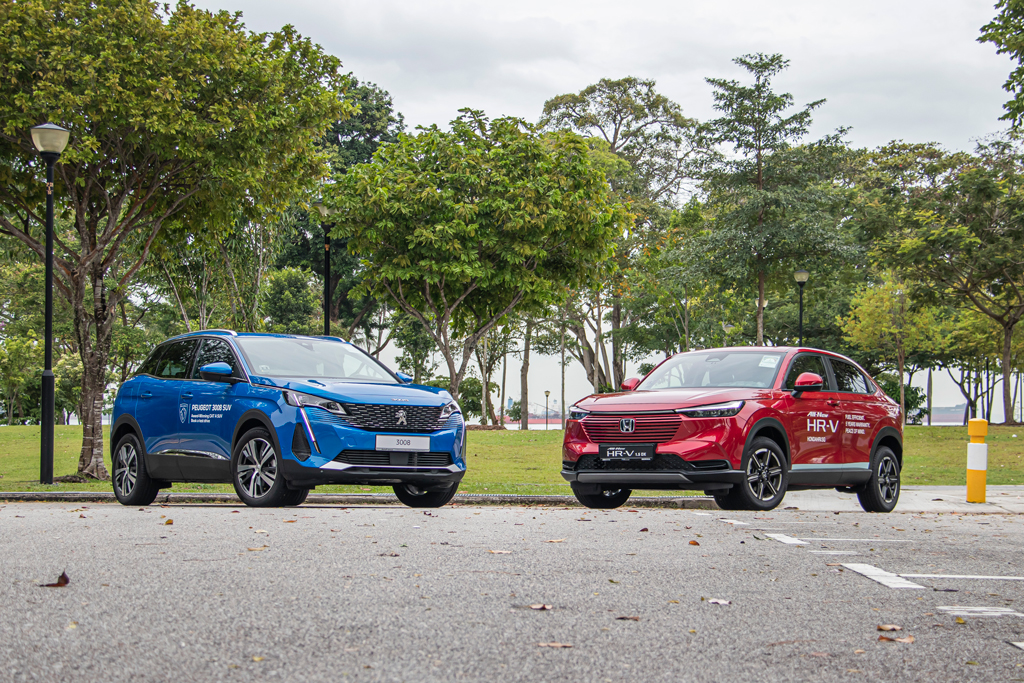 The compact crossover continues to be the model of choice for many drivers, who have grown accustomed to the benefits they offer. Compared to a three-box sedan, said advantages include easier ingress/egress due to the slightly higher hip point, a taller driving position, and more flexible boot space. The more ‘rugged’ character is cited by many, too.

The two contenders in this story are relatively well known in Singapore. The 3008 has been around for several years now, but constant updates have ensured that its design and equipment have remained fresh.

The HR-V, on the other hand, is an all-new model that looks sleeker and sportier than its predecessor. With better amenities this time around, it should prove more convincing to buyers.

The question is, does the HR-V have the chops to edge out the 3008? Or will this “fanged” French model take a bite out of it in this Cat A crossover contest? 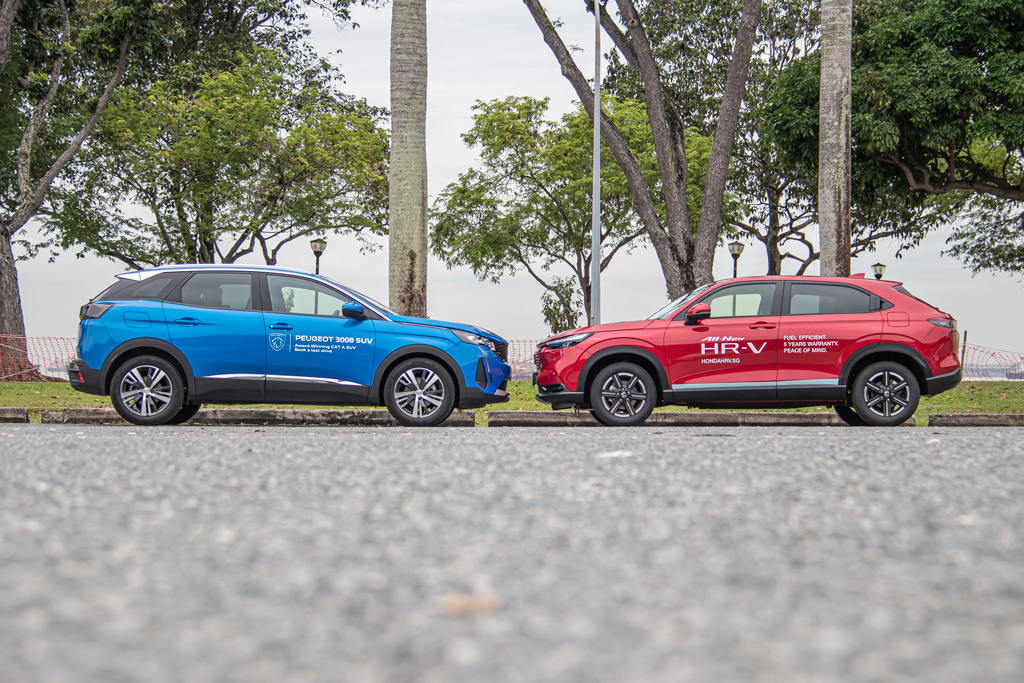 When it comes to styling, it is the fierce-looking 3008 that catches your attention. Following the last facelift, this Gallic model now features a frameless front grille, along with vertical LEDs that resemble fangs.

Complementing these are the claw-inspired tail lamps – another nod to the brand’s lion badge. It’s hard to believe that the 3008 actually debuted six years ago. That’s how good its design is.

The latest HR-V is no wallflower either, especially when compared to the previous one. The 3008 may have a frameless grille, but the HR-V ups the ante with one that looks like it’s essentially integrated with the front bumper. 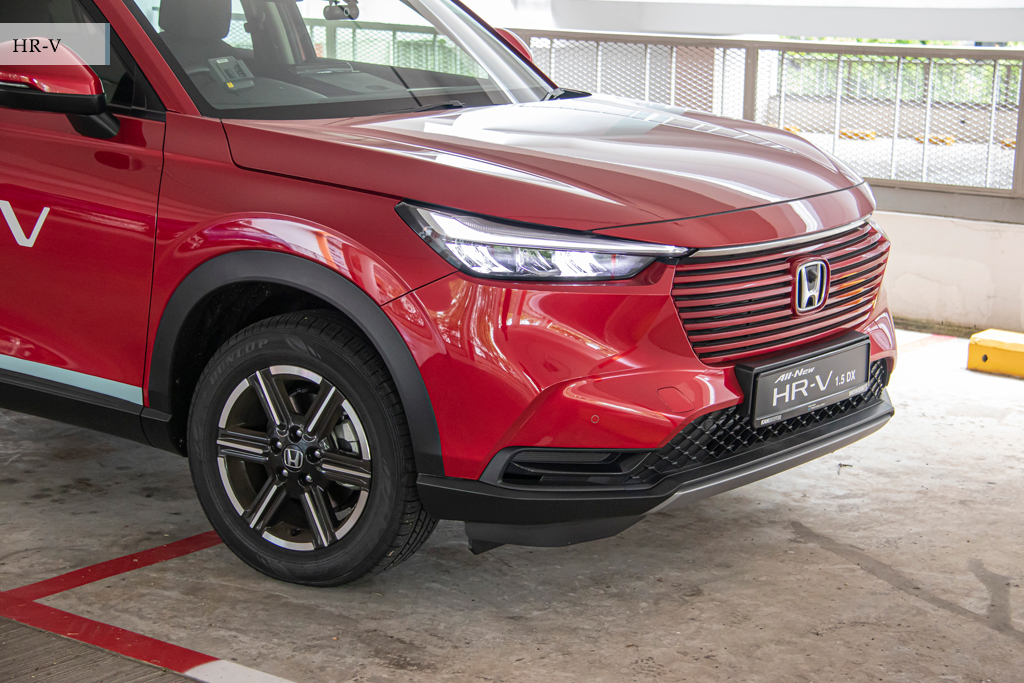 The Honda’s sleek head lights add to the crossover’s futuristic character as well. And in keeping with the minimalist aesthetic, even the rear tail lamps are super slim.

Overall, the new HR-V looks sportier than before, with both the front and rear windscreens set at steeper angles. Even the windows are smaller, giving it a more ‘coupe-like’ profile.

Between the two, the 3008 is the larger car. But as we shall soon see, the HR-V offers flexibility that its rival doesn’t.

The Honda’s exterior looks more futuristic than the Peugeot’s, but the opposite is true when it comes to the interior.

If it’s your first time behind the wheel of a 3008, you’ll be dazzled and perhaps slightly befuddled with its snazzy and sporty cockpit.

The steering wheel is compact and racecar-like, the instrument panel is fully digital and has selectable layouts, and almost every function is parked inside the infotainment system. 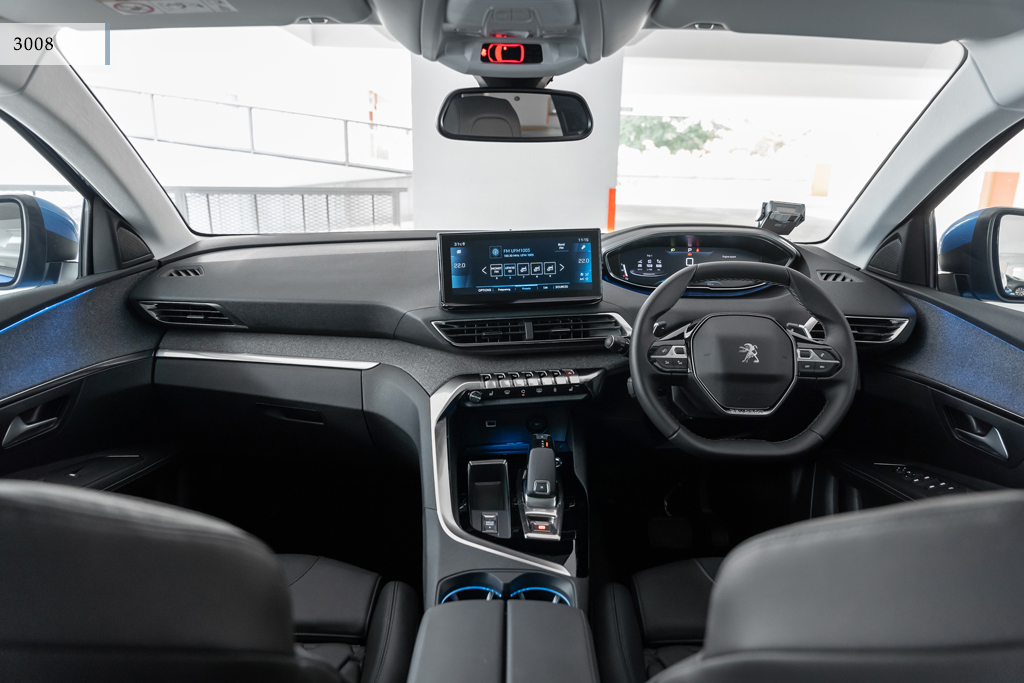 Some physical buttons remain, though. Those rocker switches, for instance, have great tactility and offer direct access to certain features. But the functions you’ll often need to access like the start-stop system and climate control are only found on screen.

The 3008’s overall practicality is higher than the HR-V’s. This is thanks to the generous centre console storage and larger door bins. The HR-V’s storage points, on the other hand, are smaller, and there are no door bins for rear passengers.

That said, while the 3008 impresses with its nifty design, I find the HR-V’s more user-friendly cockpit more appealing.

It may not have a shiny digital instrument cluster, but the analogue gauges work just fine. I also appreciate the physical controls for the air-con – just turn those knobs to set the temperature and air-flow directions. No waiting around for menus to load. 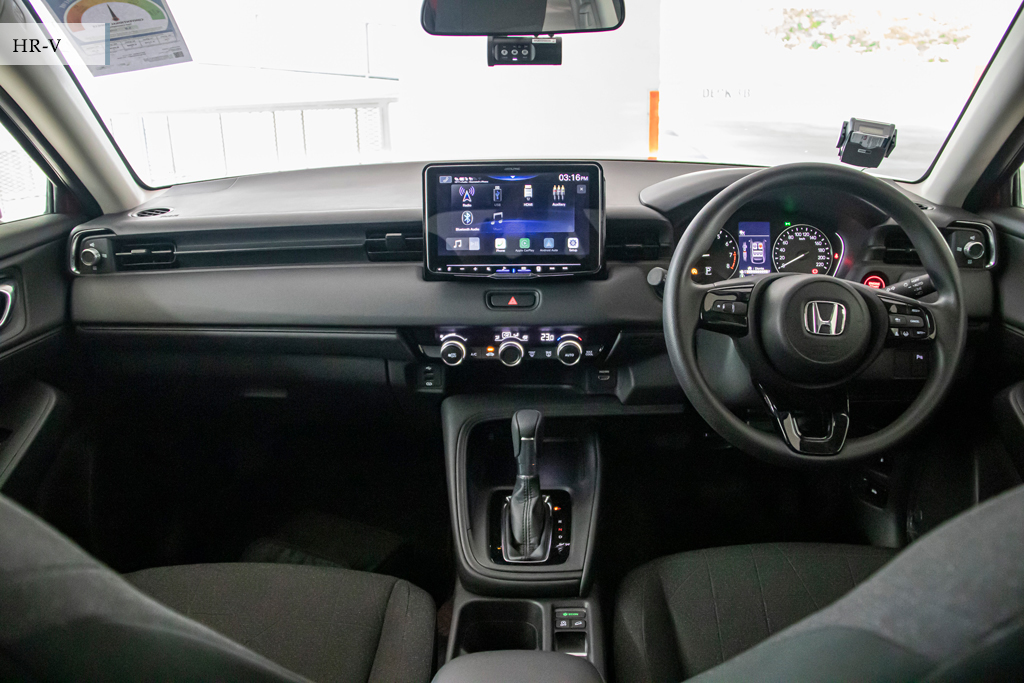 Speaking of air flow, the outer air vents in the HR-V have knobs for you to choose between three settings: focussed, diffused or off. In an age where everything is being digitised, intuitive and direct controls are refreshing.

The 3008 not only has larger storage spaces – as the larger crossover, it also has a bigger boot. Open the powered tailgate, which includes both close and close & lock functions and there are 520 litres available for your belongings.

At 319 litres, the HR-V’s cargo hold is substantially smaller. But loading and unloading items here is arguably easier because of the lower loading height compared to the 3008. So, if you’re relatively petite, you’ll find the HR-V’s boot more convenient than the 3008’s. 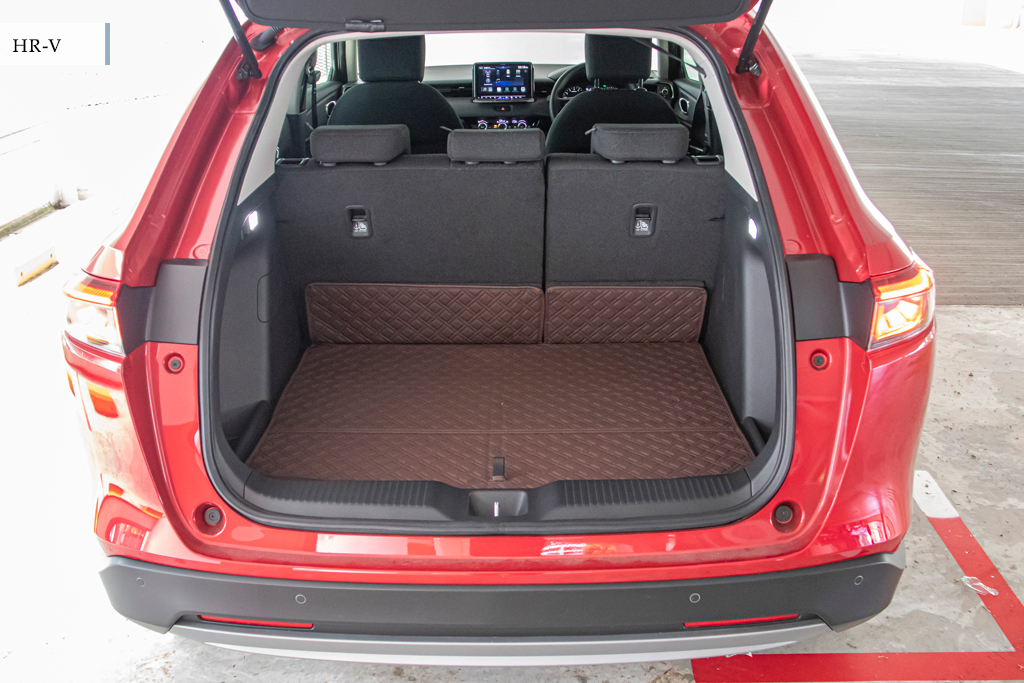 Another HR-V plus point is its unique rear ULTRA seats. First seen on the Jazz, their squabs can be flipped upwards and locked in position in two easy motions, freeing up room to carry taller items such as plants.

So, although the HR-V doesn’t have the 3008’s cargo capacity, it makes up for this by offering better flexibility.

Here, the two crossovers are once again in opposing camps. The HR-V’s power is derived from natural aspiration, while the 3008 is turbocharged.

Powering the HR-V is Honda’s 1.5-litre four-cylinder, which produces 117hp and 142Nm. Paired to a continuously variable transmission, it gets the HR-V from zero to 100km/h in 12.1 seconds. 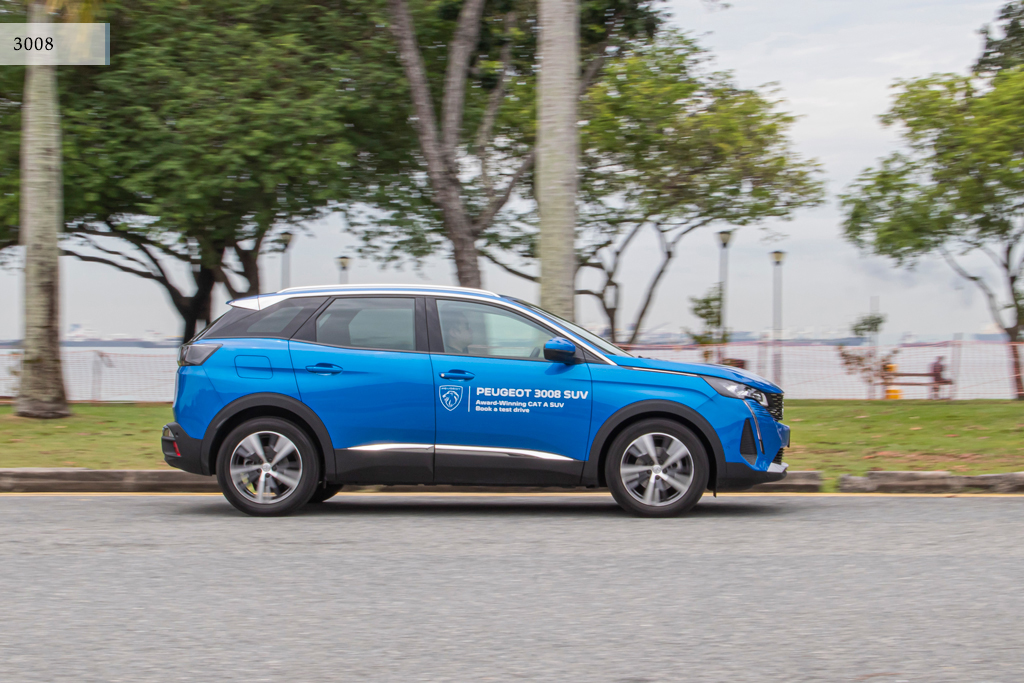 On the other hand, the HR-V is better suited to “regular” drivers who aren’t concerned with performance. It’s perfectly at home being driven gently, and besides, since it comes with adaptive cruise control (the 3008 doesn’t), it’s better to take it easy here.

Interestingly, the HR-V feels more “hatchback-like” than the 3008. Coupled with its smaller size, it also feels nimbler when turning in tight carparks. 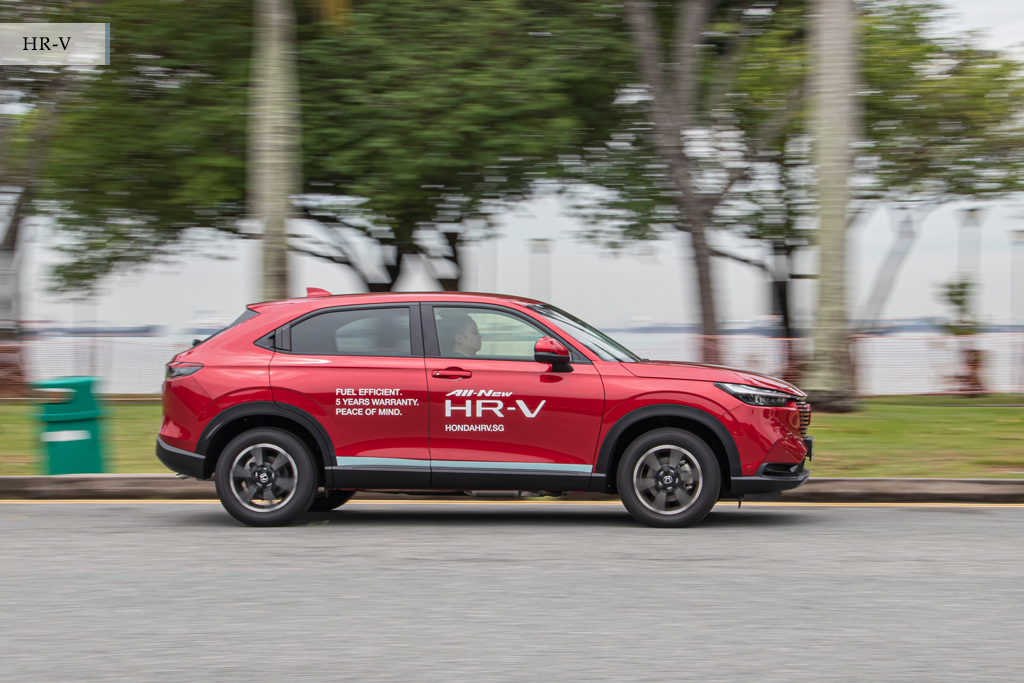 The 3008 has a lot going for it. Attractive aesthetics, a roomier cabin, bigger boot and peppier performance are convincing traits for would-be buyers.

However, the 3008 does have its drawbacks. It requires a steeper learning curve for buyers who are new to the Peugeot brand. And drivers who want more intuitive (and direct) controls won’t like having to navigate numerous menu screens.

Now, the HR-V isn’t perfect either. Its sleek exterior isn’t replicated in the interior, which could’ve been more practical had the storage points been larger. The drivetrain could also have been more refined.

That said, the HR-V holds its own in terms of manoeuvrability, flexibility and most importantly, user-friendliness. When you think about buying a car, you also consider how you’ll live with it daily, which is why the latter point really matters.

These put the HR-V slightly ahead in my books. But if the 3008 has struck a chord with you, I suggest considering the Active variant, which at time of writing, is $19k less expensive than the Allure.