After anchoring Hungary to gold in the 5000m relay at the 2018 Winter Olympics, speed skater Shaolin Sandor Liu set a tough benchmark, negotiating the track at Flevonice Sports and Funpark in 4 minutes and 4 seconds.

To give the icy time trial an extra edge, Shaolin’s girlfriend – Team GB skater Elise Christie – was part of team Jaguar. With Elise in the passenger seat, the XE 300 Sport took full advantage of Jaguar’s advanced all-wheel-drive and sophisticated traction technologies to maintain its composure.

Jaguar Stability Development Leader Sean Haughey lapped the track in 3 minutes and 3 seconds at an average speed of 59km/h.

Staying true to Jaguar’s sports car DNA, the new 300 Sport is equipped with the advanced 300hp 2-litre Ingenium petrol engine, which powers the XE from 0 to 100km/h in 5.7 seconds. With 400Nm of torque, its effortless acceleration around the 3km ice circuit was too much for the Olympic Champion.

“Ice is one of the most demanding surfaces for any vehicle to contend with and this race demonstrated the XE’s all-surface capability and unrivalled handling in adverse conditions,” said Mike Cross, Jaguar Chief Engineer.

“I thought I would have a big advantage over the car on the ice and was pretty happy with my time considering the conditions, but when I saw the XE300 Sport take off from the start line, I had a feeling it would be faster,” said Shaolin Sandor Liu, Hungarian Olympic gold-medallist speed skater. 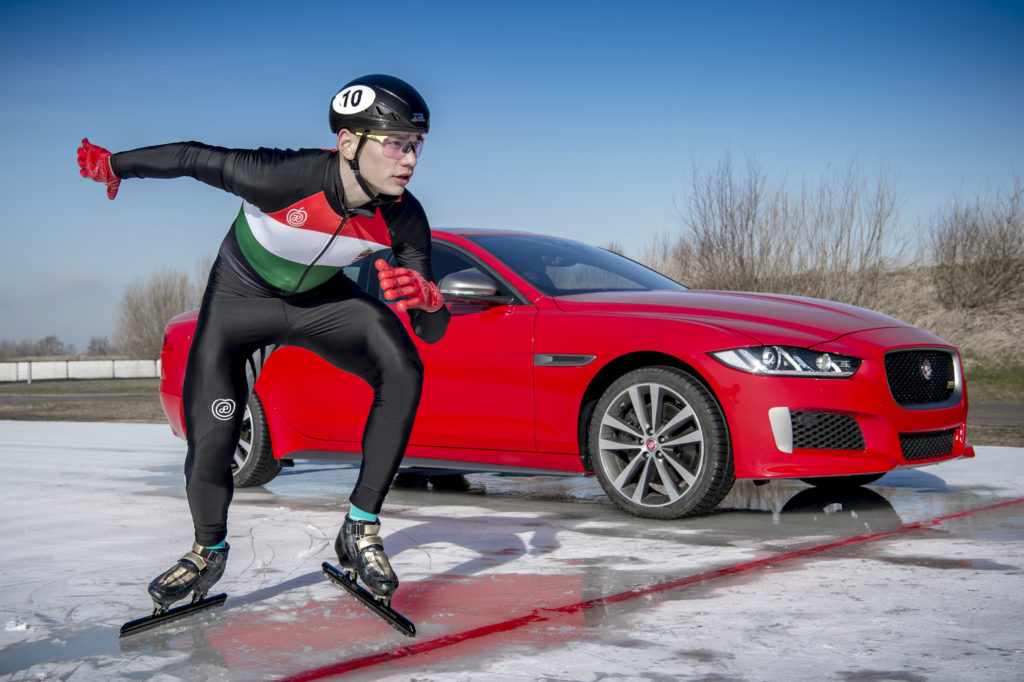 Read about a Seat Leon Cupra’s challenge against a sled pulled by six huskies on a frozen lake.