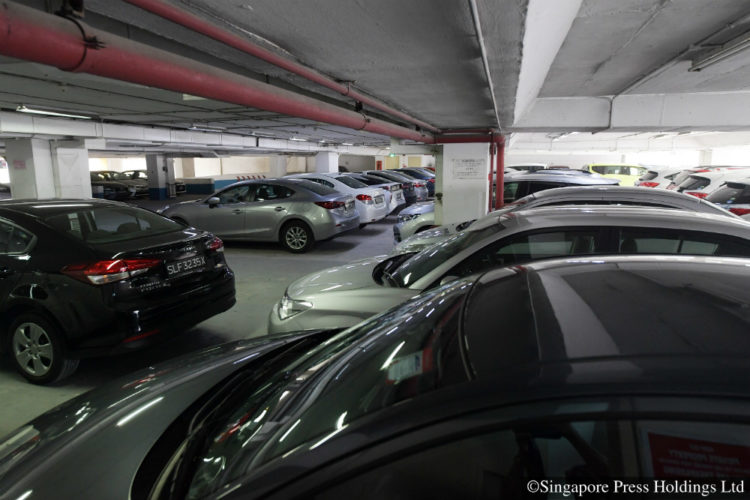 Uber’s Lion City Rentals cars at the Parklane shopping mall carpark in Selegie Road. Its fleet grew from 1412 last February to 8676 in November. In that period, its cars were involved in over 2100 accidents.

Parties involved in accidents with private-hire cars operated by companies such as Uber and Grab tend to have a harder time settling their claims, according to lawyers who act for insurers.

These vehicles are involved in accidents more frequently than other passenger cars, added insurers.

Major insurers that cover these fleets told The Straits Times that private-hire cars, which have more than tripled in number to 51,000 in the last three years, are 30 percent to 50 percent more likely to meet with an accident.

Typically, the number of accidents reported represents 10 percent to 15 percent of the passenger car population. But for private-hire cars, that figure is 20 percent to 25 percent.

General Insurance Association president A.K. Cher said: “These cars are on the road longer than the normal passenger car.

“Many of them are also driven by very young and inexperienced drivers. And they also rely heavily on their mobile devices for navigation, so (the drivers) can be distracted.”

The concern is underscored by data on Uber-owned Lion City Rentals, which is looking for a new insurer.

Its fleet grew from 1412 last February to 8676 in November. In that period, its cars were involved in more than 2100 accidents, incurring close to $10 million in claims.

The figures come from an insurer vying for Lion City’s business.

“It is hard to gauge its accident rate because the fleet has grown so fast,” said an underwriter in that firm. “But assuming an average of 5000 (cars in the fleet), it would translate to a ratio of 40 percent.”

This is similar to the accident rate for taxis and commercial vehicles.

Insurers did not want to be named as they were bidding for Lion City’s contract. A current insurer, Ergo, did not wish to comment either.

Meanwhile, lawyers acting for insurers said they are seeing more cases involving private-hire cars, and these tend to be harder to settle.

All private-hire cars must be insured, but their premiums are higher, reflecting their risk exposure.

Mr Patrick Yeo, a partner at Withers KhattarWong, said his firm had handled an injury claims case in which the private-hire driver was underage and therefore uninsured.

“In a case of an uninsured private-hire car driver, the damage to the cars involved is also (deemed) uninsured,” Mr Yeo said.

He cited another case where a Grab driver was not covered by the insurance policy because he had less than two years’ driving experience – the minimum declared in the policy.

Mr Anthony Chey, a partner at RHTLaw Taylor Wessing, said he had represented a pedestrian who was knocked down by an Uber car at a pedestrian crossing in 2015.

“The case appeared simple enough as liability was clearly against the vehicle driver,” Mr Chey said. But it dragged on for nearly a year because the insurer did not respond, despite reminders.

“Along the way, I learnt that… the case was delayed because of some policy issues regarding the insurance coverage,” he said.

“The claim, which should have been settled within three months, ended up taking 11 months.”

Insurers and lawyers advise motorists involved in a road accident to request the other driver’s identity card details, in case the person is a private-hire driver.