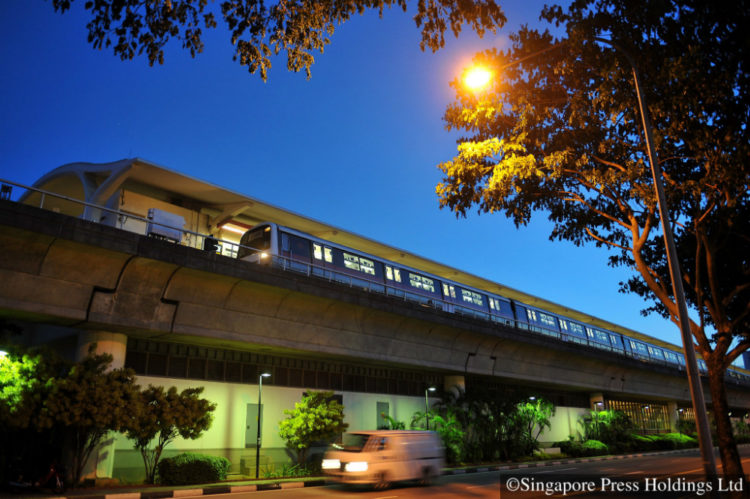 An ambulance was dispatched to Tanah Merah MRT station after the train driver reported that he was feeling unwell on Nov 20, 2017.

Transport operator SMRT has refuted claims that a lightning strike hit a train as it approached Bedok station on Monday (Nov 20), which caused the westbound train to stall.

Instead, trackside equipment was affected by lightning, causing the disruption, SMRT said on Tuesday.

It added that the train driver who was admitted to hospital after the supposed “lightning incident” had also been on medical leave for two days over the weekend.

Following the incident, he was admitted for observation as a precautionary measure after reporting that he felt unwell. The driver was discharged from hospital on Tuesday.

After investigations, “our engineers… confirmed that the train was not hit by lightning. Instead, lightning affected trackside equipment”, said SMRT spokesman Patrick Nathan.

“After the lightning incident, the train was immediately able to recover and move on its own power, moving passengers safely to Bedok station. At Bedok station, passengers alighted and the train was promptly withdrawn from service to allow for a thorough inspection by our engineers,” said Mr Nathan.

It caused a 10-minute delay in trains travelling in both directions between Tanah Merah and Paya Lebar.

A similar incident happened in May last year when lightning struck between Yio Chu Kang and Khatib stations along the North-South Line, crippling a train and causing delays of almost an hour.

Lightning strikes might damage equipment depending on the striking energy of the lightning strike, said engineer Teo Chor Kok, a council member at The Institution of Engineers, Singapore.

But trains can still run smoothly through a direct strike on the train tracks, as there are safety measures in place, such as metal covers that shield the third rail track that powers the train. “Metal conducts electricity, so when lightning hits, the total energy will spread quickly through the cover,” said Mr Teo.

SMRT’s Mr Nathan added that it is safe for passengers to travel in trains during a lightning storm as trains are protected by a Faraday Cage.

“This is an enclosure formed by conductive material that blocks electric fields and electric currents, such as lightning strikes, from entering the trains. During lightning, the electric current will travel through the outside shell of the train and not into the cabin. It then travels through the wheels to the track.”