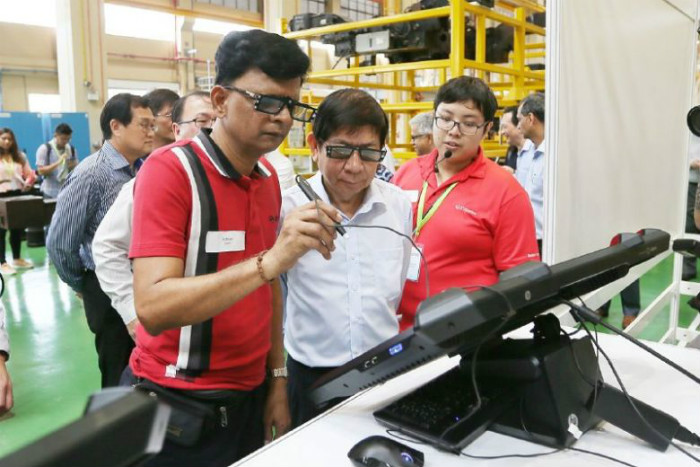 So far, upgrading work has been done on two rail assets – sleepers and the third rail, said Mr Khaw. Work still needs to be done on the signalling system, the power supply, trains and track circuits, he added.

“That is why we need more engineering hours. This can only come if we reduce train operating hours. It is a zero-sum game,” said Mr Khaw at the Future Railway Technology for Depot and Trains, held at SMRT’s Tuas West Depot on Monday (Nov 13).

Mr Khaw was reiterating the call he made in Parliament on Nov 7, when he described the limited engineering hours as a “significant obstacle” to the renewal of ageing rail assets. Sleepers are used to hold rail tracks in place, while the third rail supplies power to trains.

He said then that “many more” extended engineering hours are needed, and this may result in shortened operating hours even on weekdays.

Engineering hours are currently limited to about three hours a night – when trains are not in service – for the 30-year-old North-South and East-West lines, though these have been extended on occasion to facilitate upgrading works.

When sleepers on the East-West Line were being upgraded, certain stretches of the line were closed earlier to give rail workers more time on the tracks. Some stations on the line were also opened later on Sundays.

The Bukit Panjang LRT line is also currently starting service at 7am instead of 5.30am on Sundays for an eight-week period which started on Nov 12, to facilitate the replacement of ageing rail mounting frames and rail expansion joints.

Mr Khaw noted that while the Tuas depot, which opened in June, comes with a power substation that has increased the power capacity for the rail network by 50 percent, existing equipment in the older substations has “aged significantly and is due for renewal”.

The North-South and East-West lines were previously drawing power from four substations – Buona Vista, Bishan, Stamford and Yasin – with the peak-hour power load at about 80 percent of the network capacity.

This was anticipated to increase by an additional 25 percent, with the opening of the Tuas West Extension and completion of resignalling works, said Mr Khaw. This would force SMRT to tap backup reserves, he added.

“We were cutting it real close. And the need to reduce overcrowdedness in trains forced us to add new trains, further pushing the limits on our power capacity.”

Engineering hours are currently conducted outside of operating hours for the North-South and East-West lines.

Mr Khaw added that a “qualitative upgrade” to train depots is needed, to build Singapore’s capabilities in “predictive maintenance” for its rail network.

At the event, Mr Khaw viewed an array of technology being developed for use on the rail network here, including augmented reality and autonomous mobile robots.