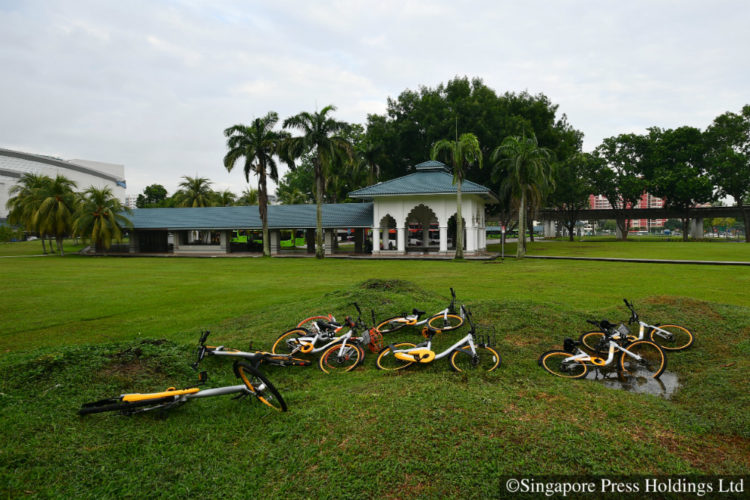 Bicycles from bike-sharing firms abandoned by users in a field near Pasir Ris bus interchange on May 2017.

The Land Transport Authority (LTA) announced on Thursday (Oct 5) that it had signed an agreement with bicycle-sharing firms here, as well as the National Parks Board (NParks) and all 16 town councils, to encourage the responsible use of shared bikes in public spaces such as public paths and parks.

Under the agreement, operators will have to adopt geo-fencing technology by the end of this year. This will let the five firms – GBikes, Mobike, oBike, ofo and SG Bike – know whether their two-wheelers have been parked within designated parking zones, as well as take measures to prevent indiscriminate parking.

The firms will also have to take part in an education campaign on safe riding and responsible parking, said the LTA, adding that they had “proactively taken concrete steps to do so” by co-funding public education initiatives.

Bike-share operators will also be required to remove faulty bicycles within a day, and provide public liability insurance for users.

“All operators have also agreed to share anonymised trip data with LTA, to facilitate the planning of active mobility infrastructure,” said an LTA spokesman, adding that this information will only be released to the relevant agencies to facilitate investigation and enforcement work in the case of accidents resulting in injury, death or property damage.

The agreement also applies to other shared devices, such as shared personal mobility devices and power-assisted bicycles, otherwise known as e-bikes.

“LTA will continue to take strict enforcement action against indiscriminate parking, and consider stronger regulatory measures if bicycle-sharing operators do not operate responsibly,” said the authority.

The LTA added that there will be more than 4000 yellow bike parking boxes – which can accommodate 20,000 bicycles – for both privately-owned and shared two-wheelers by the end of this year.