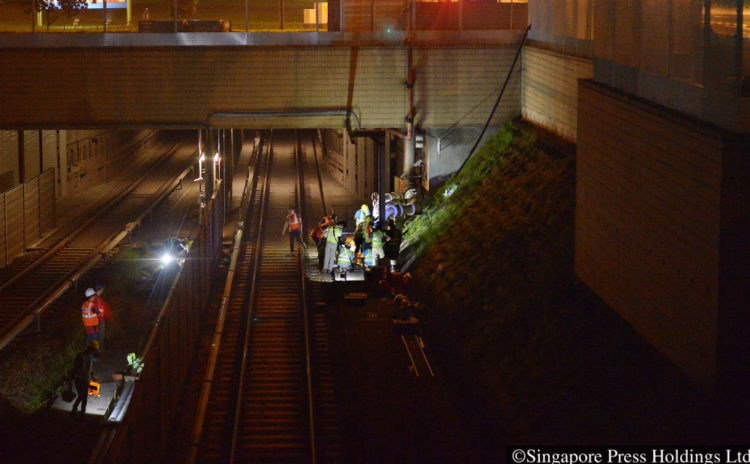 Operations to remove sludge from tunnels beneath the tracks appeared to be under way at Bishan MRT station in the early morning of 1 Nov 2017.

The lack of maintenance led to the failure of a pump system and the flooding of the train tunnel causing a massive 20-hour disruption on the North-South Line on Oct 7.

SMRT in a statement on Tuesday evening (Oct 31) said that it found its maintenance team had signed off on work done to the pump system on three occasions since December last year but such work was not actually carried out.

LTA added that it will make its recommendation on the penalties to the LTA Board after completing its full investigations.

Separately, the National Transport Workers’ Union (NTWU) said that it would ensure any disciplinary action taken by SMRT against its workers would follow due process and would be fair and appropriate.

SMRT on Tuesday said that the manager and staff responsible for the maintenance work at the pump have been suspended and are assisting with investigations.

It also urged SMRT to put training for its workers as one of its top-most priorities.

LTA’S STATEMENT:
As the regulator, the Land Transport Authority (LTA) views breaches of all rail operating licences seriously. This includes those pertaining to the maintenance of the rail operating assets.

LTA is deeply concerned by SMRT’s findings that maintenance was not done at the Bishan sump pump. LTA will independently evaluate SMRT’s investigation findings on the suspected falsification of maintenance records into the 7 October tunnel flooding incident. LTA is carrying out a full investigation into the incident and will make its recommendation on the penalties to the LTA Board in due time.

To strengthen checks on SMRT’s maintenance audit and inspection regime as well as to supplement SMRT’s current efforts, LTA and SMRT will be setting up an independent joint readiness inspection team that reports to the joint LTA-SMRT board technical committee, which oversees maintenance and asset renewal.