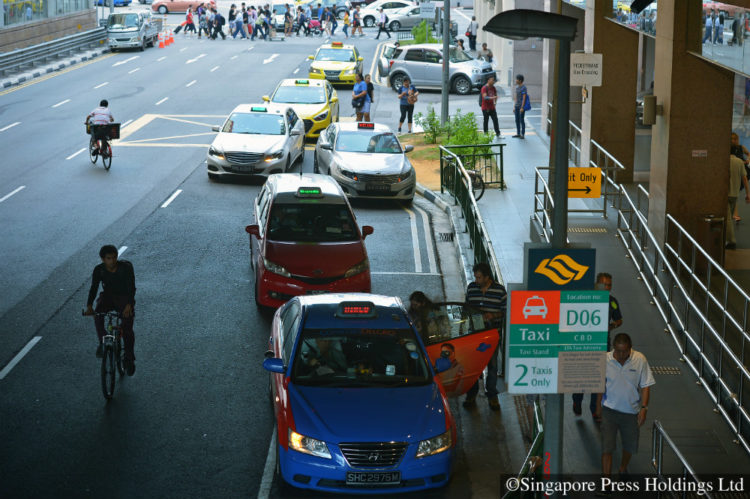 Traffic and commuters at the taxi stand outside OG Building in Chinatown during the evening.

“LTA will monitor recent trends to see if these regulations need to be reviewed,” a spokesman for the authority told The Straits Times on Thursday (Aug 3).

Its response came shortly after the National Taxi Association lobbied for the rule to be changed.

National Taxi Association adviser Ang Hin Kee said delivery services would be a complementary business, and that they would not adversely affect taxi availability.

He said: “As it is, there is excess capacity during off peak hours. This will reduce empty cruising.”

The LTA had long stood firm on its rules, which are meant to prevent taxi drivers from being distracted by non-fare tasks.

“Taxis and private-hire cars are public service vehicles licensed to carry passengers for hire and reward,” the LTA spokesman noted.

Dr Walter Theseira, an economist and senior lecturer at the Singapore University of Social Sciences, countered by saying that the transport sphere has already evolved, and that taxis are not the only ones serving commuters.

“Under the implied new regulatory stance, it would seem more consistent to me if all vehicle drivers and all vehicles were allowed to provide any reasonable transport service except in cases where there are policy concerns,” he said.

These exceptions would include the carrying of dangerous goods such as chemicals “because it might affect fitness of use for a human passenger”.