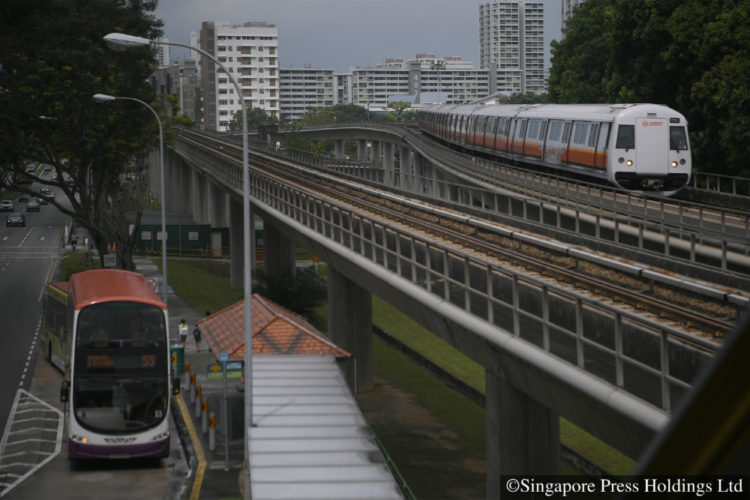 An SMRT train is seen heading to Bishan MRT station as an SBS bus leaves a bus stop on 9 November, 2017.

This will strengthen the public transport network, while providing it with “some sort of a backup when needed”, he said in a Facebook post.

In his post, he thanked commuters for giving maintenance staff extra engineering hours through early closures, later opening hours and some Sunday closures at MRT stations.

“This has helped to expedite our work, whether it is re-signalling, or the installation of noise barriers, or more intensive maintenance and inspection,” he wrote.

On Saturday night, he also visited a team of rail workers on the tracks, and was shown how the new signalling system by French firm Thales has made single-line operations for the North-South Line (NSL) possible. This new communications-based train control system is running on the NSL – Singapore’s oldest MRT line – with re-signalling works for the East-West Line to be completed by June, LTA has said.

“Simply put, trains travelling in both directions are now able to use a single tunnel while the other tunnel is closed for maintenance works,” Mr Khaw said, adding that this will give engineers flexibility when planning maintenance works, which was “not possible under the old signalling system”. It would also reduce inconvenience faced by commuters.

The new system, which replaces the current fixed-block signalling system, will allow trains to run at faster intervals of 100 seconds, instead of 120 seconds.