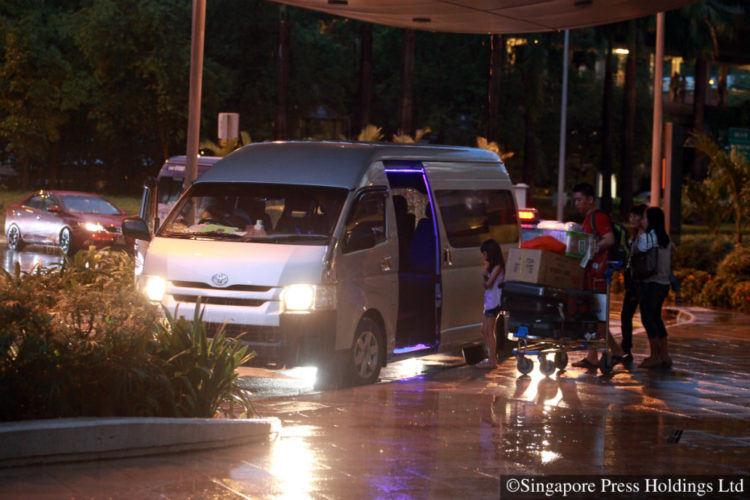 A family of four boarding a private mini-bus from the back of HarbourFront Centre.

The Land Transport Authority (LTA) is stepping up its enforcement checks on bus drivers who tout their services, even as several drivers were hauled up for their touting activities last year and the year before.

These drivers are not employed by major transport operators such as SMRT or SBS Transit, but are instead hired by private bus companies and drive vehicles like minibuses.

LTA is conducting more frequent checks at high traffic areas, potential hotspots and areas that people have given feedback about.

Touting cases decreased from 19 in 2015 to 11 in 2016, but a small number of errant bus drivers continue to solicit passengers at hotspots including those frequented by tourists, LTA said in a statement.

Two drivers were charged, 14 had composition sums imposed on them, and 12 drivers were issued warnings for touting their services between Jan 1, 2015, and Dec 31, 2016.

He approached passengers, especially tourists who were likely to be unfamiliar with taxi fares, and quoted flat fares of up to $50 for his transport service.

He has previously been warned and paid composition sums for illegal solicitation, but he continued his touting actions, LTA said.

He was convicted in court on July 11 this year and fined $800 for the two occasions of illegally soliciting passengers at public places.

LTA revoked his vocational licence on Aug 29 this year.

Under the Road Traffic Rules, bus drivers are not allowed to solicit passengers at public places. Those caught doing so will be fined a composition sum of $500, and repeat offenders will be prosecuted in court.

“We will continue to carry out regular enforcement checks to deter errant bus operators, and will not hesitate to take stiff action,” he said. “We will also continue to work with stakeholders, such as property owners and managers, to address this issue.”