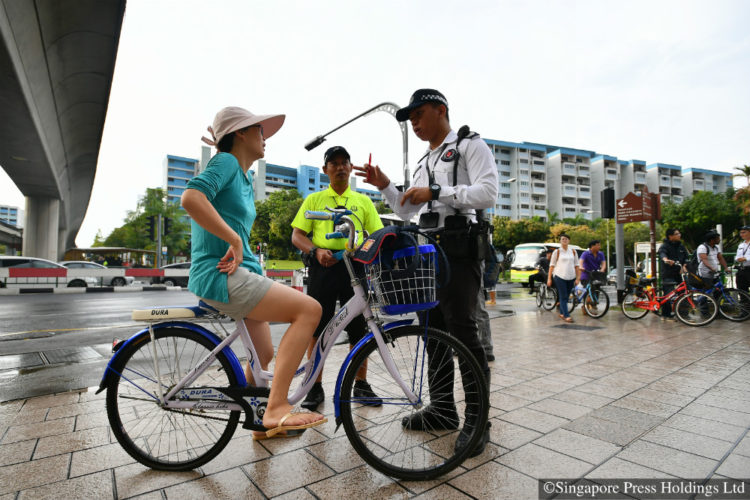 Some cyclists were riding at high speeds, while others jumped a red light.

A few even used their mobile phones while cycling.

These were some of the unsafe riding practices seen at a busy intersection in Tampines during an enforcement operation by the Land Transport Authority (LTA) and Traffic Police (TP) yesterday.

The exercise, in the east of Singapore, reinforced the importance of using the road safely to cyclists, power-assisted bicycle (PAB) riders and users of personal mobility devices (PMD).

Active Mobility Enforcement Officers from LTA worked with their TP counterparts in Tampines and Pasir Ris to talk to riders. TP also conducted a separate operation in a third location at Bayshore.

Mrs Queena Wee, 43, was cycling to work when she was stopped and advised to dismount by LTA and TP officers outside the Tampines MRT station.

The officers spoke with her about safe riding habits and also gave her a booklet with more information.

It was the second time Mrs Wee had seen the officers on patrol. She admitted she had “felt a little frightened at first” but added that she now sees how the activity helps raise awareness of safety practices.

The three locations were chosen for having a high volume of bicycle, PAB and PMD users. Officers stopped and spoke to 79 users in total.

“Everyone is encouraged to observe good road sense and take all necessary precautions to protect themselves as well as look out for other users when sharing the footpaths, cycling paths and roads,” LTA and TP said in a joint statement yesterday afternoon.

The Active Mobility Enforcement Officers unit was set up last May to strengthen enforcement of rules for PMD users and cyclists.

In January, the Active Mobility Bill was passed to allow PMDs on public pathways if devices meet certain requirements.