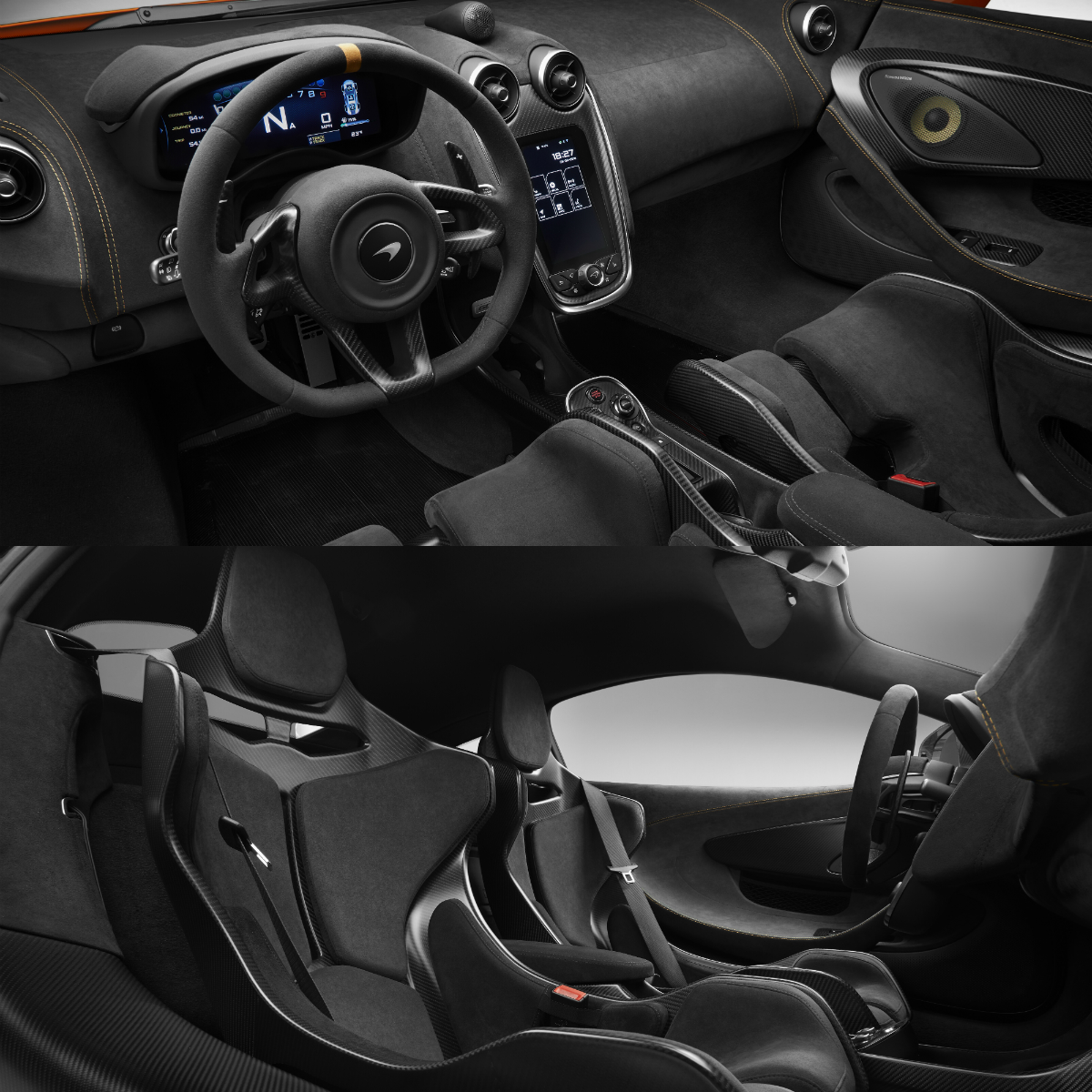 The 600LT epitomises the McLaren philosophy of producing lightweight super-sportscars that deliver extreme performance and are exceptionally rewarding to drive.

The arrival of the new 600LT, which is built to excel on roads and race circuits alike, marks both the beginning of the next chapter in the McLaren ‘Longtail’ (LT) story and the setting of a new benchmark for super-sportscar performance. The 600LT epitomises the McLaren philosophy of producing lightweight super-sportscars that deliver extreme performance and are exceptionally rewarding to drive.

With the engine management system of the 3.8-litre twin-turbocharged V8 recalibrated and less back-pressure from a top-exit exhaust system that is even shorter and more extreme than that of the McLaren Senna, allowing the engine to breathe more freely, the 600LT can call on peak power of 600hp at 7500rpm and maximum torque of 620Nm at 5500-6500rpm.

These outputs deliver astonishing levels of performance: 0-100km/h takes just 2.9 seconds, matching the acceleration of the revered McLaren 675LT Super Series model. Zero-to-200km/h is achieved in a remarkable 8.2 seconds and the 600LT can continue gathering speed to a top speed of 328km/h.

Inspired by McLaren’s renowned 675LT models and their iconic ‘Longtail’ F1 GTR racing predecessor, the new addition to the LT family has all the physical hallmarks of a true McLaren ‘Longtail’, including an extended front splitter, lengthened rear diffuser, fixed rear wing and elongated silhouette – in this case by 74mm compared to a 570S Coupe.

The unique bodywork optimises aerodynamic performance, working in conjunction with the flat carbon fibre floor of the 600LT to produce the 100kg of downforce at 250km/h that generates more grip and greater high-speed stability and is a significant contributor to the car’s excellence on a track.

Extensive use of carbon fibre, including for the monocoque chassis that is some 25 percent stiffer than a comparable aluminium chassis and for the new aerodynamic features, together with lightweight materials throughout the track-focused cockpit, helps the 600LT to achieve a lightest dry weight of 1247kg and equivalent power-to-weight ratio of 481hp per tonne.

With the optional Super-Lightweight Carbon Fibre Racing Seats developed for the McLaren Senna fitted, the 600LT weighs 100kg less than a 570S Coupe – a remarkable reduction that delivers tangible benefits in every aspect of the supercar’s performance. 600LT buyers wanting to go to another level of weight-saving can specify the MSO Clubsport or MSO Clubsport Pro packs from McLaren Special Operations.

The 600LT has lighter and stiffer suspension components from the 720S, the adoption of the forged aluminium double wishbones and uprights not only improving dynamic capabilities, but also reducing weight by 10.2kg. Ride height is reduced by 8mm over other Sports Series models and front track is increased by 10mm, to deliver a more precise driving experience.

The independent, continuously variable adaptive dampers and anti-roll bars featuring on all McLaren Sports Series models have been retained, but are significantly re-engineered to work with the new suspension geometry and create the track-focused performance demanded of the new 600LT.

The adoption of the braking system from the McLaren Super Series, which features lightweight aluminium callipers and stiffer carbon-ceramic discs, reduces weight by 4kg. Working in conjunction with an all-new brake booster developed using learnings from the McLaren Senna, the result is incredibly responsive and progressive pedal feel during braking and a 200km/h-to-standstill distance of 117 metres – just one metre more than that of the mighty McLaren P1.

The cockpit of the 600LT exemplifies both weight reduction and a driver-focused environment. Lightweight Alcantara trim material is used extensively throughout, and the absence of carpet in the driver and passenger footwells and beneath the seats saves 5.7kg, while also exposing the carbon fibre beauty of the MonoCell II chassis construction. The glovebox has been removed and the door pockets replaced with lightweight nets; air-conditioning, satellite navigation and an audio system are all available as no-cost options, not being fitted as standard. Carbon fibre Racing Seats, first seen on the McLaren P1 and subsequently used in the McLaren 675LT, are standard-fit and save a further 21kg. 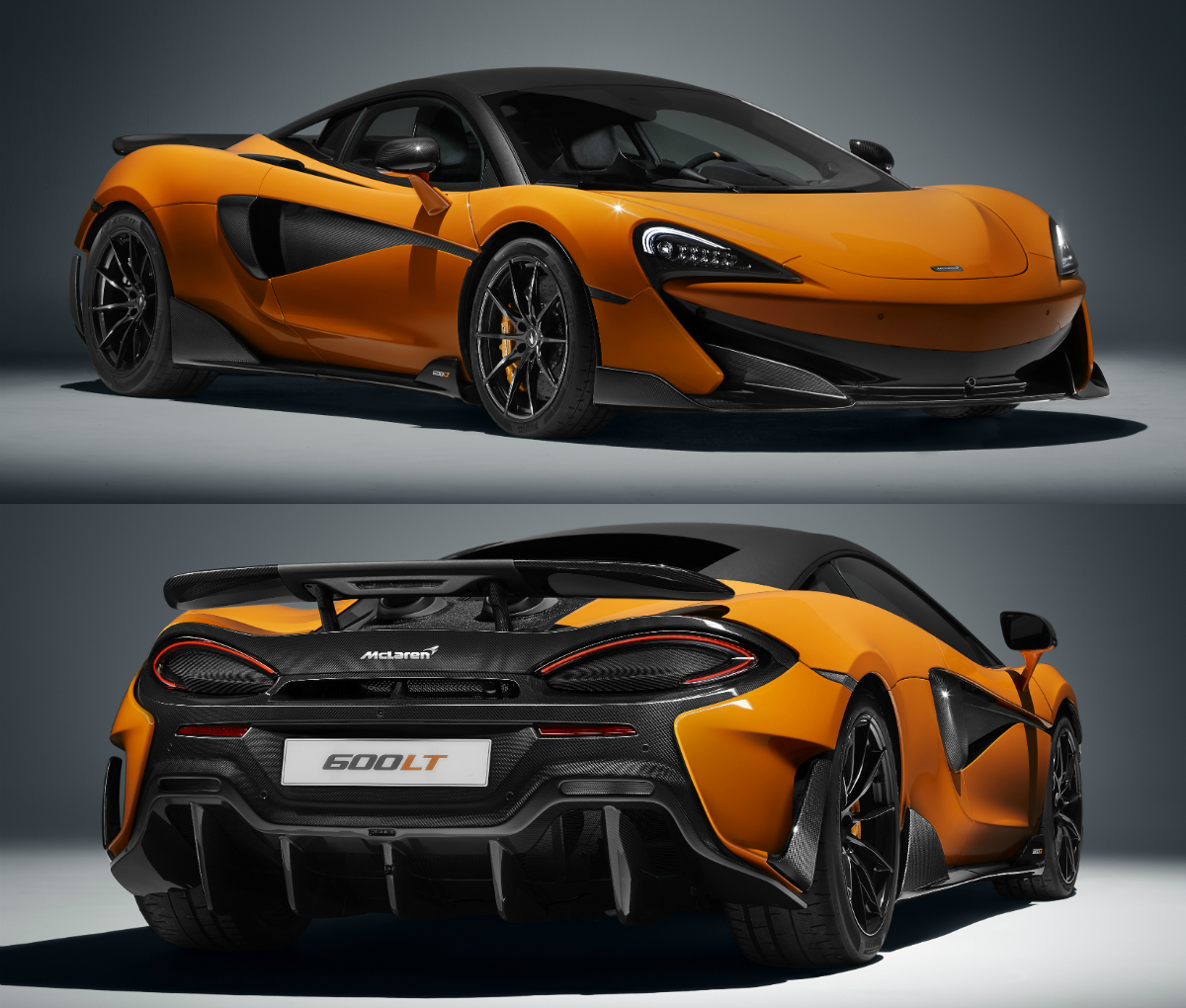 The 600LT epitomises the McLaren philosophy of producing lightweight super-sportscars that deliver extreme performance and are exceptionally rewarding to drive.