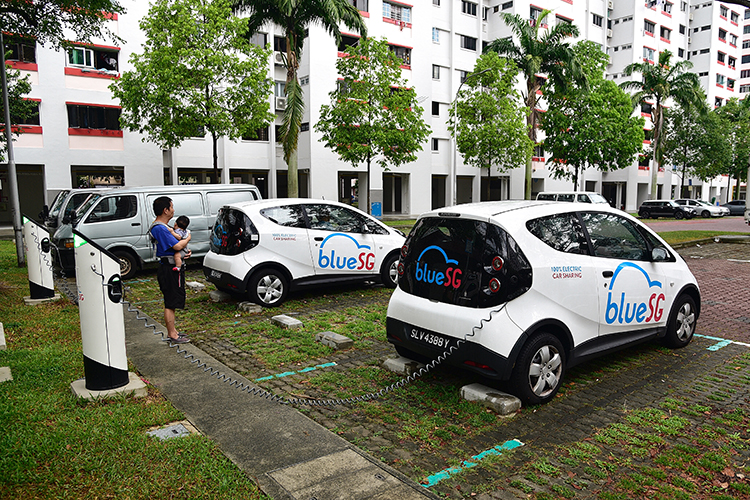 A passer-by stands near the charging point of the Blue SG electric vehicle at block 7 Haig Road on 23 April 2019.

This comes after electric car-sharing operator BlueSG released 99 charging points across 25 locations for public use.

The move, effective from 3pm on Tuesday, came 1.5 years after the firm started operations here.

The number of chargers open to all electric vehicle (EV) owners constitutes 13 percent of BlueSG’s network, which comprises 755 chargers at 191 stations.

The company had previously committed to opening up 20 per cent of its projected network of 2000 chargers by next year.

In a statement yesterday morning, BlueSG said private vehicle owners will have to subscribe to the service on a mobile application or the BlueSG website.

A year’s membership costs $20. Tariffs are $1 per hour for the first three hours, and $2 per hour after that.

All available charging service stations will be displayed on the BlueSG app.

EV owners can book a charging point up to 45 minutes in advance.

Observers said BlueSG chargers are best for casual charging when an EV driver is looking for parking.

This is because they are mostly slow chargers, which take several hours to fully charge a typical electric car.

They added that the tariffs are relatively high on their own, but are more palatable when viewed as part of parking charges.

“The location of its charging points, especially those in the city fringe and Housing Board estates, will provide even greater peace of mind to EV owners in Singapore.”

Komoco has two electric models in its line-up: the Ioniq Electric sedan and the Kona Electric compact crossover.