No sound or warning prior to PIE viaduct collapse | Torque
Loading posts...
0 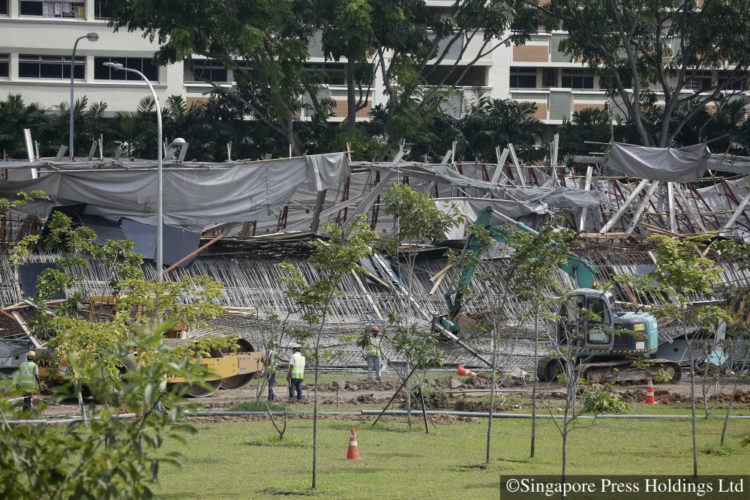 A 40m section of a viaduct on the PIE collapsed on July 14, leaving a tangled mess of bars and broken concrete at a construction site adjacent to a slip road in Upper Changi Road East. One worker was killed in the incident.

When residents of Block 638 in Tampines looked outside their windows on the morning of July 14, they saw a scene of devastation.

A 40m section of a viaduct on the Pan-Island Expressway (PIE) had collapsed, leaving a tangled mess of bars and broken concrete in a construction site adjacent to a slip road in Upper Changi Road East.

The collapse occurred in the early hours of the morning, killing Chinese national Chen Yinchuan, 31, and injuring 10 other workers who had been laying cement on the structure. It was described as one of the worst worksite accidents after the Nicoll Highway tunnel collapse in 2004 that killed four people.

The survivors, who spoke to The Straits Times, said they were caught by surprise.

Bangladeshi worker Raihan Mohammad and fellow workers from two subcontractors working for main contractor Or Kim Peow (OKP) Contractors said they were more than halfway done with cement works on the central deck when the structure came crashing down.

Said Mr Raihan, 24, two weeks after the incident: “It all happened in five seconds, and we fell. No sound, no warning, and it fell.”

His co-worker Hossain Mohd Mithu recalled seeing an unusual gap on the section of the viaduct they were working on.

When the workers pointed out the gap to the site supervisor that morning, they were told that it was not a problem and to continue working, said Mr Hossain, 22.

It is not known if the gap of between 2cm and 5cm had played any part in the structure’s collapse.

But by 3.30am, the viaduct had collapsed. The completed viaduct would have linked the Tampines Expressway to the PIE.

All work at the construction site was stopped following a multi-agency investigation. A spokesman for the Building and Construction Authority told ST last Friday that investigations are “still ongoing”. Initial findings point to the design of supporting structures called corbels as the cause of the collapse.

It was disclosed in a Parliament sitting in August that contractor OKP had the lowest quality score among qualified bidders.

Some MPs asked why OKP was awarded the PIE viaduct contract in November 2015 despite a fatal accident just two months before at another OKP worksite. Senior Minister of State for Transport Lam Pin Min replied in Parliament that the contractor’s “lowest tender price and good track record in finishing many similar infrastructure projects over the past 10 years” outweighed its low safety score.