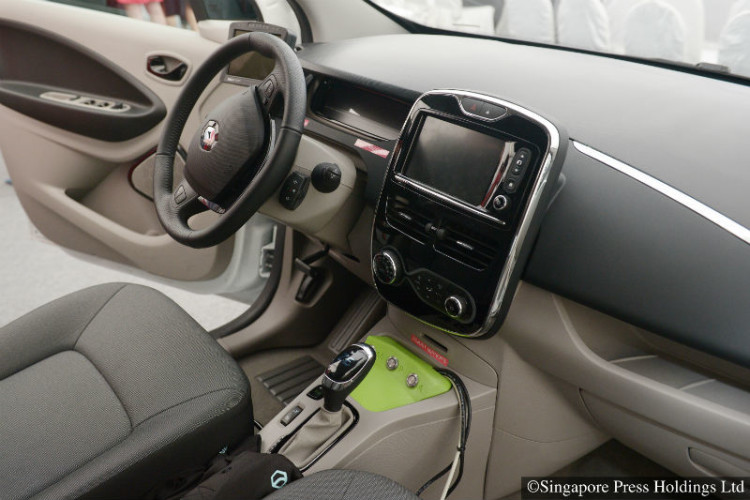 Interior of the Renault Zoe, an autonomous vehicle by start-up nuTonomy.

A research collaboration agreement was signed yesterday between TNO and the Centre of Excellence for Testing and Research of Autonomous Vehicles – NTU (Cetran).

The collaboration aims to accelerate the safe introduction of autonomous vehicles in Singapore and the Netherlands, said a TNO spokesman.

Formed last year, Cetran supports the Land Transport Authority in the development of test requirements to enable the safe, large-scale deployment of autonomous vehicles here. An outdoor test track is scheduled to open later this year.

TNO has conducted vehicle platooning tests in Europe – where a human-driven vehicle leads a convoy of driverless ones via wireless communications – on public roads , using cars in 2012, then trucks in 2015.

The two bodies will collaborate on a programme addressing the operational safety and security of autonomous vehicles. For this, TNO will contribute Streetwise, a scenario-based methodology that uses real-life data to generate public road scenarios for the virtual testing of autonomous driving.

Said TNO chief operating officer Wim Nagtegaal: “I am convinced this agreement is a great way to expand our collaboration, jointly developing the safe implementation of autonomous vehicles in an urban environment, with expected results applicable both to Singapore and the Netherlands.”

The Government sees AVs as a key part of the Republic’s move towards a car-lite future. Three years ago, it formed the Committee of Autonomous Road Transport to chart the direction for self-driving technology here.