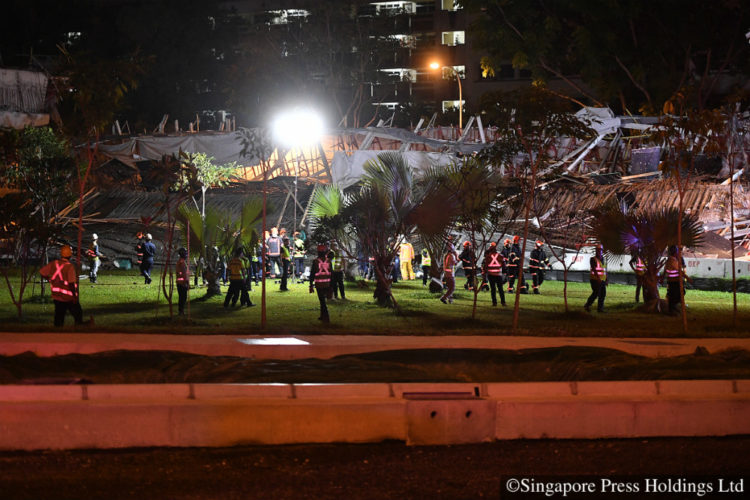 A number of possible reasons were cited for the tragic collapse of an uncompleted road viaduct linking the Tampines Expressway (TPE) to the Pan-Island Expressway (PIE). And most were attributable to human error.

A veteran civil engineer said corbels are “extremely strong structures” which do not give way “just like that”, referring to the Land Transport Authority’s (LTA) preliminary findings that “corbels supporting the pre-cast beams had given way”.

The engineer, who declined to be named, said corbels are designed to support a lot of stress. “You will need to drop a number of cranes from a height of 100 ft to make one of them give way,” he added.

So what caused them to give way?

“There could have been an error in the design, or the structures were not constructed to design specifications,” the engineer, a member of the Institution of Engineers, Singapore, ventured.

Either of these could have happened despite the stringent checks and counter-checks in place, where civil work designs are scrutinised and signed off by independent qualified third parties.

“In some cases, temporary structures are not allowed to rest on corbels,” the engineer noted. “This is because when concrete is being cast, it does not have any strength, and the whole thing becomes deadweight.

“To be fair, we don’t know at this point if this was the case.”

Another possible reason for the structural failure was ground movement. “If the temporary structure was supported by ground structures, and if the ground sank, it could cause a collapse,” he said, but noted that the builders would have also tested the ground for stability before setting up the support structures.

In its initial statement after the incident which took place at 3.30am on Friday (July 14), the LTA said the contractor, local company Or Kim Peow Contractors, “was carrying out works to cast the decking for the new viaduct adjacent to the slip road from Upper Changi Road East to PIE” just before the collapse.

One worker died in the accident, while 10 others were injured.

Asked if workers are supposed to be on top or below a structure when it is being cast, the civil engineer said: “On paper, they are not supposed to be, for safety reasons. But in practice, it is usual for men to carry out checks during casting to spot and rectify any mistakes along the way.”

Meanwhile, the Building and Construction Authority has instructed the project’s qualified person to inspect the remaining supporting structures of the rest of the viaduct.

It has also revoked the permit for the construction works, and “will be investigating the cause of the incident”.

“As a safety precaution, the adjacent girders will be propped and supported,” it said in a statement. “Nevertheless, we noted that the rest of the constructed viaducts are not above any public roads and will not pose a risk to the public.”