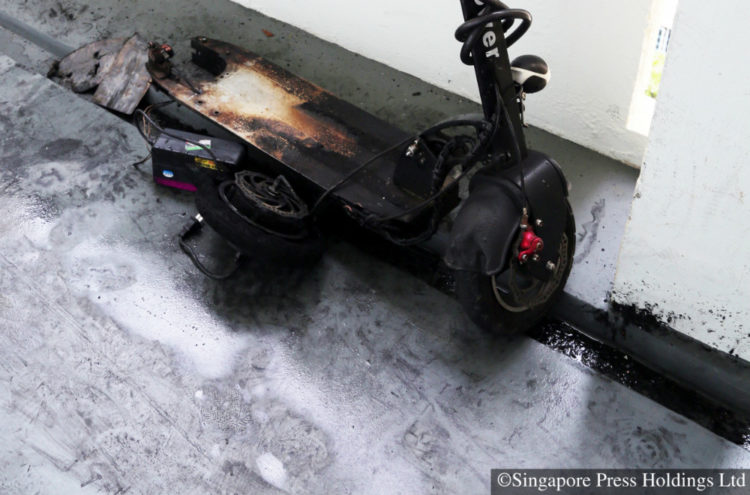 The product safety review was announced by Spring Singapore and the Land Transport Authority (LTA) in a joint statement on Thursday (Nov 16), in response to queries from The Straits Times.

It comes after more fires involving e-scooters and electric bicycles were recorded this year. Between January and September, the number of fires rose to 31, up from 19 in the same period last year.

There were three such fires in the past month, two of which took place last week.

Experts have said that cheap batteries, which are of inferior quality and can easily overheat, could have caused the recent fires. “Unbranded” batteries can be bought for as little as $60, compared with batteries from reputable brands that cost between $200 and $300.

Faulty batteries or those of poor quality may not stop charging even though they are full, and such overcharging can contribute to fire risks.

Currently, safety guidelines for the use of PMDs cover only their usage in terms of weight, width and speed under the Active Mobility Act. They can have a maximum unladen weight of 20kg, a maximum device speed of 25kmh and a maximum width of 70cm.

There are no safety requirements for batteries in PMDs, though power adaptors – which are used for charging PMDs – have to be certified and have to carry Spring Singapore’s Safety Mark before they are sold in Singapore.

Spring Singapore and LTA did not indicate when the review is expected to start, or how long it will take.

But experts say that the new requirements could address the issue of fire safety, besides general guidelines currently in place.

Dr Soh Chew Beng, deputy director of the electrical power engineering programme at the Singapore Institute of Technology, said battery packs of PMDs could be required to undergo electrical testing.

For example, an overcharge test will tell whether a battery pack will rupture or explode if there is overcharging. A temperature test will make sure that the component cell batteries can maintain their operating currents, voltage and temperature limits during charging.

Professor Rachid Yazami of the Energy Research Institute at Nanyang Technological University said that while it is difficult to pinpoint factors that contribute to fire risks in PMDs, batteries could, in future, be required to be able to cut off charging when the battery temperature climbs above 60 deg C.

“It becomes riskier when the temperature goes beyond that,” he said.

Mr Lim Biow Chuan, who sits on the Government Parliamentary Committee for Transport, said he hopes the review will include requirements for PMDs to be certified compliant and to be registered with the authorities in the future.

Under new rules, only owners of power-assisted bicycles are required to register them with the LTA. From Feb 1 next year, those who fail to do so could be jailed and fined.

“It’ll be easier to track down devices that have been involved in accidents, or pose a risk to others,” Mr Lim said.