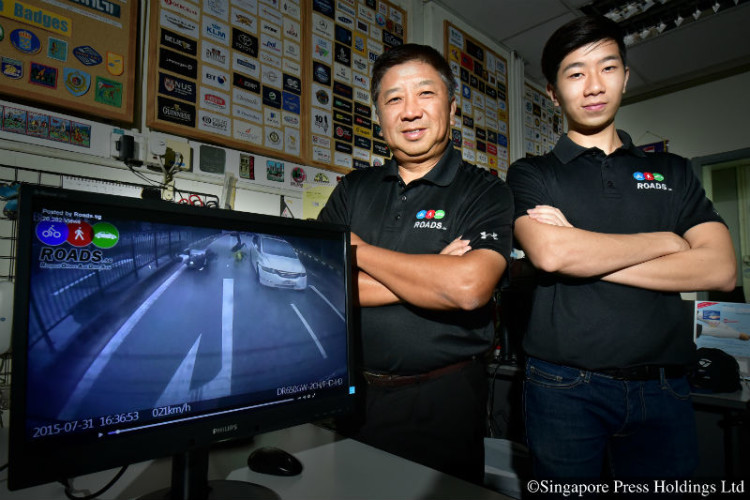 Mr Fong and his son, Jeremy, run the Roads.sg website which hosts user-submitted clips of bad road behaviour. Over the past few years, road safety interest groups such as Roads.sg, Singapore Reckless Drivers and Beh Chia Lor have gained a large online following.

With their propensity to shock, online clips of accidents – like that of a motorcyclist being mowed down by a bus, or of a car running into a pedestrian – can rack up tens of thousands of views.

But they are not meant to entertain, said the father-and-son team behind Roads.sg, a website that hosts such user-submitted videos.

Instead, they hope that motorists will be impacted by seeing how negligence or carelessness on the roads can have deadly consequences.

“A picture speaks a thousand words, they say. But to me, a video can say a million,” said Mr Aloysius Fong, 58, a businessman who founded and runs Roads.sg with his son Jeremy, 23. Roads is an acronym for Respect Others And Drive Safe.

Over the past few years, road safety interest groups such as Roads.sg, Singapore Reckless Drivers (SRD) and Beh Chia Lor have gained a large online following.

Mr Fong estimates there are “hundreds of thousands” of drivers who own an in-vehicle camera.

These record happenings on the roads, from major accidents to near-misses, and poor road etiquette, such as tailgating and abrupt lane changing.

These videos offer an insight into the dangers of bad road behaviour.

“Imagine: You stop at a red light and a family is crossing the road. A car just zooms pasts everyone and nearly takes a life. There are no Traffic Police there, just you and your camera recording,” Mr Fong said.

On Roads.sg, he and his son also make it a point to post – alongside the videos – the penalties for breaking traffic laws, as public education.

The three sites have each garnered a sizeable audience: SRD, which was reportedly started in 2012 by graphic designer Marc Lee after his own motorbike accident, has a Facebook following of more than 105,000.

Roads.sg’s Mr Fong is now revamping the website, which started in end-2014, so that the clips will be searchable via licence plate numbers of motorists who display poor road behaviour.

“I want to keep a whole library of all the numbers of vehicles in Singapore (whose drivers) are driving recklessly, be it purposefully or by mistake,” he said.

Users who submit their clips to Roads.sg are requested to include the licence plate number of the motorist involved, whenever feasible.

Mr Fong said such a library can have a variety of future applications, such as being referenced by insurance companies, for example, which can re-evaluate a motorist’s premiums if he is found to be driving recklessly all the time.

Taxi, bus and logistics firms can also tap the library to see if their drivers are behaving dangerously.

He added: “These videos are also useful in providing insight and clarity in the form of video evidence of violations and accidents.”

In November, the police asked users of such road safety community sites to make reports via the Traffic Police’s online portal.

“TP will look into the matter and take follow-up actions if the violations come to TP’s attention,” a spokesman told The Straits Times.

Mr Fong, who has invested $60,000 of his own funds in Roads.sg, has no plans to monetise the site. For him, it is about making motorists more conscientious and safer road users.

He said many people drive recklessly because they think that there are too few policemen on the road and that they will not be caught.

“Bad habits and attitudes are hard for authorities to catch, and we hope to influence people’s driving behaviour,” he said.