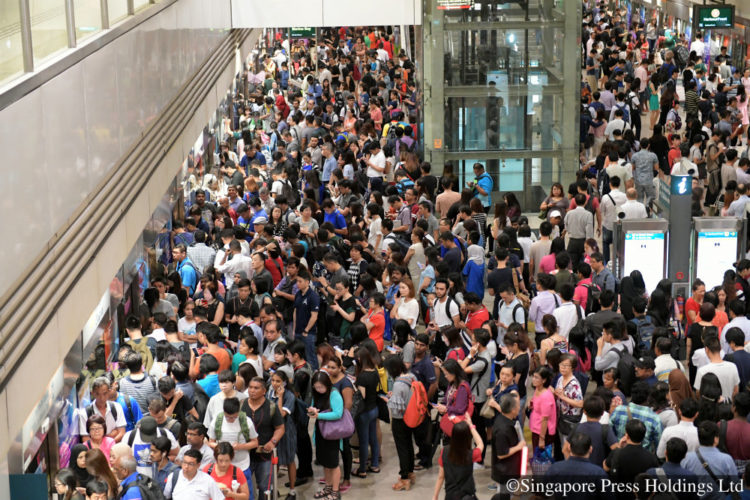 The crowd at Bishan MRT station on Friday at about 8.30am.

Commuters were hit by another round of train delays on the North-South Line and Downtown Line during Friday (Aug 18) morning’s rush hour, following a two-hour delay during the evening peak hour the day before.

The North-South Line saw a three-hour delay while the Downtown Line was disrupted for about an hour.

At 6.30am, SMRT tweeted that an additional 45 minutes travelling time was needed between Marina South Pier and Sembawang on the North-South Line due to a signalling fault.

It later advised commuters to take other MRT lines or seek alternative transport towards the city area.

At 8.22am, it tweeted that train services were being progressively restored, and the travelling time to be added was down to 30 minutes. It was later lowered to 15 minutes at 9.07am.

Train services on the line finally resumed at 9.22am.

Meanwhile, SBS Transit tweeted at 6.25am that there was no service on the Downtown Line due to a signalling fault. It later said at 7am that service has resumed but to expect additional travelling time.

At 9.03am, it tweeted that trains were running normally on the Downtown Line, and apologised for the inconvenience caused.

In a media statement, SBS Transit said: “Trains could not be launched automatically from the depot to the main line and had to be manually driven. The first train started service at 5.37am, seven minutes later than scheduled, at DT1 Bukit Panjang Station. As trains were progressively put into service, this resulted in an additional travelling time of about 15 minutes.”

During the affected period, free bus rides and bus bridging services were available for commuters to continue their journeys. It added that the Singapore Examinations and Assessment Board (SEAB) was also informed about the delay.

“We apologise to affected passengers for the inconvenience caused. Meanwhile we are investigating the cause of the signalling fault.”

With the O levels and PSLE oral exam taking place, affected students were given time chits from SMRT.

On its website, SEAB has instructions for candidates who are affected by train service disruptions.

Candidates who are able to make it to their examination centres before the end of the paper, should still make their way there, where they will be given the full duration to sit the paper.

School candidates who arrive after the paper has ended or are unable to reach, must inform their schools immediately, while private candidates must report to the Chief Presiding Examiner of the examination centre.

SEAB also provided a list of examination centres near MRT stations, which candidates could head to.

The Ministry of Education posted on its Facebook page at 9.36am, telling primary six students who were going to take their oral exams not to worry if they had been delayed on their way to school.

“The PSLE oral exam is on schedule but arrangements will be made for those who arrive late. You need not pick up any excuse letter at the MRT station. Just let your school know. If necessary, you will be able to take the exam at a later time.”

Kuo Chuan Presbyterian Primary School student Shalini Kallimuthu, 12, who was supposed to take her English language PSLE oral examination at 7.30am, said she only arrived at school after 8am due to the train delay.

“I came from Bukit Batok. The train (to Bishan) was very slow. I was rushing to come to school, and was a bit angry and anxious about it,” she said. “I was afraid that I might be the last one to arrive and my school would not allow me to take the exam. I was one hour late.”

But she added that her teacher called while she was on the way, and said there was nothing to worry about as the school would still allow her to take the examination.

Guangyang Secondary School student Anuar Abdullah, 17, said he was around 30 minutes late for his mathematics N-level preliminary examination. It was supposed to start at 8am.

He added that he lives in Telok Blangah Crescent and usually takes the train from Raffles Place to Bishan station, but was delayed on the North South Line on Friday morning.

“But I could still take (the exam),” he told The Straits Times, adding that the teacher allowed him 25 more minutes for the test.

He said he waited for more than 10 minutes for the train at Raffles Place earlier, and that the platform was crowded.

“(The train was) really slow… and stopped (at some points),” he added.

Another Guangyang Secondary School student, Rachel Low, said she arrived at school close to an hour later than usual – it was the first time she was late.

“From the station, I ran (to school),” said the 16-year-old Secondary Three student who took the train from Woodlands to Bishan and reached school slightly after 8am.

“The train stopped a lot (between stations),” she said, adding that she received an excuse slip at Bishan station. “A lot of classmates were also late.”

An accountant who wanted to be known only as Mr Francis, 27, said he was intending to arrive at work around 7.30am, but only got to City Hall station at 8am.

“I’m not late, but intended to arrive before 7.30am to start work early,” he said. “I had to take a shuttle bus from Bishan instead.”

Another commuter, Ms Helen Wee, 61, added that she is usually the first to arrive at her office where she works as an administrative staff.

But today, she said she was delayed around 45 minutes, expressing concern. She had arrived from Ang Mo Kio station.

“I usually get to City Hall around 7.30am,” she added. “It’s Friday and I wanted to finish my work early.”

Sales manager Low Fang Ling, 28, who came from Toh Tuck, said she was delayed around half an hour as she had to seek an alternative route to work at the Somerset area.

“I usually take the Downtown Line and change trains at Newton,” she said. “But today I took the East West Line to City Hall and am taking a bus from here instead.”

She added that she has been caught in train delays “countless times” in the mornings and evenings over the past two years.

While she is not late for work this morning, she said such delays can be “disruptive”, particularly when she travels from places like Boon Lay station, and there are fewer convenient alternatives by public transport.

Account executive Ms Candy Tan, 26, who usually takes a bus to work in the Commonwealth area, from her home in Upper Bukit Timah, said that she and her sister both had to take a GrabHitch this morning.

“Of all days for a delay to happen, I have a client meeting in the Raffles Place area this morning,” she said. She originally intended to travel on the Downtown Line to the area.