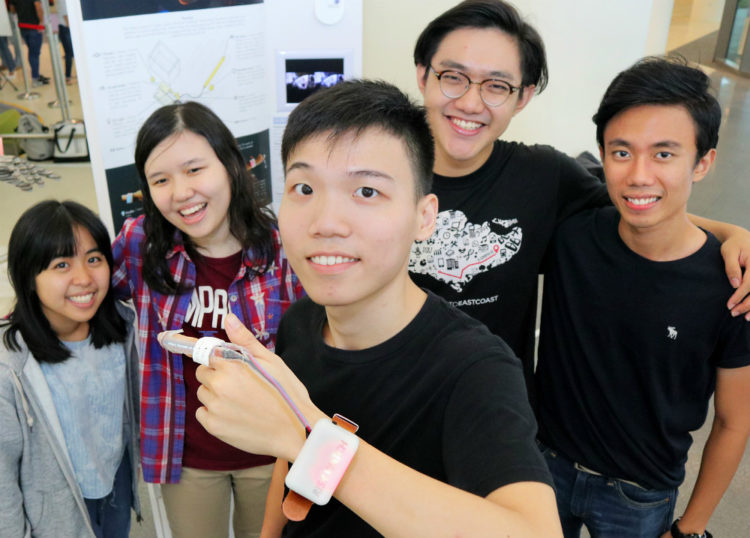 Members of the group that made the Risk Watch: (from left) Odelia Tan, Laura Ong, Jason Swee, Aiden Chia and Loo Jun Wen.

He was in the police during national service and had to drive during the midnight shift. After nearly falling asleep at the wheel several times, Mr Loo Jun Wen, 21, realised how easy it was for motorists to doze off.

His teammate, Mr Aiden Chia, 21, also worries about his taxi driver father’s safety when he does the night shift.

That was what prompted the first-year students from the Singapore University of Technology and Design (SUTD) to come up with the Risk Watch.

It is a device made up of a watch and ring that monitors the driver’s state of wakefulness and stimulates the driver to respond or an alarm would go off.

The prototype, made by a team of five, was one of 87 projects featured yesterday at SUTD’s The Technological Body exhibition, which involved first-year engineering and architecture students teaming up to make design technology to be worn.

Mr Chia told The New Paper: “The consequences of falling asleep at the wheel can be very dangerous and we’ve heard of a lot of accidents happening.”

A recent study by the American Automobile Association showed that driving with less than five hours of sleep is the same as driving drunk.

The prototype took the group 12 weeks to complete and the biggest challenge was making it compact. “Our target audience would be night shift drivers like police officers or even taxi and Uber drivers,” said Mr Chia.

SUTD will shortlist six projects who will attend a workshop where they will produce enhanced versions of their prototypes.