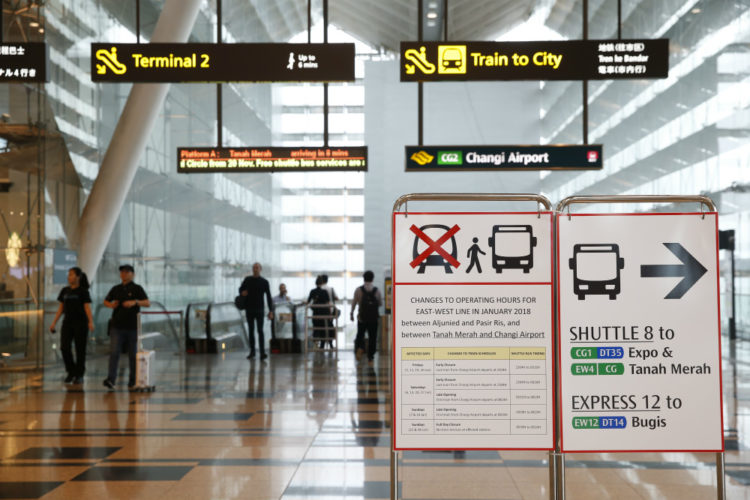 Signs at Changi Airport Terminal 3 informing commuters of the changes to operating hours of the East-West Line on weekends in January 2018.

SMRT will double the number of ground staff deployed for the second month of shorter MRT operating hours on weekends, which started on Friday night (Jan 5).

From about 300 staff previously, it will have up to 600 pairs of boots on the ground, including traffic controllers, crowd marshals and station personnel to guide commuters to alternative travel options, such as shuttle buses.

For the month of January, 10 MRT stations on the East-West Line (EWL) – from Paya Lebar to Pasir Ris, along with Changi Airport and Expo MRT stations – will have shorter operating hours on weekends, including full-day closures on two Sundays, on Jan 21 and 28.

These 10 stations will close earlier at 11am on Fridays and Saturdays, and open later at 8am on Saturdays and Sundays. Train operation hours are usually from 5.30am until midnight.

This is the second round of planned closures, to facilitate rail maintenance works, and to accelerate the EWL’s upgrade to a new signalling system by the middle of this year, instead of the year end.

In December, 17 stations on the western segment of the EWL and two North-South Line stations also had shorter weekend operating hours and full-day closures on two Sundays.

In a media briefing on Thursday, SMRT’s director for operations support and resource management, Mr Vincent Gay, said that based on December’s experience, affected commuters had many inquiries about alternative travel arrangements. He hopes these can be better addressed this time round.

In addition to putting more and larger signage at affected stations, Mr Gay said, SMRT wants to increase the “human interaction” with commuters. Hence, it is choosing to deploy more ground staff.

In addition, as many as 300 buses driven by about 600 bus drivers will be deployed to run four shuttle bus routes.

One will ply MRT stations between Pasir Ris and Aljunied, where train services will be available; and another between Tanah Merah and Changi Airport stations.

There will also be a one-way service from Aljunied to MacPherson stations, where commuters can take the Downtown Line or Circle Line.

These shuttle services will run at intervals of between three and five minutes during peak hours, and between five and 10 minutes during off-peak periods.

An express shuttle, operating at intervals of 15 to 18 minutes, will also run in both directions between Changi Airport and Bugis station.

Mr Gay said about one in 10 commuters who take the train from Changi Airport goes to the city, and they can tap the express shuttle.

At Changi Airport, a dedicated shuttle bus pick-up and drop-off area will be set up at Gate 8 of Terminal 3’s Departure Hall. Arriving travellers will be alerted to the MRT closures through television messages played at the baggage claim areas of the four airport terminals.

Signage will also be placed at strategic locations around the airport to direct commuters to the shuttle buses.

Mr Gay said: “In these closures, a lot of inconvenience will be caused to all commuters. We hope that all commuters can plan (their journeys) ahead (of time).”