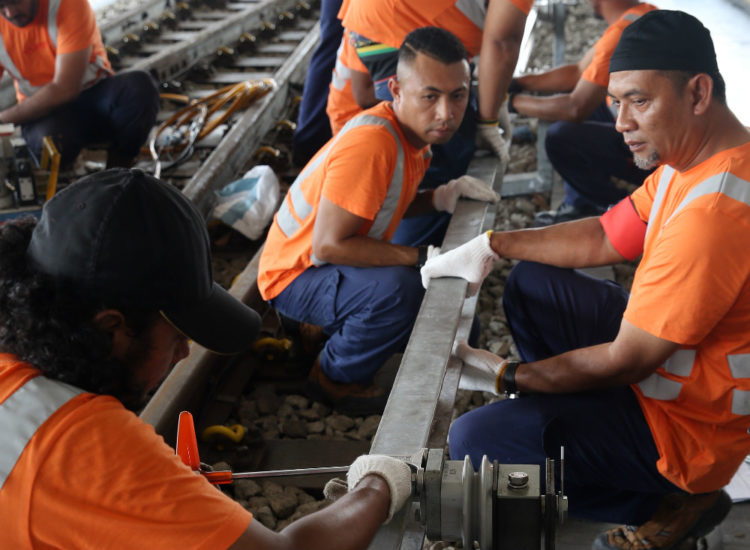 SMRT workers demonstrating the replacement of a high-speed ramp at Bishan Depot on 24 April 2017.

In operation since 1987, the East- West Line (EWL) and the North- South Line (NSL) are the oldest MRT lines in Singapore and in the midst of an overhaul.

But their reliability is uneven.

While the NSL’s reliability has risen by 15 percent, the EWL’s was unchanged for the 12-month period ending March 31 this year.

The reason: Rail upgrading works on the NSL have generally been carried out ahead of the EWL’s.

But operator SMRT is “confident” the EWL will improve in its reliability as its upgrading works catch up with the NSL’s, chief executive Desmond Kuek said yesterday at a briefing on the company’s rail operations. “Our data shows that parts of our network that have been renewed and upgraded are performing well. This gives us confidence… we will see stepped improvements in reliability.”

He also said that in the next few weeks, SMRT will intensify trials of a new signalling system for the NSL by putting in more trains during tests. The EWL is being equipped with the same signalling system, but it has yet to be fully installed for trials to be conducted.

The reliability of trains is measured by what is known in the industry as mean kilometres between failure (MKBF). It refers to the average distance travelled by trains before facing a delay of over five minutes.

The EWL, however, registered an unchanged MKBF of 145,000km.

Trials of the NSL’s new signalling system are being intensified to simulate the train frequency on a typical weekday. The trains will arrive up to two minutes apart, instead of up to three minutes on a typical Sunday, which is when the trials are done.

The tests, which began on April 16, are expected to last two months.

Also, the replacement of the power-supplying third rail for the NSL and the EWL will be finished in “the next one month or so”, said SMRT Trains managing director Lee Ling Wee.

Last year, third-rail problems caused 18 delays that lasted more than five minutes each. Mr Lee said that since 2013, trains have been installed with devices to monitor the alignment of the third rail, so such situations are now resolved within 10 minutes.

Singapore Institute of Technology’s Assistant Professor Zhou Yi said the EWL’s reliability will improve, especially when its new signalling system is ready next year. The new system does not rely much on track circuits and also has a backup in the event of failure, he added.

SMRT has also increased the staff strength in its train department. It now has 5200 employees, an annual rise of 6 percent. It also has more than 400 engineers, almost double the figure of three years ago.