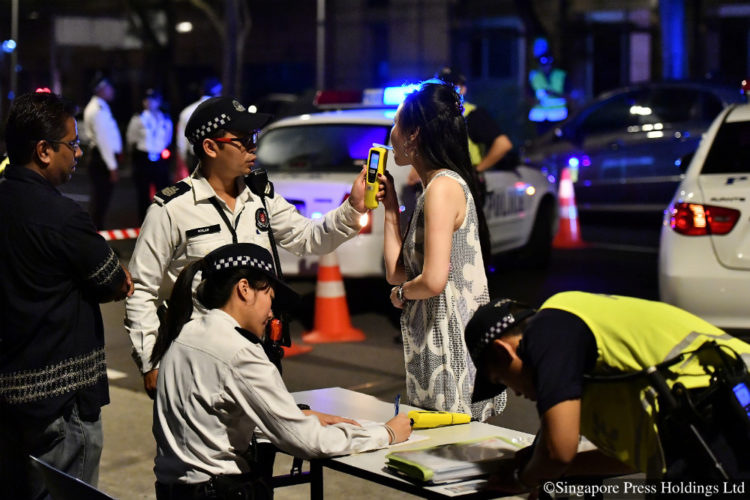 A motorist suspected of drink-driving being tested using a hand-held breath analyser. Police held an islandwide enforcement operation targeting errant motorists from midnight to 3am along Clemenceau Ave opposite Singapore Shopping Centre on 20 October 2016.

Penalties for road traffic offences will be reviewed and stiffened to clamp down on irresponsible motorists, said Senior Minister of State for Home Affairs and National Development, Mr Desmond Lee, on Thursday (Dec 1).

He said the Government “will seek to increase the penalties for offences that result in death or hurt to others” especially in cases where drivers are under the influence of alcohol or drugs, or are repeat offenders.

Speaking at the launch of this year’s SGCarMart anti-drink drive campaign organised by the Traffic Police and Singapore Road Safety Council, Mr Lee added: “We will also press for more severe penalties for such cases. We want these stiffer penalties to serve as a strong deterrent against drink driving.”

Mr Lee said that drink driving remains a concern although the number of arrests, which stood at 1540 motorists from January to September, had dipped by 13 percent compared with the same period last year.

He noted that there were still 103 drink driving related accidents in the first three quarters of the year which resulted in three fatalities and 153 injuries.

Causing the death of another by driving recklessly can draw a jail term of up to five years.

On the upcoming review, deputy commander of the Traffic Police and the assistant commissioner of police Devrajan Bala said: “The penalties for drink driving offences resulting in injuries or death could be enhanced to send a strong signal to those who continue to drink and drive.

“Every motorist must be responsible when they drive on our roads.”

The Straits Times understands that the review is in its preliminary stages and that more details will be released at a later date.

Experts said the review is long overdue and a strong message sent that the intoxicated should not get into the driver’s seat.

Criminal lawyer Amolat Singh said: “The authorities have thus far been very cautious in their approach and did not formulate very harsh penalties straightaway. Despite this calibrated approach, there are still many cases of drink driving.

“I doubt anyone will disagree with these harsher measures because it will make the roads safer for everybody and prevent unnecessary carnage.”

The average annual number of fatal accidents on Singapore’s roads, over the past 11 years till 2015, is 176.

Mr Sitoh Yih Pin, chairman of the Government Parliamentary Committee (GPC) for Transport, told The Straits Times he strongly supports “any efforts aimed at making our roads safer for all Singaporeans”.

He said: “The penalties for drink driving must be sufficient to act as an effective deterrent.”

Mr Lee said the Traffic Police will continue public education programmes; enforce and deter such motorists through stiff penalties; and engage with stakeholders such as entertainment outlet operators.

Some drink-driving tragedies that have made headlines recently include the case of businessman Raymond Chiang Zhi Hao, 29. Chiang’s blood had almost twice the legal ethanol limit for drink driving when he rammed into a stationary taxi on an expressway in March 2015. The taxi driver, who was standing outside his vehicle, died.

Chiang, who had been convicted for drink driving in 2010, was jailed in October for four months, fined $4000 and banned from driving for eight years after pleading guilty to causing death through his negligence and drink driving.

Mr Lee said: “When we think of the harm that has been caused to the victim and his family, and the irresponsible attitude of the driver, it is very clear that we need to take a tougher stance against such acts.”