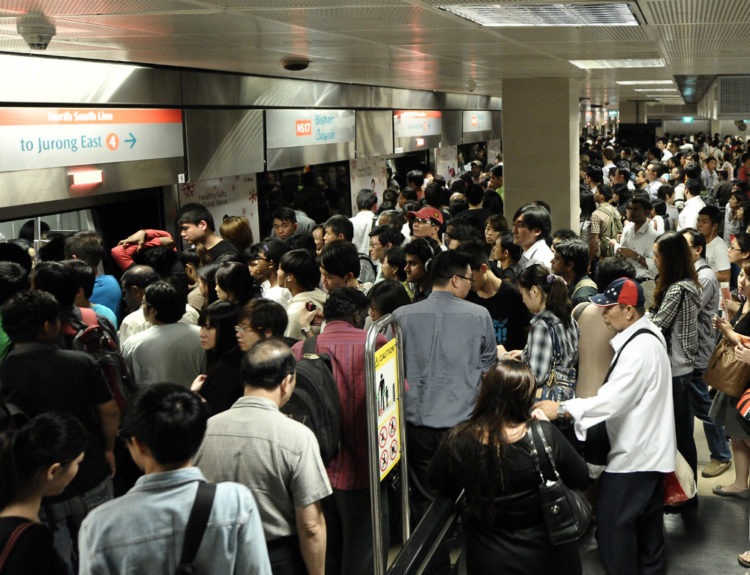 Commuters at Bishan MRT station waiting for trains on Dec 15, 2011, after a massive breakdown of services on the North-South Line.

It had never happened before. On Oct 7, rainwater flooded an MRT tunnel via an opening near Bishan station, submerging the underground tracks – up to waist level, at the deepest.

The first flooding incident on the rail network crippled a large stretch of the North-South Line for more than 20 hours, and affected 250,000 commuters.

Preliminary investigations pinpointed the culprit as faulty float switches, which control the pump system. They are meant to activate pumps when submerged. Sludge and debris were found to have accumulated in the anti-flood storm water pit in Bishan.

Now commuters are aghast at a new wash of dirty water: In a shocking development last week, SMRT revealed that its staff may have doctored pump and tank-system maintenance records on three occasions.

Investigations found that staff did not get access to the tracks or activate the pumps on the stated maintenance dates – meaning those pumps have not been maintained for about a year.

The unprecedented disruption will take centre stage in Parliament today (Nov 7), with 10 MPs from both sides of the House filing a deluge of questions for Transport Minister Khaw Boon Wan to answer.

They are set to ask about the root causes of the flooding, how to prevent a repeat, and whether a Committee of Inquiry (COI) should be called, among other things.

Ahead of the sitting, Insight looks at the possible extent of such lapses, SMRT’s maintenance culture, and what needs to be done.

HOW PERVASIVE IS THE ROT WITHIN IT?
MP Lim Biow Chuan has one main question he wants answered: Did only one team falsify records, or are there more?

“One team didn’t do their part. What is the attitude of the other maintenance teams? Are they really doing their jobs, or just signing off?” asks Mr Lim, who sits on the Government Parliamentary Committee (GPC) for Transport.

Insight understands that an assistant engineer would sign off on records after technicians completed their work. It remains unclear how many levels of management knew about the falsifications, or how widespread the practice is.

Company insiders say the news was received with a mix of shock and betrayal, with staff speculating on why those responsible did it.

A former senior executive from SMRT says, on condition of anonymity: “Obviously, checks have not been done. It’s hard for anyone to say this is just an isolated incident – it’s probably more pervasive than what was reported.”

To urge those who cut corners to own up, SMRT gave its staff an amnesty period till last Friday. It assured them that those who admitted to breaches during that period would not be penalised.

It has since embarked on a massive internal audit – named Operation Osprey – to uncover any other possible lapses. Osprey is the name of a predatory hawk – a sign that the company is determined to hunt down any other potential perpetrators of malpractice.

Insight understands that staff members who admitted to lapses during the amnesty period were from SMRT’s building and facilities department, which oversees areas including flood prevention, tunnel ventilation and fire-protection systems.

When asked how many came forward, SMRT said it was unable to comment beyond the statement it had issued earlier.

National University of Singapore (NUS) transport researcher Lee Der Horng wants to know why the existing system of checks failed to detect the lapses, and why the Land Transport Authority (LTA) – which conducts audits on SMRT – did not catch the breaches either.

He also questions why the staff responsible did not do their work.

A senior staff member within SMRT, who requested anonymity as he was not authorised to speak to the media, points to complacency and the difficulty of obtaining track access for maintenance work as possible reasons. He reckons such breaches are confined to pockets of staff who have been with the company for a long time.

The slots for maintenance works were reduced from the middle of last year because of extensive testing conducted for the new signalling system, he says, noting test trains were run during after-service hours for three nights a week.

No work could be done during those periods as the tracks were “live”, he adds.

The staff maintaining the pumps also had to compete with other teams for track access, including those replacing the power-supplying third rail and those doing urgent work, like repairing defects on the running rail.

They may have decided to sign off on the maintenance records when they could not get access, banking on the fact they would not get found out as the pump system was reliable and had never failed, says the senior staff member.

“Sometimes complacency sets in, and people take risks. It’s upsetting that they took risks so many times,” he says. “The last man on the ground not doing his work – it’s not something we thought could happen. It’s very sad.”