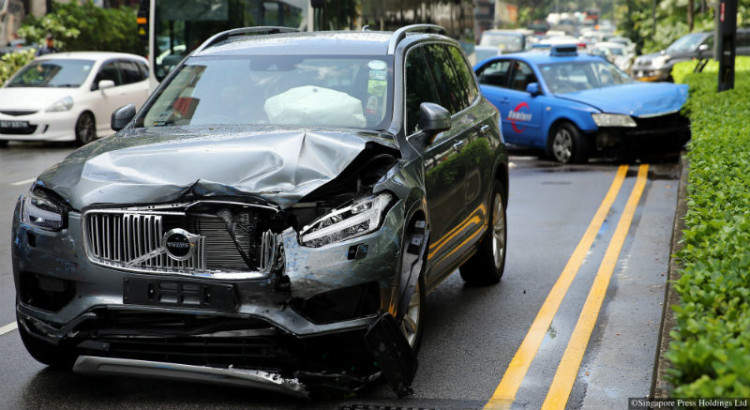 A taxi driver “lost control” of his vehicle, causing an accident which left three people in hospital and a trail of destruction across all eight lanes of Scotts Road yesterday.

Witnesses said the blue ComfortDelGro cab was exiting Claymore Hill beside Shaw House when it barged past a white Toyota Alphard, before hitting a passing Hyundai Avante just before 2pm.

It then crashed through the centre divider and hit a passing dark grey Volvo XC90 on the other side, before coming to a stop against a lamp post in front of Scotts Square.

The impact was so strong that the Volvo’s airbags were deployed.

The taxi driver – thought to be a man in his 60s – was taken to hospital unconscious with a head wound, along with the driver of the Hyundai and a boy understood to have been a passenger in the Volvo.

Mr Jumaat Azhar, 24, who works at the nearby Michael Kors outlet, told The Straits Times: “The taxi driver was completely covered in blood and unconscious. I think he was bleeding from his head.”

He rushed out to help after hearing “a loud bang”. Mr Jumaat added that a man was attending to the taxi driver, so he called 995 before sprinting back into the mall to get an automated external defibrillator kit.

“The accident caused a traffic jam that stretched all the way back beyond what I could see,” he said.

The driver of the seven-seater Toyota Alphard, Mr Hisham Badarun, 47, a driver for a construction company, told The Straits Times he was waiting to filter onto Scotts Road from Claymore Hill when he was struck by the taxi.

“It hit me from behind, then reversed, then moved forward and hit me again, before squeezing past on my left side onto the main road. I think the driver lost control of the vehicle.” Except for “a big shock”, Mr Hisham was fine. His was the only vehicle in which everyone escaped unscathed.

The driver of the silver Hyundai Avante, Mr Rashid Hassim, 32, was heading to his office in Tampines from Ion Orchard.

“It was loud, and my car spun. Now, the left side of my body is in pain, from my chest to my leg,” said the IT support engineer.

The conditions of the taxi driver and boy were not known last night. The Singapore Civil Defence Force sent three ambulances to the scene. Police are investigating.