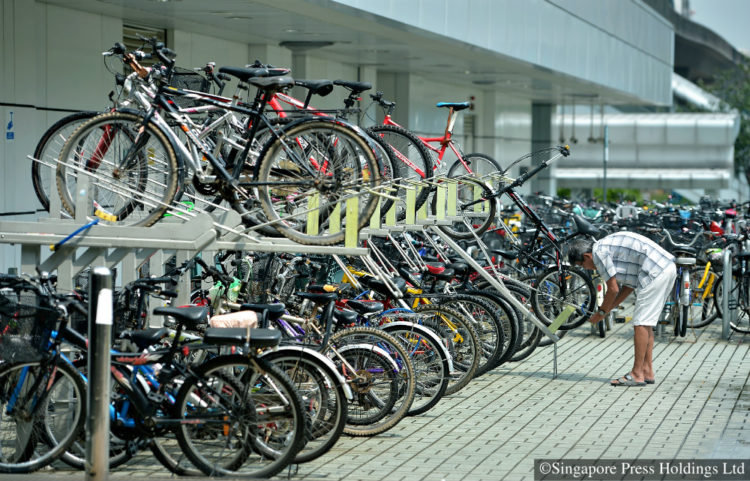 A man securing his bicycle on the bicycle rack at the Sengkang MRT station.

The tender, which was called in July, asked for three proposals, one of which was to operate the pilot scheme in the Jurong Lake District.

The second was to run the scheme in the Marina Bay-City Centre area in addition to the Jurong Lake District, while the third was to implement bike-sharing in both areas as well as Tampines and Pasir Ris.

The winning company will build, maintain and operate 230 bicycle-docking stations in these areas, and maintain 2300 bikes across these stations for eight years.

Users are likely to be able to pay for the service using travel cards, or credit and debit cards, with the revenue going to the operator.

The scheme, expected to begin by the end of next year, is aimed at facilitating cycling and improving first- and last-mile connectivity to key amenities.

“The contract is targeted to be awarded in the first half of 2017,” said the LTA, declining to name the companies that submitted bids.

However, Chinese daily Lianhe Zaobao reported yesterday that the 13 included at least three foreign firms – Velib from Paris, Taipei’s YouBike and Shanghai-based MoBike – all of which currently operate bicycle-sharing programmes in their respective cities.

The tender was supposed to close in September, but was extended because of overwhelming interest in the project.

A separate tender for sponsorship consultants for the project, also called in July, was awarded last month to a consortium made up of French firm Lagardere Sports Asia and SMRT subsidiary The X Collective. They will be responsible for sourcing for sponsors.

In May, The Straits Times reported that the LTA was looking for sponsorship of more than $1 million annually to defray the costs of the scheme.

Mr Francis Chu, co-founder of cycling enthusiast group Love Cycling SG, said the scheme should aim to be low-cost so as to reduce dependency on sponsorship. He said this dependency has resulted in similar programmes elsewhere folding.

More can be done to improve cycling infrastructure here, especially for inexperienced cyclists, said Mr Chu, who operated a bike-share scheme in the one-north business park in 2012.

He said the scheme ended after a year because members felt unsafe cycling on roads in the area.

“Even if people are interested, they might find the roads are too dangerous and the pavements are too narrow,” he said.

Related story: E-bikes are everywhere and drivers must learn to live with them
Related story: Personal mobility devices to be allowed on buses and trains from December