Kids below 12 should be banned from riding e-scooters | Torque
Loading posts... 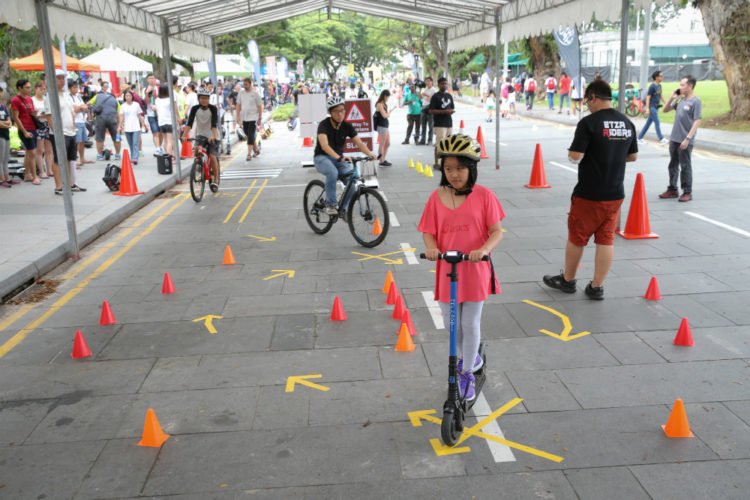 Shaeyna Chin (front) and other participants had a hands-on preview of Land Transport Authority’s (LTA) Safe Riding Programme at a Car-Free Sunday event in the Civic District on 26 February 2017.

I couldn’t believe my eyes as I glanced at my right side mirror; there he was, a primary school boy on his electric scooter.

He not only whizzed past, he even cut in front of me to get to the left side of the road near the pavement!

Didn’t bother him at all when the driver of an oncoming car along the single lane, dual carriageway road horned. Very nonchalantly he rode his scooter into his school premises.

What was he thinking riding so dangerously? And that too at 6.50am when it was still dark and traffic was building up as parents were driving their children to school.

Do his parents know he rides his electric scooter to school and gets onto the road among busy traffic? Do they allow it?

Call me overly protective but as a mother of two teenagers, aged 13 and 15, there is no way I would allow my children to ride personal mobility devices (PMDs) like electric scooters and hoverboards – to school or elsewhere.

As for that boy, I couldn’t help thinking that roads and pavements near schools are just too crowded in the mornings. It’s dangerous not just for those on PMDs but also for other children who are walking.

When I got back home that morning, I immediately rang the boy’s school and spoke to a concerned-sounding woman who assured me that she would deal with the matter. I hope she spoke to the boy and his parents too.

There is a lot of focus on PMDs these days, and rightly so, given their proliferation in the last two years and recent accidents involving users of such devices.

Last November, a 52-year-old man using a PMD died when a double-decker bus hit him in Kaki Bukit. The same month, another man was arrested after a video showing an e-scooter zipping down the Pan-Island Expressway went viral on social media.

On Monday – the first day stiffer rules against errant PMD riders came into effect – 11 riders were caught in Loyang Drive during a joint enforcement operation between the Land Transport Authority (LTA) and the Traffic Police.

Those caught riding on minor roads now face a fine of up to $800 and up to $1000 if caught on major roads. PMD users found riding on expressways will be charged in court. If convicted, they face a maximum penalty of a $2000 fine and a jail term of three months. The maximum fine was previously $500.

It’s ironic that people have to be deterred by stiff fines from doing something that so obviously endanger themselves, such as riding these devices on roads, contending with fast-moving cars, trucks and other vehicles.

The stiffer penalties are useful and timely but there is a limit to resources and it’s impossible for enforcement officers to catch every errant rider intent on braving it out on roads.

More must therefore be done to protect not just pedestrians and other road users, but also PMD riders themselves. This is especially critical for those who are extra vulnerable like the elderly and young children.

A multi-pronged approach is necessary in this case.

The LTA says it intends to roll out a Safe Riding Programme from Feb 1 in schools, community clubs and foreign worker dormitories. Schools and other institutions can sign up for the 90-minute theory and practical programme conducted on a training circuit.

In fact, I think the programme should be compulsory for all schools. LTA and the Education Ministry can work on this.

Second, protect the vulnerable. The other question to ask is whether young children should even be riding PMDs. With such devices easily able to reach speeds of about 20-25km/h, there are good reasons for authorities to consider a ban, say for those 12 years old and below.

Primary schools can start by not letting their students use such devices to get to and from school.

Finally, parents must also play their part. If you insist on buying your children PMDs or they are old enough to buy the devices themselves, make sure you teach them the safety rules.

If possible, set rules on when and where such devices can be used.

As for me, I’m glad my children don’t have PMDs – yet; and I’ve not seen that boy again since he almost gave me a heart attack.