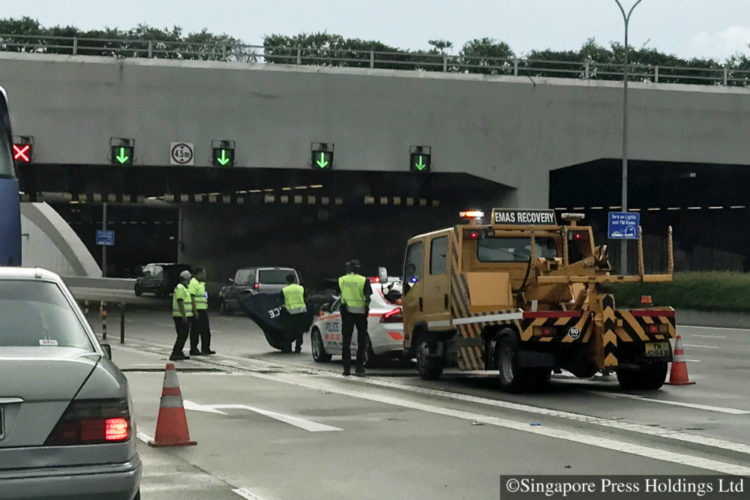 The first involved two off-duty police officers who worked together at the Bukit Timah Neighbourhood Police Centre. It happened on the Marina Coastal Expressway, before the Central Boulevard exit, at around 5.10am.

A 33-year-old male motorcyclist was pronounced dead by paramedics at the scene. The other motorcyclist – a 27-year-old man – suffered injuries, and was arrested for causing death by a negligent act.

A video circulating online showed several vehicles on the leftmost lane, along with emergency vehicles and police officers at the scene. In the video, a police officer can also be seen examining a scrambler motorcycle.

Later that afternoon, an accident on Mandai Road involving a lorry and a black van left two men dead. The Land Transport Authority sent out a tweet at 5.19pm, warning motorists of the accident near the Seletar Expressway junction.

Photos circulating online showed the van, with its front smashed in, behind the lorry on the leftmost lane which was cordoned off with traffic cones.

The Singapore Civil Defence Force said it was alerted to the accident on Mandai Road, towards Yishun, at 4.40pm. “Two men in their 20s were pronounced dead by paramedics at the scene,” said the spokesman.

Police said those dead are the van driver – a 29-year-old male – and a 25-year-old passenger from the lorry.

The Straits Times understands that the passenger had alighted from the lorry and was directing the driver into a nearby construction site when the van crashed into the back of the lorry.

Police investigations into both accidents are ongoing.

The 52-year-old driver of the other vehicle involved was arrested for a negligent act causing the death of Staff Sergeant Nadzrie.