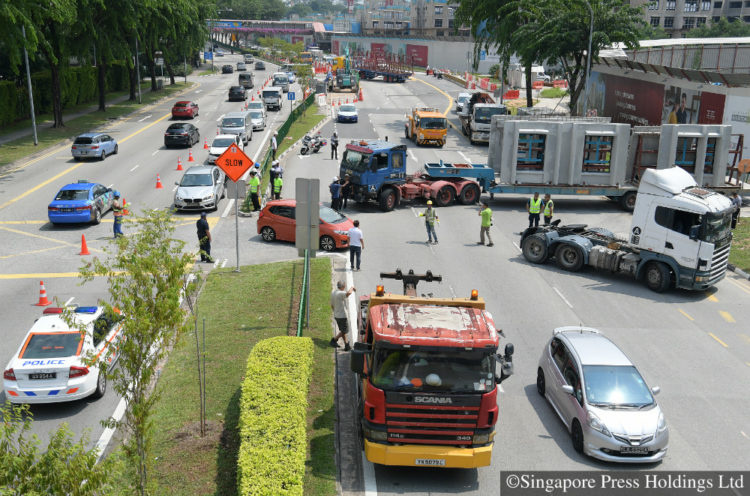 The trailer was sprawled across all four lanes in the direction of Serangoon Road, cutting off traffic completely during the morning rush hour. A road diversion was created using one lane on the opposite side of the road to let vehicles pass. The trailer was removed by 11.30am.

Seven bus services had to be diverted after a large trailer carrying concrete slabs broke down in Upper Serangoon Road yesterday morning as it left a construction site, making the road impassable.

The trailer took up all four lanes heading in the direction of Serangoon Road, causing a massive jam – with commuters posting on social media as early as 9am saying that they had been stuck for at least half an hour.

When The Straits Times arrived on the scene at about 10.30am, police were directing vehicles to a road diversion using a single lane on the opposite side of the major road.

The trailer was towed away by 11.30am, after several concrete slabs were transferred to a lorry.

The Straits Times understands that the trailer had been turning out of a construction site for Build-to-Order project Alkaff Vista into Upper Serangoon Road when it broke down due to a mechanical fault.