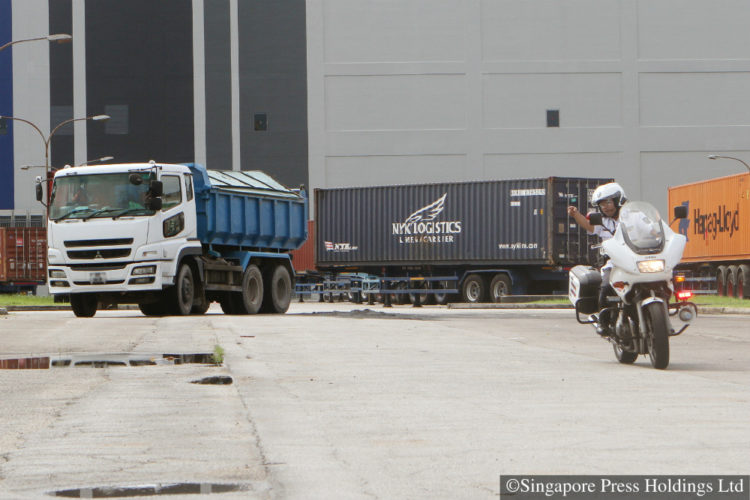 A traffic policeman directing a driver suspected of carrying an overweight load to a spot for inspection yesterday. The blitz by police, LTA and NEA targeted errant drivers after a series of fatal accidents involving heavy vehicles.

For the second time in four days, heavy vehicles were the target of the authorities on the roads – this time in a joint enforcement blitz that zoomed in not only on bad driving behaviour but also on pollution.

Following a Traffic Police operation on Friday, officers from the Land Transport Authority (LTA) and the National Environment Agency (NEA) joined in yesterday’s exercise in the western part of Singapore.

The operations are part of a month-long police-led campaign to clamp down on such drivers after a series of fatal accidents involving heavy vehicles.

Yesterday morning, The Straits Times was invited to watch the authorities in action as they combed major roads and highways. Also on the prowl were LTA and NEA officers on motorcycles.

Less than an hour into the operation, NEA officers spotted a Malaysian-registered truck spewing black smoke.

Using a Hartridge Smoke Meter to measure the opacity of smoke emitted by the Malaysian truck, the vehicle logged an average result of 94 Hartridge Smoke Units (HSU), well above the 40 HSU limit.

The driver was told to turn his vehicle around and was escorted back to the checkpoint by officers.

In the two hours that ST was present, officers pulled over heavy vehicles for offences ranging from faulty reverse lights and illegal modifications to overloading.

In total, 62 summonses were issued against 30 heavy vehicle drivers yesterday for traffic offences such as speeding, failing to keep left on the expressways and using a mobile phone while driving.

There were also 36 LTA offences and one foreign heavy vehicle turned back to Malaysia for excessive smoke emission, said the authorities in a joint media release yesterday.

Adding that LTA takes a serious view of such offences, its spokesman said: “Modifying a vehicle’s engine or exhaust system without due certification and approval can result in inability of the existing vehicle components to handle the increased power or speed. Such modifications may also affect the road-worthiness of the vehicle.”