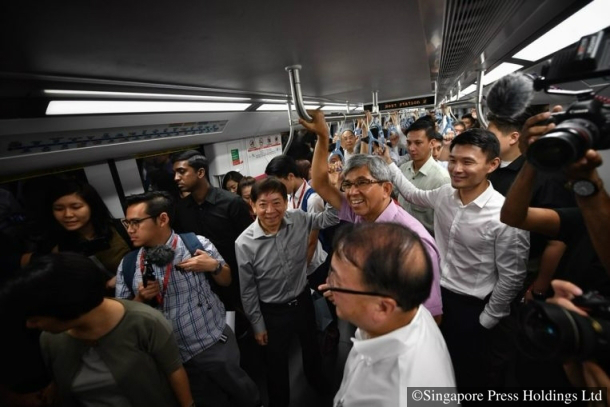 Ministers including Khaw Boon Wan (centre in grey) and Yaacob Ibrahim (centre in purple) taking the train from Expo to Tampines station during the opening of Downtown Line 3.

Transport Minister Khaw Boon Wan said on Friday (Oct 20) that a review of distance-based fare transfer rules will be undertaken to facilitate this.

“As our network becomes denser, MRT stations on different lines will be nearer to each other,” he said at the opening of Downtown Line 3 (DTL3). “In some instances, commuters may save time by exiting one station, walking over to another station, and transferring to another line.

“Our fare structure currently does not provide for such transfers except at three stations, namely Bukit Panjang, Newton and Tampines stations.”

Commuters who do so at other stations now incur a second boarding charge.

Mr Khaw said the Public Transport Council (PTC) will review transfer rules in view of this. “I am sure PTC will examine the issue thoroughly, to ensure fairness to commuters and taxpayers,” he noted.

The map shows the walking time between stations, and should help commuters who decide to do train transfers on foot. It should also help during rail breakdowns. 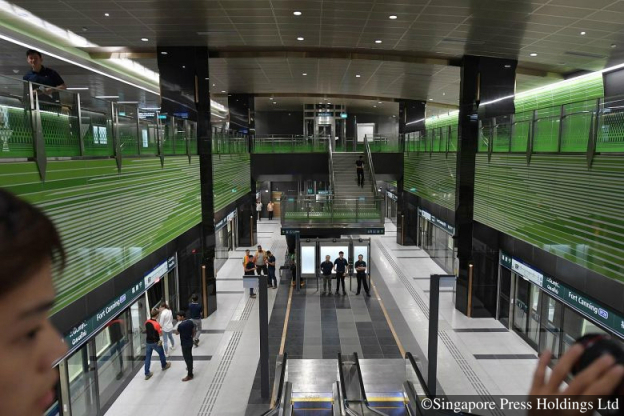 Interior of Fort Canning Station, one of the MRT stations along the Downtown Line 3. The opening of DTL3 marks the completion of the entire 42km Downtown Line, bringing the number of MRT lines in Singapore to five.

In his speech, Mr Khaw also called the DTL3 a game changer for those living in the east.

“For example, a Bedok Reservoir resident working in the Clarke Quay area will find his journey shortened from today one hour to 35 minutes,” he said.

He noted that the opening of DTL3 marks the completion of the entire 42km Downtown Line, bringing the number of MRT lines in Singapore to five.

At the same time, the capacity of older lines is being raised so as to reduce waiting time and crowdedness on trains as well as at station platforms. When the resignalling project on the North-south, East-west lines is completed some time in 2019, trains will be able to run closer to one another.

“This will allow us to add up to six more train trips every hour during peak periods,” the minister noted. “To do this, we have bought 57 new trains. Most of these new trains are already here.”

More rail projects are in the pipeline too. The first three stations on the Thomson-East Coast Line will open in 2019. The North-east Line extension will open in 2023, followed by the Jurong Region Line and Circle Line Stage 6 around 2025.

The Cross Island Line – the next major heavy rail project – will be up by around 2030.

By then, Singapore would have achieved its goal of eight in 10 households being within a 10-minute walk of a train station, said Mr Khaw.