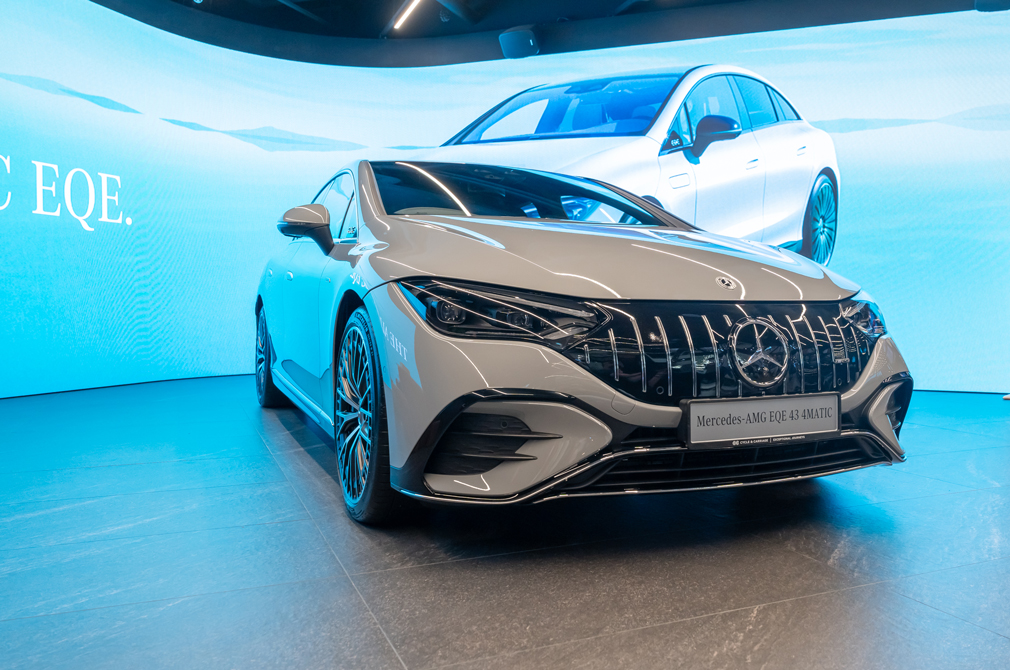 Mercedes-Benz Singapore has officially launched the EQE, the brand’s electric saloon and its second model to be built fully electric from the ground up.

And if the sedan looks familiar, that’s because it’s a smaller version of Mercedes’ flagship EQS. Like it, the EQE is also underpinned by the carmaker’s EVA2 platform.

Though the EQE resembles the EQS, a couple of visual cues enable it to stand apart.

Apart from being shorter, the EQE does not come with the LED light band running across the front grille. And because of the headlights’ position, the grille itself has a different shape from the hexagonal one on the EQS. In addition, the EQE also has a conventional sedan body style, unlike the fastback EQS. Boot capacity here is 430 litres.

That said, the EQE still retains the single light band at the rear, and the tail-lights feature a 3D helix design. The “one-bow” silhouette and cab-forward stance are very apparent, too. 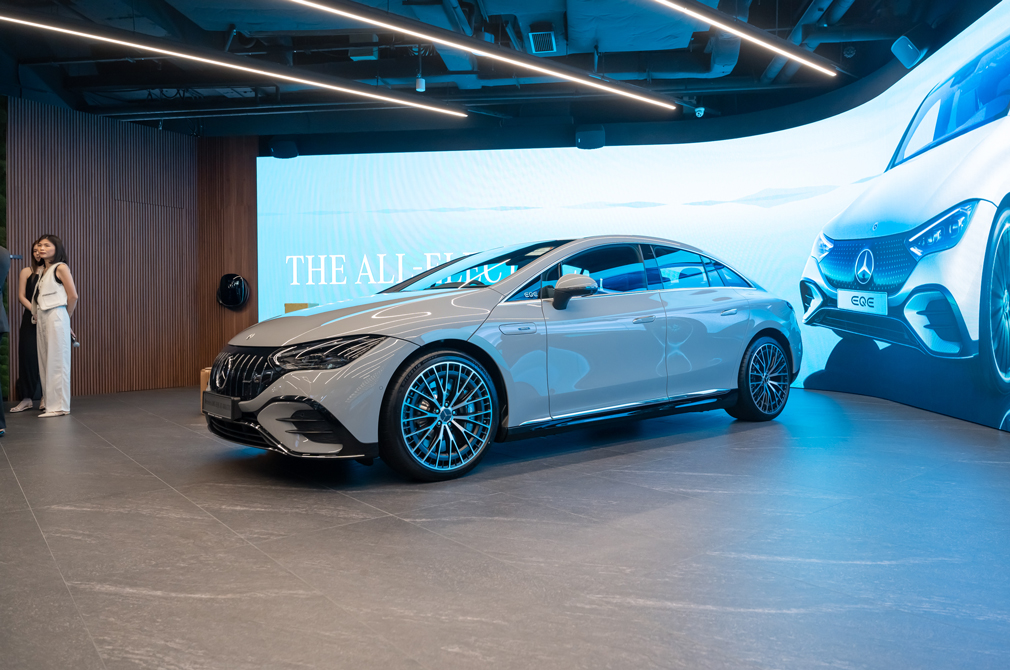 However, the design similarities are apparent, including the single light band at the rear (featuring a 3D helix design), flushed door handles, and most notably, the sedan’s ‘one-bow’ silhouette and cab-forward stance.

The cab-forward stance maximises space between the A and C-pillars. For comparison, the EQE’s 3120mm wheelbase is more than 18cm longer than that of the E-Class, despite the electric sedan being just 3cm longer in overall length.

Two variants are currently offered: the EQE350+ AMG Line and the EQE43 AMG 4Matic. Both are powered by a 90.56kWh battery, and support AC charging at up to 11kW, and DC charging at up to 170kW. The latter will see recharging from 10 to 80% completed in under half an hour.

The 350+’s single-motor, rear-wheel-drive set-up is optimised more towards efficiency. Consequently, the sedan manages 669km of range (WLTP-rated) on a single charge.

Performance-wise, the single motor gives it 288bhp and 565Nm of torque, and a zero to 100km/h time of 6.4 seconds. Rear-wheel-steering at up to 10 degrees is standard, promising smaller turning circles at low speeds and improved stability at high speeds. 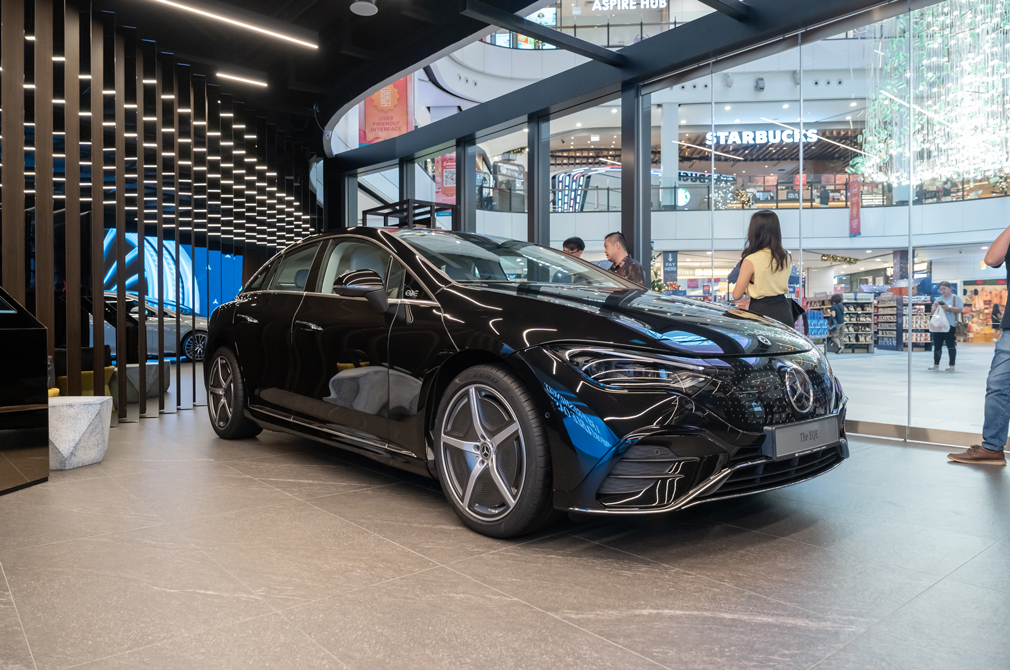 Inside, a 12.8-inch portrait oriented touchscreen display takes centre stage on the inside, while the driver also gets a 12.3-inch digital display, which are both run by the MBUX infotainment system.

The EQE43 AMG 4Matic is aimed at keener drivers. Instead of one motor, this hotter version has two that can unleash 469bhp (in Sport+ mode) and 880Nm of torque. With all-wheel-drive, it’ll rocket from rest to 100km/h in 4.2 seconds, and given enough (unrestricted) road, top out at 210km/h.

However, since this extra performance is squeezed from the same battery, the range drops from 669km to 534km. To recover energy, three-levels of regenerative braking are offered. Merc claims that the highest level of recuperation power can reach 260kW.

As the range-topping variant, the EQE43 is equipped with the MBUX Hyperscreen, an expansive display that actually houses three screens: two 12.3-inch displays for the driver and front passenger, and a central 17.1-inch screen.

AMG accents are evident all around the cabin – on the front seats, centre console, and the twin-spoke AMG Performance steering wheel. 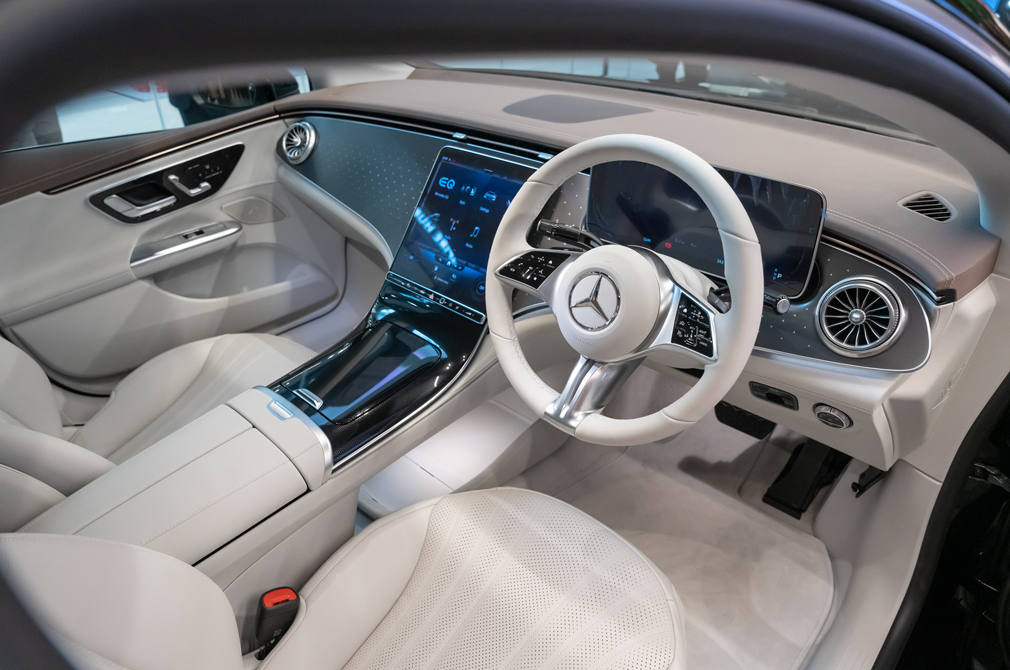 Accompanying the launch was a special look at an upcycled Christmas tree hanging right outside the Concept Store in Great World. Named “Stars of Change”, the installation is made from old parts from Mercedes-Benz cars (like seatbelt buckles and badges), materials from previous art pieces, and recycled bottles.

Stand beneath it and you’ll notice a glowing three-pointed star.

Buyers seeking even greater performance can expect the arrival of the EQE53 next year. A Mercedes spokesperson also hinted that the all-new SL might make an appearance at the 2023 Singapore Motorshow. 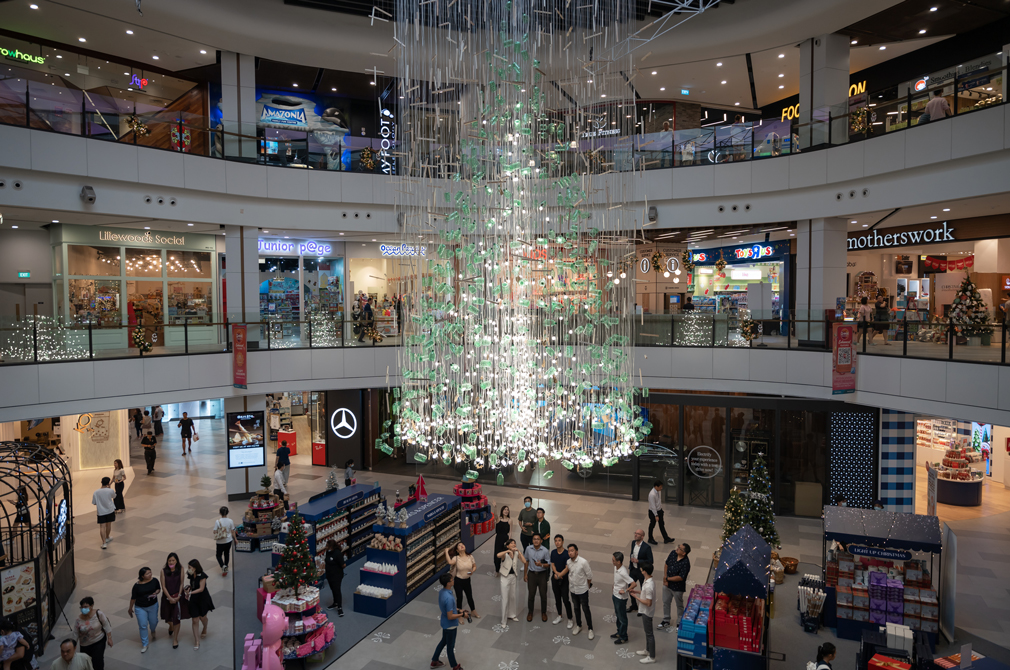