UberFlash, a new service available on the Uber app, pools Uber’s private-hire cars and taxis from ComfortDelGro. Commuters are matched with the nearest ride.

Commuters making use of UberFlash, the new service pooling Uber’s private-hire cars and ComfortDelGro’s taxis, would have found rides that showed up quickly, but were not necessarily cheaper than other taxi or ride-hailing services.

While promising cheaper and faster rides, UberFlash – a service on the Uber app that matches commuters with the nearest Uber private-hire car or ComfortDelGro taxi – uses surge pricing, in which prices rise during periods of high demand.

In a comparison by The Straits Times of various ride-hailing options at different times yesterday, waiting times between the different services were comparable.

However, UberFlash did not always come out on top for price.

Due to surge pricing, a trip from Punggol to Raffles Place cost $32.30 on UberFlash at 9am in the morning peak, cheaper than the ride-hailing service’s UberX platform, which cost $33.91 in the same period.

But it was more expensive than a ride on JustGrab – which like UberFlash allocates the nearest taxi or private-hire car to customers – which was priced at $26 and did not indicate higher demand at the time.

ComfortDelGro’s own fixed fare, which does not fluctuate based on demand, was $27.50. The same trip using a metered taxi cost $27.95. 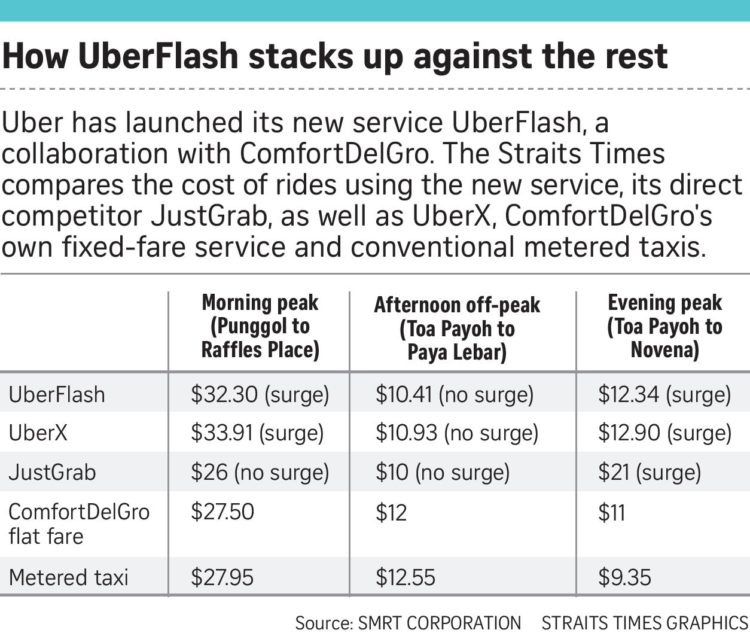 The evening peak coincided with a rainy spell, which tends to increase demand and thus prices.

A trip from Toa Payoh to Novena at the time cost $12.34 using UberFlash, compared to $21 on JustGrab and only $9.35 using a metered taxi.

“We have no assurance that two commuters travelling the same journey at the same time would pay the same price,” he said, suggesting the authorities impose regulations requiring private-hire car firms to reveal their pricing framework to ensure commuters are not being taken advantage of.

National University of Singapore transport lecturer Lee Der Horng said the Uber-ComfortDelGro alliance, and the tie-up between Grab and the other taxi firms, had effectively created a duopoly in the point-to-point transportation sector, but felt this could benefit consumers.

“Neither will want to give away their market share, so this is likely to mean cheaper prices and more incentives for riders.”

Commuters were hopeful UberFlash would mean less waiting time for a cab, especially in peak periods.

Regular Uber rider Mike Unger said it might now be more difficult to get a metered taxi during the peak, but felt UberFlash would on the whole be good for commuters.

“It will make it easier to get a ride,” said the 26-year-old investor.