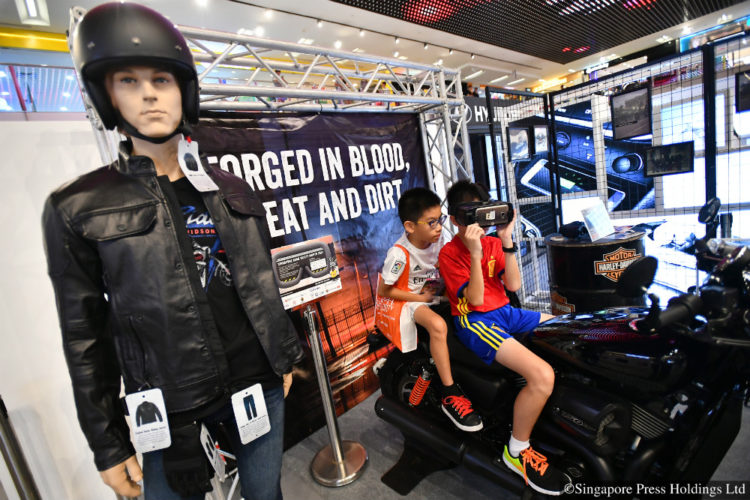 Jayden Koh trying out the virtual reality technology at the Road Sensibility booth by Harley-Davidson for motorcyclists with his brother Joshua watching on, at the launch of the Singapore Road Safety Month at NEX on 26 May 2017.

By next year, school trips to the Road Safety Community Park in East Coast Park will include a virtual reality (VR) experience to simulate crossing the road, complete with 360-degree videos and an interactive game.

The VR experience for children was unveiled at the launch of the fifth Singapore Road Safety Month yesterday, alongside two VR titles for motorists and motorcyclists to brush up on road safety at driving centres.

They were developed by the Traffic Police and Singapore Road Safety Council (SRSC) in partnership with the Infocomm Media Development Authority (IMDA), tech giant Samsung and Harley-Davidson.

Mr Adrian Lim, IMDA director of the sectoral innovation group in education, said that VR offers a safe and controlled environment to teach road safety, since “it’s impossible to bring 40 kids to the roadside to show them how to cross the road”.

But with the VR technology, he said, they would be better able to understand concepts such as the blind spots of heavy vehicle drivers.

Meanwhile, the Road Sensibility VR experience guides motorcyclists in practising safe riding behaviour, while Eyes On The Road puts users in the seat of a driver who gets distracted by his electronic device and is killed in an accident.

They will both be made available at driving centres here by next year.

The VR experiences complement two new posters which warn pedestrians and motorists not to use phones and other electronic devices when crossing roads or driving.

Home Affairs and Health Parliamentary Secretary Amrin Amin said: “Our efforts to improve road safety have to go beyond infrastructure enhancements like school zones or Silver Zones, and beyond ensuring that drivers keep to speed limits and obey traffic rules.”

He said efforts must also include outreach to three groups identified as particularly vulnerable on the roads – motorcyclists, elderly pedestrians and children.

He added: “Eventually, when it (VR) is useful, we will have it for the elderly as well.”

Last year, 62 motorcyclists and pillion riders were killed, and more than 5000 were injured, while accidents involving elderly pedestrians numbered 268 last year, up from 224 previously. In all, there were 141 deaths on the roads and 8277 accidents with injuries.