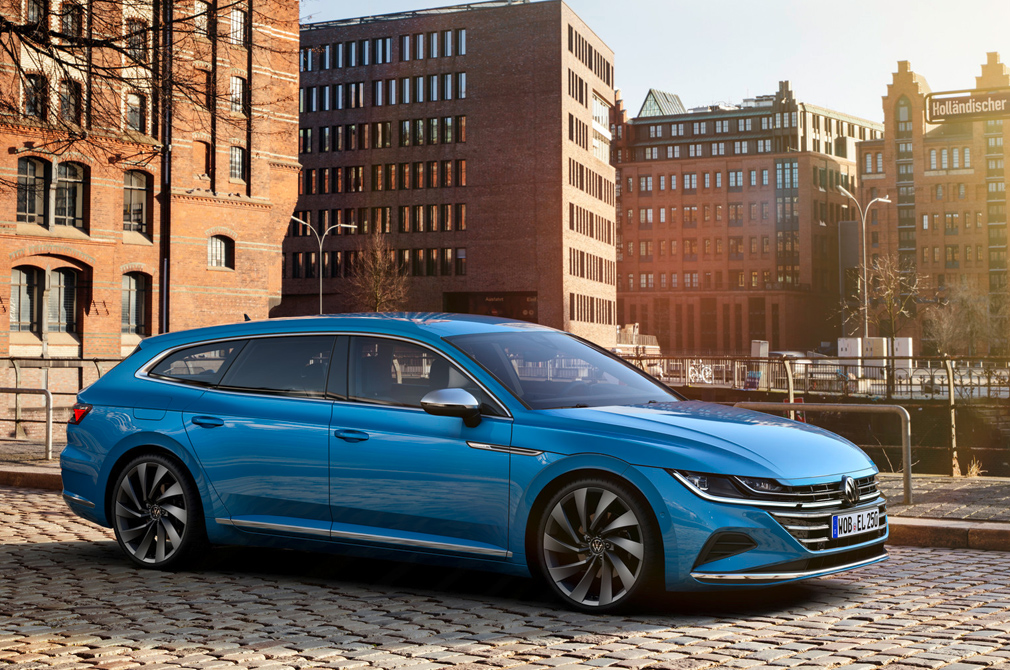 The new Volkswagen Arteon has made its world premiere, and is now available as a Shooting Brake.

At the front of the refreshed Arteon sits a long, wide hood that stretches across the entire front profile to the wheel arches to form the shoulder section.

An illuminated grille is now available as an added option. New LED daytime driving lights also now connect to a central light bar in the grille. 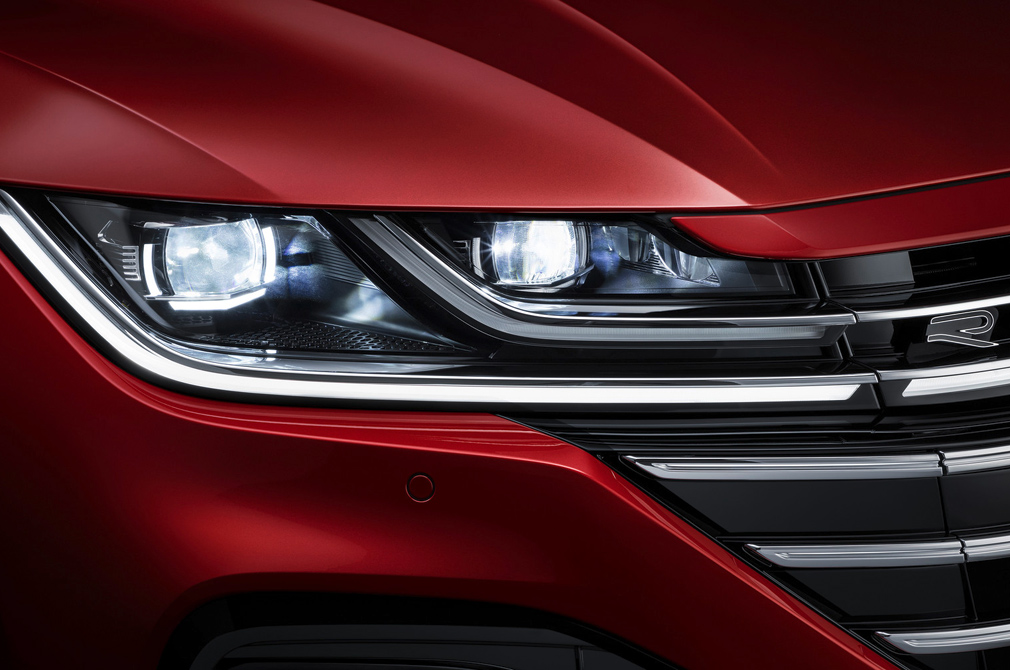 LED driving lights now line up with light bar in the grille.

At the rear, the Volkswagen badge and Arteon lettering have also been redesigned. On the fastback model, the roof and window contours here are swept down in parallel from the B-pillars to form the coupe-shaped rear.

The Volkswagen Arteon Shooting Brake offers 565 litres of boot capacity, which expands to 1,632 litres when the rear seats are folded. The equivalent figures for the Sportback are 563 litres and 1,557 litres. 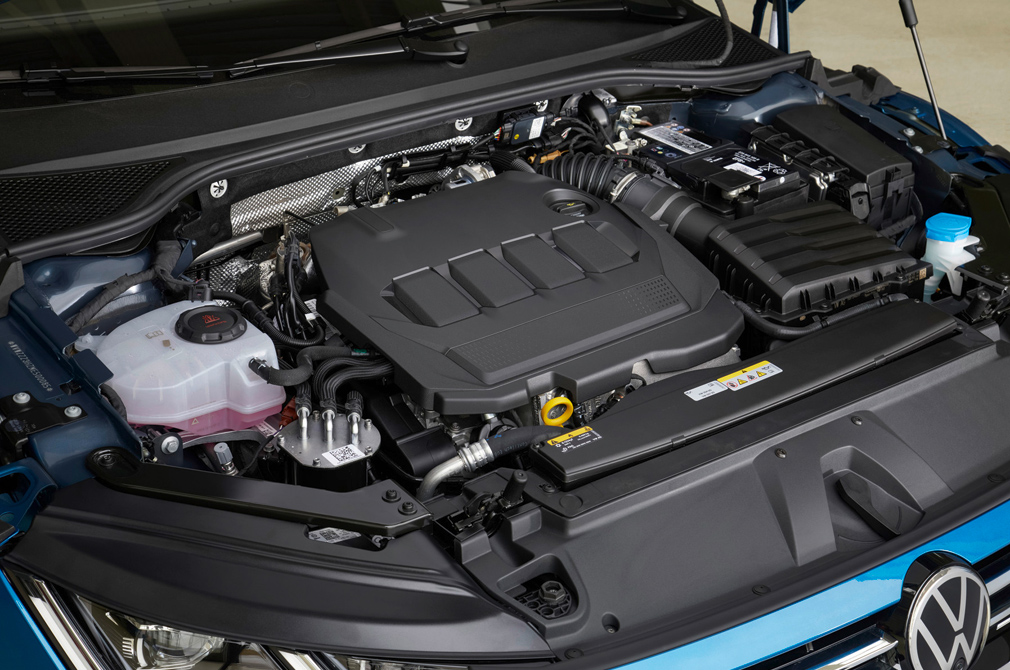 2-litre TSI engine is confirmed for U.S.A, while Europe will get additional plug-in hybrid options.

A turbocharged 2-litre and direct-injection TSI engine has been confirmed for the US.

This powerplant produces 264bhp and 350Nm of torque, with power taken to the front wheels via a standard 8-speed automatic transmission.

European markets meanwhile, will also get a plug-in hybrid that delivering 215bhp, and a Volkswagen R-developed powertrain with 315bhp.

An R-Performance torque vectoring system has also been confirmed for the Arteon R. It will distribute torque variably both between the axles and also between the rear wheels depending on the driving situation. 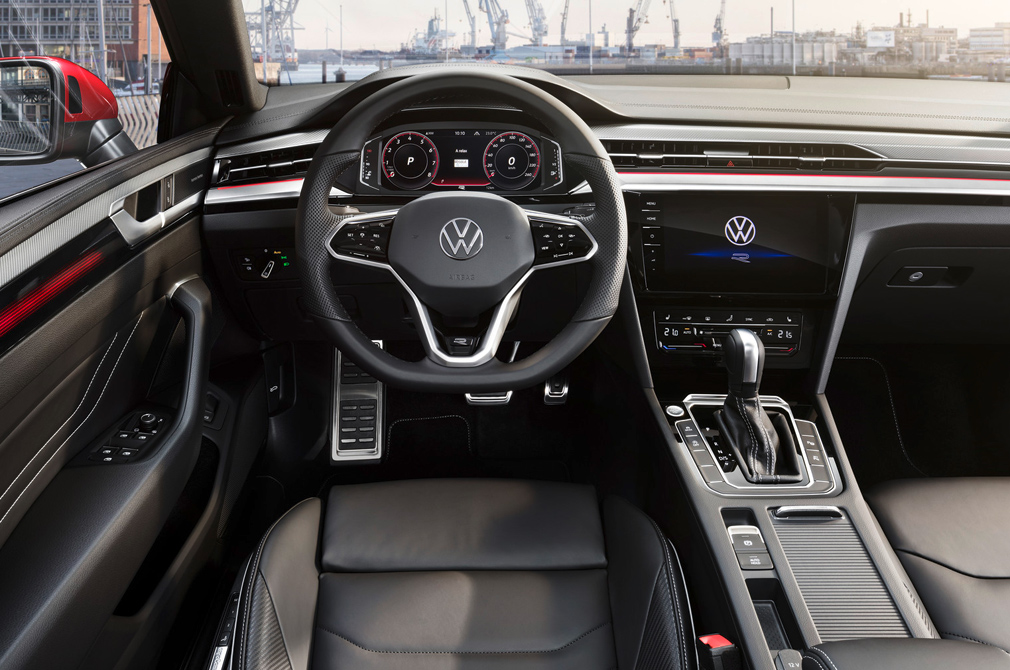 Redesigned cockpit and new multi-function steering wheel for the interior.

Inside, the Volkswagen Arteon has been equipped with a redesigned cockpit that has been refined to match the model’s exclusive nature.

The fabrics and leather in the vehicle interior have been upgraded. At the top of the dashboard, new leatherette surfaces stand out with new decorative seams.

A new multi-function steering wheel now features touch-sensitive surfaces. These aid in detecting if the driver has his hand on the steering wheel for use with the Travel Assist driver assistance function.

Occupants can set and adjust the temperature inside the Volkswagen Arteon using an intuitive touch slider in the optional three-zone Climatronic system. The slider can also be used to operate the blower function in manual mode. 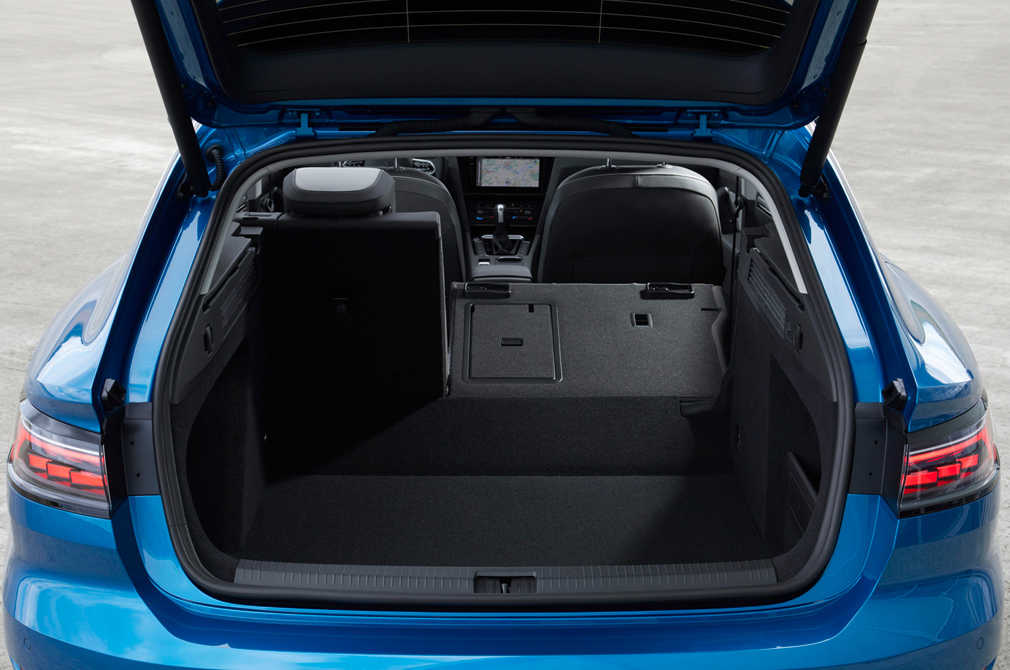 You get 565 litres of boot capacity, which expands to 1,632 litres with the seats folded in the Arteon Shooting Brake.

The new Volkswagen Arteon is equipped with the Volkswagen Digital Cockpit, which allows the driver to configure the 10.25-inch instrument display. US-bound models now adopt the all new MIB3 infotainment system, delivering as standard the 8.0-inch Discover Media system with navigation. Volkswagen is also offering a newly developed, high-end sound system made by audio specialists harman/kardon for the very first time in the new Arteon. The system uses a 700W, 16-channel Ethernet amplifier to power 12 high-performance loudspeakers.

One loudspeaker acts as the centre speaker in the newly designed dash panel, while another operates as a subwoofer in the trunk. The remaining treble, mid-range, and bass loudspeakers have been arranged in the doors.

Read our review of Volkswagen’s other flagship, the Touareg SUV, here.
Click here for our review of the VW Arteon
The Volkswagen Arteon takes on the Kia Stinger and Opel Insignia Grand Sport here