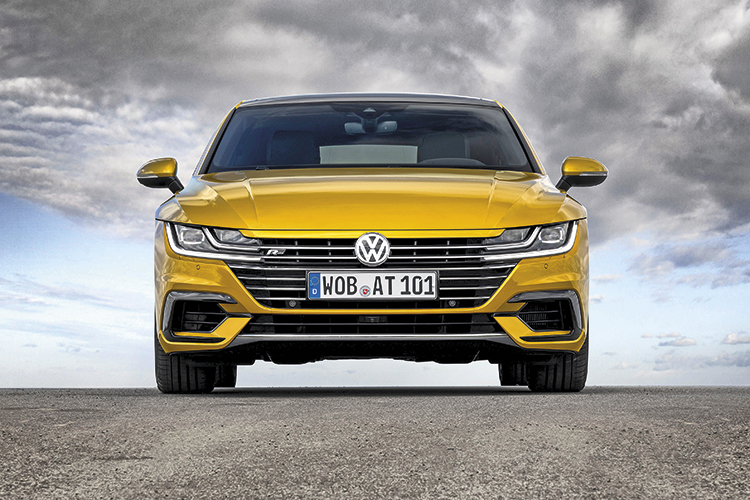 No one will look at the Arteon and think it’s a Passat derivative, especially with that all-new grille design.

Now that the Phaeton is no more, there has not been a Volkswagen saloon that could take on the role of flagship.

Since the end of Phaeton production, the Passat has been the top model in the VW lineup. The CC was essentially a re-bodied and more stylish Passat, and that model, too, has come to the end of its production run.

So the task of carrying the VW flag has been bestowed on the new Arteon. As far as I know, the name has no meaning in any language, but the “Art” in the first syllable is meant to be of significance. 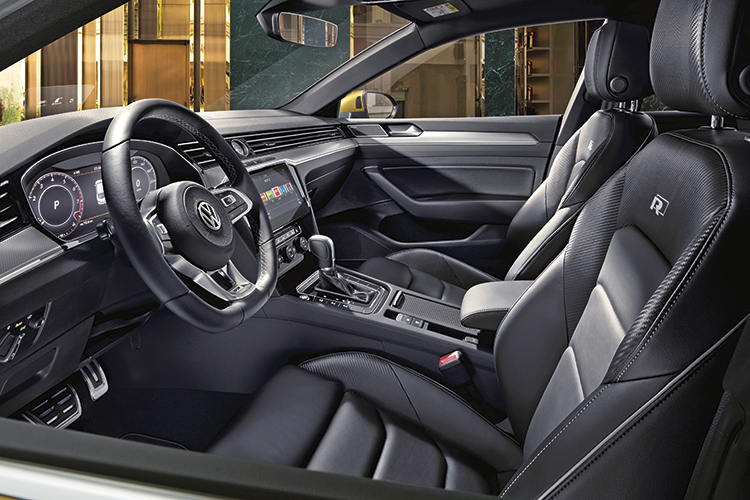 No one can deny that the Arteon has been styled with artistic flair. It is undeniably attractive in profile and, in my opinion, the finest-looking coupe with more than two doors.

Although in essence a replacement for the CC, the Arteon’s styling is a huge step above the Passat-derivative. It is also a bigger car, with a 50mm longer wheelbase built on the ubiquitous (to the VW Group) MQB platform.

Unlike the CC, the Arteon has a fifth door (the tailgate), which helps with its decidedly coupe-ish styling. Its design identity is further emphasised by a dramatically expressive grille that almost occupies the entire width of the car’s front. 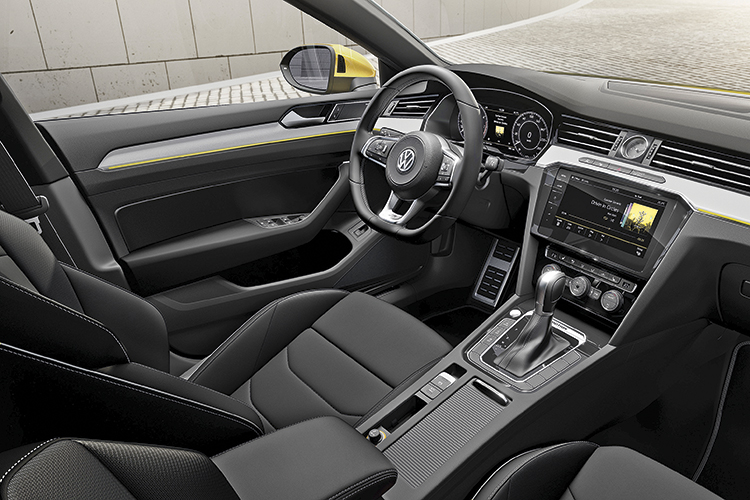 Passat-based cockpit of the Arteon is less artistic than the exterior.

Three years ago at the 2015 Geneva Motor Show, Volkswagen presented the Sport Coupe Concept GTE, which was transformed into the Arteon with remarkably few changes, apart from the slim add-on lip at the leading edge of the bonnet – a design tweak dictated by production requirements.

It’s a bit of a pity, because the concept car’s one-piece bonnet was cleanly integrated. Mass production, however, is about a lot more than looking good. The product must be easy and economical to manufacture.

Nonetheless, the Arteon has absolutely nothing to be ashamed about. It is a sleek and beautiful five-door coupe which is distinguishable from other cars of similar shape. 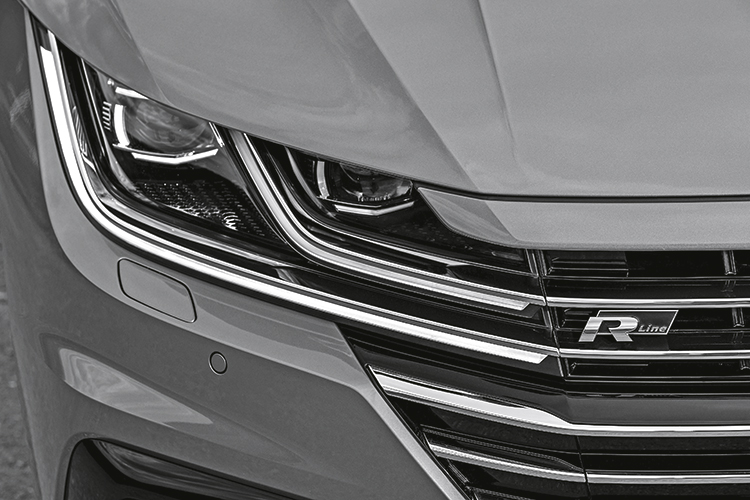 LED headlights incorporate thin light-strips that extend the grille’s slats, and the clamshell-type bonnet is so low that you wonder how they squeezed the engine in. To my eyes at least, the Arteon is more attractive than the Audi A5, BMW 6 Series Gran Coupe and Mercedes-Benz CLS. And compared to its closest rivals, the Arteon has interior space that beats them all, particularly for luggage and the legs of backseat passengers.

The artistic style of the bodywork, however, doesn’t quite extend to the cabin.

Yes, the dashboard layout and the passenger compartment are extremely well-built and smart, but their stark similarity to the Passat is mildly disappointing. 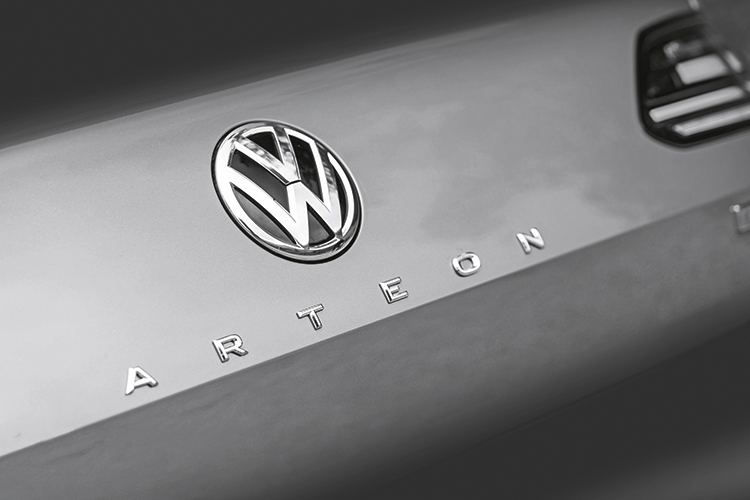 Not that the Passat’s interior is anything to grouse about, but the Arteon’s cockpit and cabin should have been more stylistic and unique.

Like all VW cars today, the ergonomics is first-class. The Arteon’s instruments are fully digital, while the central touchscreen and infotainment system are the latest versions.

There is now a gesture control feature, which admittedly does not work so well with the left hand if you are right-handed. The buttons and knobs, like those in any VW, work perfectly fine without having to wave your fingers. A welcome addition is a head-up screen that can display essential driving and navigation information, depending on the menu selected by the driver. 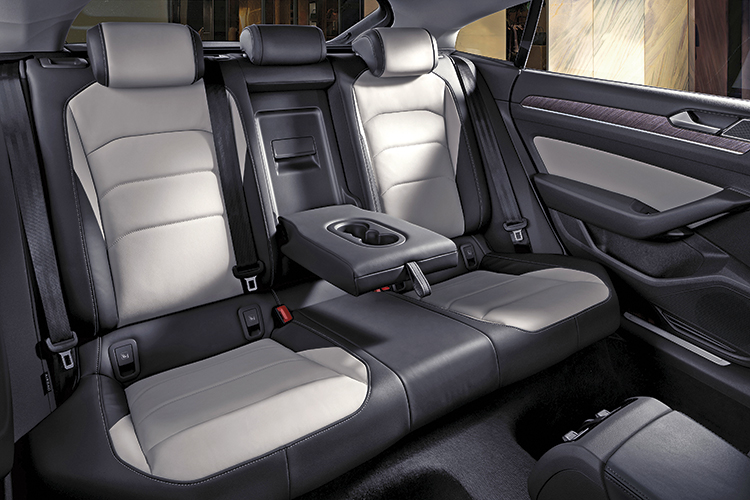 Arteon’s contoured backseats provide more than a metre of legroom.

Volkswagen introduced the Arteon with two versions of the company’s 2-litre 4-cylinder. Both are turbocharged, but one is a TSI (petrol) and the other a TDI (diesel). Although other engine choices will be made available later, including a 1.5-litre 150hp unit with cylinder deactivation, I sample only the most powerful variants of the Arteon.

The TDI is a sequential bi-turbo diesel motor which has 240hp and is possibly the most powerful 2-litre diesel engine anywhere. Even more startling is its 500Nm of torque, which stays constant between 1750 and 2000rpm.

It does zero to 100km/h in 6.5 seconds, but that says nothing about its relentless and effortless urge, even when accelerating from beyond 150km/h. 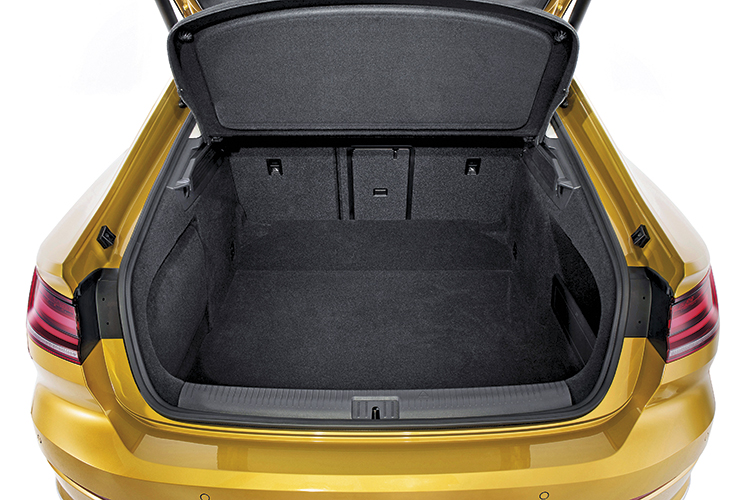 After the TDI Arteon, the petrol 2-litre TSI doesn’t quite feel as explosive, which is not surprising since it has just 350Nm of torque (between 1700 and 5600rpm).But the TSI does have a higher rev limit, which is why in a standing-start shoot-out to 100km/h, the petrol-powered Arteon is almost a second quicker. Top speed for the TSI version is an electronically governed 250km/h, while the TDI version tops off at 245km/h.

In any case, it would be the TSI Arteon destined for Singapore. My test car is the top-spec R-Line with VW’s 4Motion four-wheel-drive system. As in all variants of the Arteon, the transmission is the excellent 7-speed DSG, which shifts gears seamlessly, whether up or down the ratios.

No doubt, the gearbox adds to the car’s sporty character, especially when accelerating fast, during which there is barely any drop in thrust during upshifts. 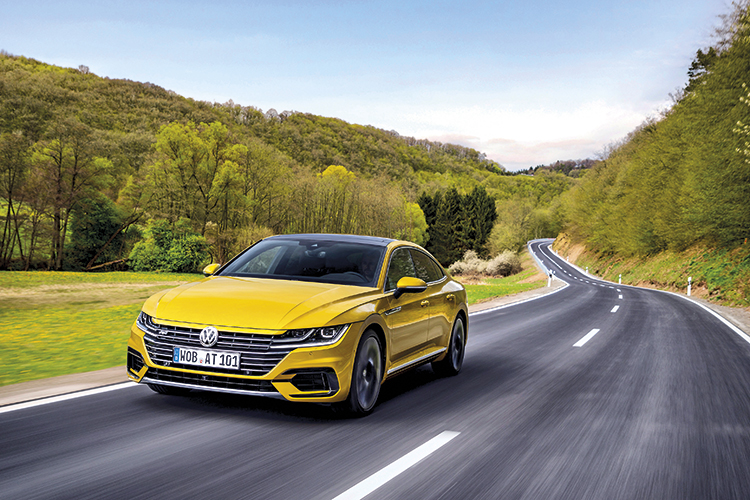 Refinement is another key element in the Arteon, which is why Volkswagen resisted the temptation to tune the exhaust note for a more extrovert sound.

Also part of the car’s specification is ACC (Adaptive Cruise Control), which uses imaging and radar to control the speed and even override the preset limit. ACC can slow the Arteon down and stop it when the traffic comes to a halt, and then move off following the vehicle in front. The system also reads speed limit signs and uses past sat-nav data to cruise within the road’s speed limit.

With the R-Line specification, the Arteon also gets electronically controlled adjustable dampers that can be set to Comfort, Normal or Sport, with the facility to vary in-between the three driving modes using the Individual setting via the touchscreen. 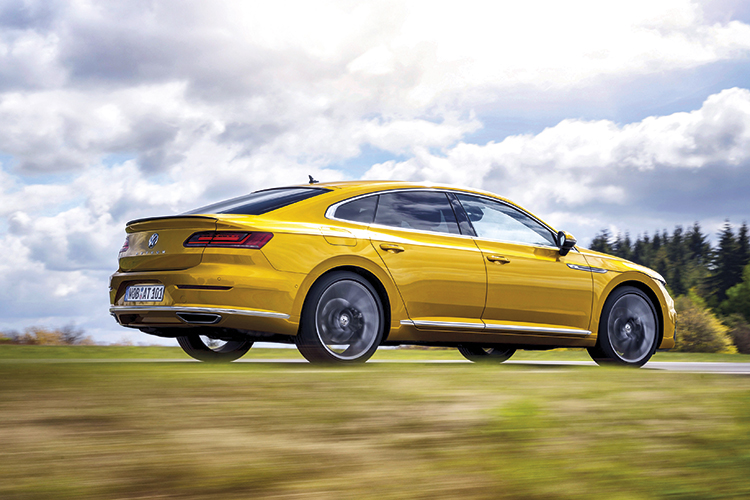 Not as easy as it sounds when you are driving and simultaneously trying to move the virtual slider horizontally along its scale. A knurled wheel or a dial on the centre console would have worked better.

The Sport mode, in any case, seems to suit the car perfectly. The ride does get noticeably firmer, but stays compliant on most road surfaces. Being a very low and wide car, the Arteon always feels planted to the tarmac and exhibits very little roll in cornering. Good steering feel adds to the car’s confidence-inspiring dynamic behaviour. Overall, the handling and comfort levels in the car are above average and in keeping with its grand tourer image.

No one will look at the Arteon and think it’s a Passat derivative, especially with that all-new grille design. Its five-door coupe styling is far removed from the traditional form of a saloon and it is, in fact, even sleeker than the CC. I look forward to driving the 1.5-litre entry-level version and, perhaps some time later, the Arteon R. 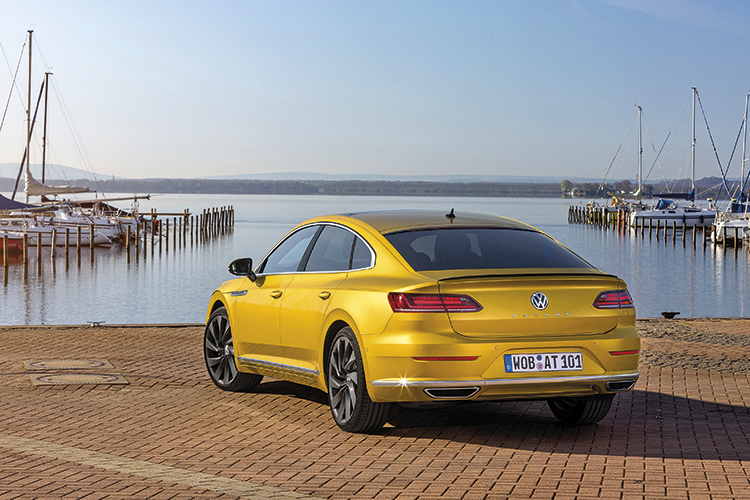 To the reviewer, the VW Arteon is more attractive than the Audi A5, BMW 6 Series Gran Coupe and Mercedes-Benz CLS.

Check out the Volkswagen Arteon

Volkswagen Arteon is a fancy and fast German fastback