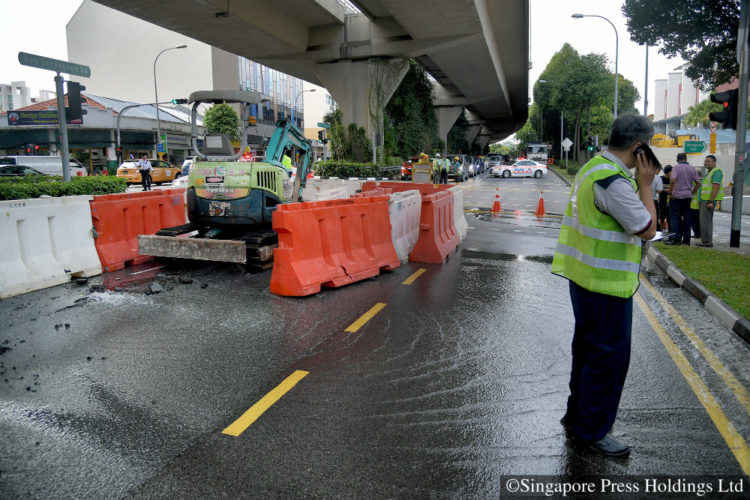 Repair works are under way after a pipe burst in Upper Serangoon Road towards Sengkang and Hougang early Monday (Oct 30) morning, national water agency PUB said on its Facebook page.

It said at 8.31am that two out of three lanes were closed, and that motorists were advised to consider alternate routes.

It had earlier posted at 5.05am that all lanes were closed. However, the leftmost lane has since been opened.

A statement posted later at 11.38am said: “PUB received a report on a pipe leak at Upper Serangoon Road around 2am on Monday, and immediately sent our service crew and contractors to the site.”

It explained that the leak was isolated at 8.45am, and that water supply to customers was not affected.

“Repairs are expected to complete by today (Oct 30),” it added.

Bus operator SBS Transit also sent out tweets at around 6.20am informing commuters of bus service diversions in Upper Serangoon Road due to urgent road works.

It later tweeted that normal bus services had resumed at 7.51am.

When The Straits Times arrived at the scene at 7.25am, there were cracks visible on the road, with water streaming out of them. 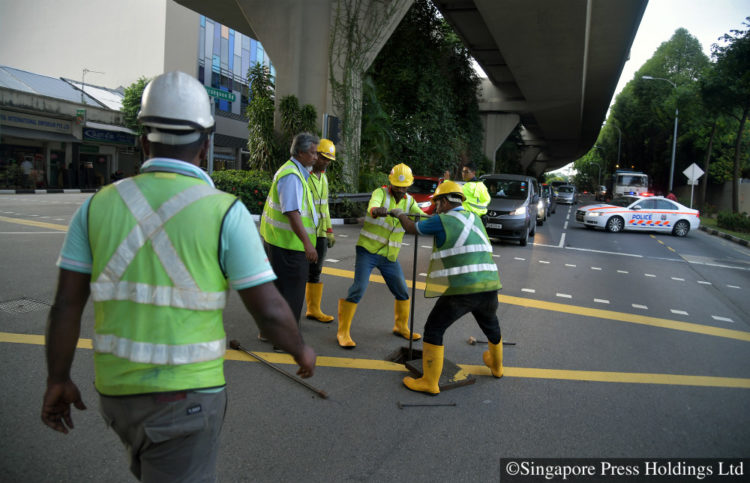 Chiropractor Will Kalla, 41, who was about 150m from the affected junction, said: “I knew something was wrong because there were no cars on the road. All I could see in the distance was just water and police cars and some PUB staff.”

He was waiting with his three-year-old daughter for her school bus to Marymount Kindergarten which usually arrives at 7.20am.

“We waited for 15 minutes, before my wife called the driver. He said he could not get to where we were. So we had to walk about 500m through the housing estate to get to Bartley Road where he was waiting.”

Mr James Wee, 34, whose son attends a nearby kindergarten, said: “Usually I drop him off in the morning, but today I had to walk him here because it will take longer by car.”

Mr Wee, who works in the IT industry, said that he lives nearby. “Luckily it’s near enough that we can walk here.”

Another driver was overheard saying that her son has to sit an examination in the morning.

A check on the Singapore Examinations and Assessment Board (SEAB) website showed that there were two O-level combined humanities written exams at 8am.

The Straits Times understands that the disruption will be handled by the Ministry of Education (MOE) similarly to any other transit related delay.

The SEAB website says parents of affected students should call the schools and keep them in the loop. Affected students will be given time allowance. They also have the option of going to a nearby examination centre to take the exam.

In a Facebook post at 7.57am, the Singapore Police Force told motorists to “avoid using the roads in the vicinity and to take alternative routes during the closure”.